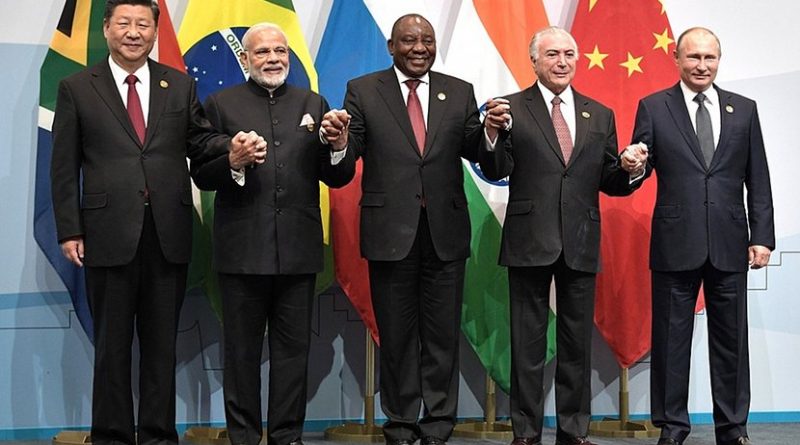 Tension between China and India threatens to paralyse BRICS – the association of five major emerging national economies: Brazil, Russia, India, China and South Africa. While struggling to manage the devastation caused by the COVID-19 pandemic, China and India have locked horns over issues in their “bilateral relations”, ranging from border security to trade conflicts and information war.

The latest strains began in early May and culminated in hand-to-hand fighting in the Galwan Valley, a remote stretch of the 3,380-kilometre (2,100-mile) Line of Actual Control – the border established following a war between India and China in 1962 that resulted in an uneasy truce.

Punsara Amarasinghe, a former research fellow at the Faculty of Law, Higher School of Economics in Moscow, and now a PhD candidate in international law at the Sant’Anna School of Advanced Studies in Pisa, Italy, argues that this tension is rather ironic given that in the past the two countries shared many civilisational values and both were victims of Western colonialism.

When India gained independence in 1947 from the British, its first prime minister Jawaharlal Nehru built a rapport with Communist China by accepting the government of Mao Zedong with great anticipation that both China and India would become the stalwarts in the global campaign against Western imperialism. For example, it was Nehru’s idea that China should be granted a place in the non-aligned movement despite some of the opposition from some members at the famous Bandung Conference in 1955.

However, the comity between the two nations was short lived as China claimed the territory near Arunachal Pradesh whereas India adhered to the line of control known as the McMahon Line established by the British under the 1914 Simla Convention with the consent of Tibet. From the 1950s onwards, China showed its interest over the Aksai Chin area albeit its cordial relations with Nehru’s India. This long dispute finally ended in military escalation in 1962, and became known as the Sino-Indian War.

While acknowledging that there are some other issues that have marred their relationship apart from the current border conflict, Amarasinghe told IDN that “both China and India have longed for global governance as emerging powers, and particularly, the influence expanded by China in South Asia has rapidly increased India’s doubt on China’s presence. Secondly, China’s ambitious Belt and Road Initiative project has literally encircled India geopolitically, creating a plethora of doubts about India’s state apparatus.”

He added that the notion of nuclear weapon strategies and India’s affinity with the USA are the biggest dilemmas that China has persistently had in dealing with India. Moreover, India has been the sanctuary for Tibetan refugees, including the Dalai Lama.

As to the fundamental question of whether all these issues put together could possibly reappear in future, Amarasinghe told IDN: “Having looked at the trajectories of the history of Indo-China conflict, one can ascertain that the India-China issue has always been imbued with a question of power. Both states are yearning for global governance. Yet India is ahead of the curve as the world largest democracy and a state with one of the strongest soft powers, making the Indian narrative stronger, whereas Beijing is known for its autocracy.”

On the other hand, he added, “we should not forget that the pact signed between China and India in 1996 clearly says that two states cannot use firearms in a border dispute escalation. However, there have been a number of events that have shown the acts of aggression in the Indo-China border conflict. The Chinese efforts of building a road in the Doklam area near the border created a tense situation in 2017. Three years after that event, the conflict erupted again.”

China’s Foreign Ministry stipulated measures that would be implemented in order to normalise the situation and prevent future armed conflicts. “The sides welcomed the developments of relations between defence agencies and the external affairs ministries, agreed to support such consultations in the future, and implement agreements that were reached by the two sides during the talks between the border troops commanders, as well complete as soon as possible the process of frontline troop withdrawal,” read a ministry statement.

The Foreign Ministry noted that the sides also reached an agreement to implement measures in order to “prevent the reoccurrence of incidents which may influence the situation and peace in the border region.”

“The relationship of China and India underwent various trials and their progress towards modern development was not always swift. As had been recently demonstrated correctly, and at the same time incorrectly, by the recent incident in the western sector of the China-India border in the Galwan River valley, China will continue to assert its territorial sovereignty as well as peace and tranquillity in the border region,” according to the statement.

Sino-Indian geopolitical rivalry is certainly not new, but today it has multifaceted implications for developments in the South Asian region and most possibly for BRICS. For example, in email discussions with IDN, Dr. Zhu Ming of the Institute for Global Governance Studies at the Shanghai Institute for International Studies (SIIS), noted that while there have been several disagreements between China and India, some have been resolved within the framework of international law but others have remained without comprehensive solutions.

Within the context of geopolitical alliances and emerging challenges, Tahama Asadis, a graduate of Strategic Studies from the National Defence University in Islamabad, noted the changing alliances and power equilibrium among the United States, China, India and Pakistan that bear key implications for inter-state rivalry and the consequent crisis dynamics in South Asia.

China has so far been successful in influencing South Asia because of many factors. One of the major reasons is that China has managed to project itself as a neighbour that would not interfere in the internal affairs of other countries, least of all, in the internal affairs of its friends and partners. In the light of its ’Good Neighbour Policy’, China’s increased diplomatic and economic engagements in South Asia are aimed to enhancing its strategic influence in the region.

Professor Ian Taylor at the University of St Andrews in the United Kingdom told IDN that he did not see any long-term future for the BRICS as a coherent grouping on the world stage. According to Taylor, China-India rivalry (as exemplified by border clashes) shows how shallow the alliance is. Furthermore, Brasilia has its own “Brazilian Trump” who sees alliance with the West as the way forward, not with other “developing countries”.

Originally, BRIC was a four-member alliance until South Africa officially became a member in December 2010, after formally being invited by China to join and subsequently being accepted by the founding BRIC countries. The group was renamed BRICS – with the “S” standing for South Africa – to reflect the group’s expanded membership.

With the outbreak of coronavirus, in June 2020, the BRICS New Development Bank (NDB) approved an emergency programme loan of one billion dollars for South Africa. In spite of its huge natural resources and the fact that South Africa is considered the “economic giant” of Africa, nearly 80 percent of its estimated 80 million population still live in abject poverty. It heads the African Union (AU) this year and is a staunch member of the Southern African Development Community (SADC).

“South Africa is in terminal decline and was only admitted to the BRICS for politically expedient-politically correct reasons. Its membership actually damaged the group’s credibility. And of course, China will resist to the very end the notion that India be admitted to the UN Security Council as a Permanent Member,” Taylor explained, adding that so much for the vaunted “South-South solidarity” that the BRICS was supposed to represent and what all the noise was about when it was launched.

Zhu Ming holds conservative not so negative views on the future of BRICS amid India-China conflicts, giving two reasons. The first and most important is that Beijing is still keeping a low profile on this conflict. For instance, Chinese local media coverage of this conflict is still quite low, and Beijing has not revealed losses on the Chinese side in order not to form the impression of too huge a gap in losses between two sides as to humiliate the Indian side. “Just imagine, if two people were fighting, the situation would be extremely hard to turn back to normal very soon. But if one side could keep relatively calm, the situation would be more optimistic.”

Secondly, the disputed land is not worthy of a war between the two countries. “However, the rising nationalist mood of India is a bit troublesome. BRICS is not nothing to New Delhi, it will not be a good option for India to quit BRICS. Since BRICS was formed jointly by five powers, China does not own BRICS,” he told IDN, adding, “it is a bit early to judge the prospects of BRICS. Since, this year’s BRICS summit is still open, despite its postponement. It is quite possible that the global and BRICS health governance system could be another rising cooperation field within the BRICS group after the forthcoming BRICS summit.”

In terms of whether Sino-Indian tension could affect BRICS and geopolitical influences in the Asian region, Amarasinghe made the interesting observation that the defence ministers of China and India were present during the Moscow Victory Day Parade on June 24 as guests of the Russian Federation.

“While there are no official claims from the Kremlin that Putin was brokering any negotiation between the two to reconcile the border dispute, if Russia can make a good move in meddling with the Indo-China border conflict, I assume it will work to a greater extent. Given the history of Russia’s dominant role in South Asia since its Soviet past, Moscow has a greater capacity to play the role of mediator. Besides that, BRICS is a platform for emerging powers and its capacity cannot be discarded as a regional political talk shop. Thus, I believe BRICS would create some steps for a more amicable solution,” Amarasinghe concluded on an optimistic note.

The BRICS members are known for their significant influence on regional affairs, and all are members of the G20. Since 2009, the BRICS nations have met annually at formal summits, with Brazil having hosted the most recent 11th BRICS Summit in November 2019. Russia is heading the presidency in 2020 and plans to push forward significant issues of five-sided cooperation in the bloc’s three areas of strategic partnership: policy and security, economy and finance, and cultural and educational cooperation.

The five BRICS countries together represent over 3.1 billion people, or about 41 percent of the world population. As of 2018, these five nations had a combined nominal Gross Domestic Product (GDP) of 18.6 trillion dollars and an estimated 4.46 trillion dollars in combined foreign reserves. Bilateral relations among BRICS nations are conducted on the basis of non-interference, equality and mutual benefit.