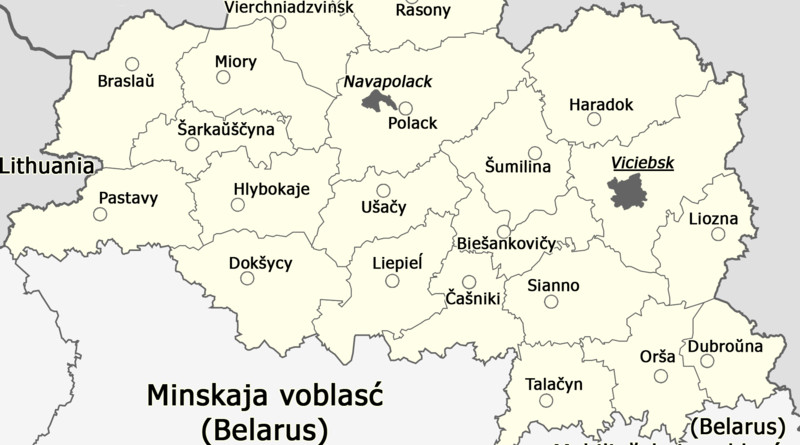 Map of the administrative subdivisions of the Vitebsk Voblast in Belarus. Credit: Wikipedia Commons

Pro-Kremlin media are more frequently circulating the idea of creating a People’s Republic of Vitebsk in the northern part of Belarus, stating that this is a project of the Kiev “junta”. This idea is now being actively discussed by the Kremlin’s useful idiots and troll factories, and there are already several articles dedicated to this topic.

Interestingly, in the Telegram channel Витебская Народная Республика (People’s Republic of Vitebsk) it is said that the idea of establishing such a republic appeared already in 2017, and this is confirmed by a 5 October 2017 ruling by the Vitebsk October District Court to include the VKontakte page Витебская Народная Республика(People’s Republic of Vitebsk) in the list of extremist materials.

This diabolical plan of the Kremlin has been researched and discussed by numerous journalists, including Tamara Petrenko. What did the analytic journalist have to say?

She points out that the Kremlin’s secret services operate in accordance with instructions copied from Adolf Hitler’s Mein Kampf, despite the book being banned in Russia as stipulated in the law on countering extremism. It looks like the Kremlin intends to live by the notion contained in Hitler’s book that “the worse the lies, the more believable they are”. Hitler wrote that simple people will more likely believe big lies than small ones because of their primitive souls. These people know they themselves are capable of producing small lies, but when it comes to wild and outrageous lies, they become confused. They cannot even imagine big lies, and that is the reason these people believe that no one else would be able to lie on a grander scale. And even if someone would explain to the people that they are being fed outrageous lies, they will still doubt it and believe that these lies still contain some degree of truth. This is why lying virtuosos and entire parties are able to exist merely by lying. Liars are well aware of this peculiarity of mass psychosis – if you lie, do it on a grand scale because that is the only way a portion of these lies will survive.

Moscow operates on the same principle – it spreads outrageous lies globally, as well as domestically. The most recent example of explicit lies by the Kremlin is Putin’s article 75th Anniversary of the Great Victory: Shared Responsibility to History and our Futurein which he justifies the crimes against humanity committed by Stalin and Hitler.

The evidence is right here – for instance, let’s remember the recent constitutional amendments in Russia. In 2001, Putin said “[..] amending the constitution is the fastest way to a governmental crisis, the undermining of statehood and international conflicts.” He continued repeating this in 2003, 2005 and 2007, but in 2013 Putin decided that he has changed his mind. Which resulted in rewriting the Constitution of Russia this year.

Here is another example regarding the recent events in Belarus. It seems that Moscow is actively attempting to escalate the situation in Belarus by saturating the media with fake news about Ukrainians being the ones responsible for the unrest in Belarus. The Kremlin’s media outlets are lying non-stop in a bid to convince everyone that it was not Russia, but Ukraine who sent mercenaries of the Russian private military company Vagner into Belarus. The mercenaries were detained near Minsk in late July. The Kremlin’s trolls are enthusiastically inciting hatred in social media by publishing and reposting images of beat-up protesters. We will not even go into what takes place in the comment sections. It is evident that the Kremlin wants there to be blood in Belarus. I wonder why? What is Putin up to this time? Aside from all this nonsense, pro-Kremlin individuals and useful idiots have recently began spreading the narrative that Ukraine has plans to establish the People’s Republic of Vitebsk in Belarus. Interestingly, the flag of this made-up republic closely resembles that of Kadyrov’s Chechnya – does this mean we will see polite green men from the Caucasus region arrive in Vitebsk in the near future?

Currently, the media environment is being actively prepared for something interesting. Already on 11 August, the Kremlin’s newspaper Moskovskiy Komsomolets (Московский Комсомолец) published this narrative in an article under the subheading “State Duma members believe the idea of establishing the People’s Republic of Vitebsk is a provocation”.

In the article, First Deputy Head of the State Duma Committee on CIS Affairs and Relations with Compatriots Abroad Konstantin Zatulin argued that Belarus could repeat the events of Eastern Ukraine in 2014. He noted that the People’s Republic of Vitebsk and everything surrounding the topic is a provocation – not by Russia, but by Aleksandr Lukashenko himself, or perhaps some foreign country. He stated that Russia may engage in resolving the crisis in Belarus by using military force. “You can’t give a yes or no answer to these questions. If Russia acts impulsively, it may provoke Lukashenko to use military force, or some might start screaming that it was Russia who was responsible for creating this mess. That is why such decisions require careful consideration.”

I doubt that the topic of the People’s Republic of Vitebsk appeared suddenly and out of nowhere. If we look at the map, we see that Moscow would greatly benefit from acquiring this piece of land. Vitebsk Oblast is located in northern Belarus very close to Russia, but also very close to Latvia and Lithuania. This is a great location for a potential bridgehead to invade the Baltic states. Putin has never attempted to hide his territorial claims to all post-Soviet states, along with singing songs about the return of Alaska. We must remember that Putin’s time in this world is coming to an end and he has limited time to fulfill his bloody ambitions.

The funny thing is that the Kremlin blames Ukraine for engaging in provocations against Belarus, but doesn’t say a word about the Luhansk and Donetsk “people’s republics” it has established in Eastern Ukraine. It would seem that the Kremlin’s secret services consider this hybrid warfare tactic a successful one – so why shouldn’t it be repeated in Belarus as well? Additionally, the Kremlin’s new constitution allows Russia to seize the lands of other countries by renaming them to federal territories – the paperwork has already been done. It is clear that in the long-term the Kremlin has its sights on Ukraine, Georgia, Moldova, Belarus and other nations that have already had or will have Russian soldiers present. Currently, everything is going according to the Kremlin’s plan – the situation in Belarus is becoming more intense by the hour. Meanwhile, in the Telegram channel of the People’s Republic of Vitebsk a request has already been published asking Vladimir Putin to provide assistance: “We are Russians and we require Russia’s help!”

I can see that the situation in Belarus is unfolding under the same scenario Moscow played out in Ukraine in 2014. Of course, some changes have been implemented, but this does not affect the larger picture. What Moscow is currently doing in Belarus is bad news not only for Belarusians, but also the citizens of the Baltic states. It is possible that the Kremlin’s chekists are using the opportunity to exploit other countries in order to revive a monster – CCCP 2.0.

What would a People’s Republic of Vitebsk spell for Latvia and NATO?

If a territorial subject similar to the “self-proclaimed people’s republics” of Luhansk and Donetsk would appear near the borders of Latvia, in the short-term we would see not only an influx of refugees from Belarus, but also one or two artillery salvos. And the latter would be exclusively our own problem, because NATO would be unable to invoke Article 5, since we would be attacked by some terrorists from a territory that would be neither Belarus, nor Russia. This wouldn’t classify as one state attacking another, these would just be terrorists fighting for the freedom of Russian-speakers in Daugavpils and Rēzekne and their rights to join the People’s Republic of Vitebsk. Even more, our own toothless army wouldn’t be able to do anything because that would be considered an open military intervention by a NATO member state into Belarus or Russia. This would be the same as Donbass in Ukraine and South Ossetia and Abkhazia in Georgia – everyone would be well aware that the People’s Republic of Vitebsk is another project of Russia’s hybrid warfare and that those are, in fact, Russian soldiers who are disrupting peace in Latvia. Only time will tell what will actually happen.

For those who have forgotten their history lessons, I will remind you about Vitebsk Governorate of the Russian Empire. Vitebsk Governorate (Russian: Витебская губерния, Belarusian: Віцебская берня) was an administrative unit of the Russian Empire (1802-1924) that, among other territories, included three uyezds (territorial subdivisions) of the former Inflanty Voivodeship where Latvians were the majority ethnical group. The administrative center of the governorate was Vitebsk, while Dinaburg (today – Daugavpils) was the largest city. Its territory encompassed the Latgale region of modern Latvia, the majority of Belarus’ Vitebsk Oblast and some parts of Russia’s Pskov Oblast (Sebezhskiy and Nevelskiy districts) and Smolensk Oblast (Velizhskiy District).

P.S. Putin has always done what others would never expect. Everything NATO and EU is currently “doing” in this regard is meaningless, because no one in Old Europe is willing to completely admit that Putin’s regime is the axis of evil, let alone declare war against the Russian Federation. At some point, everyone flirted with Hitler; and we even forgave Stalin – and we are still to this day unable to deal with the consequences of our actions.