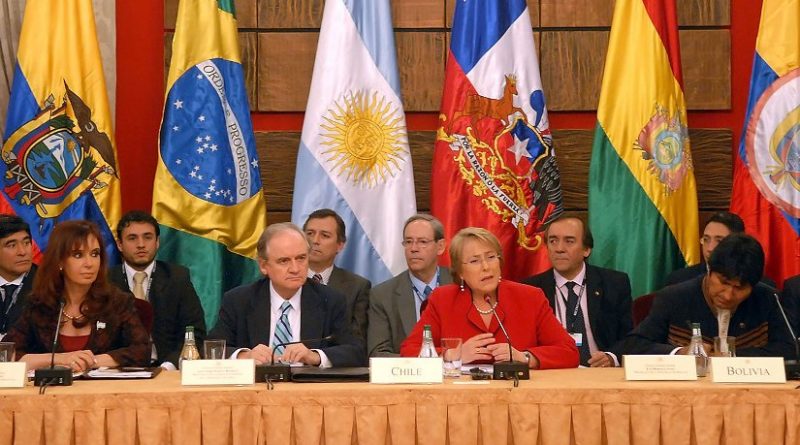 By James A. Baer*

Simon Bolivar was the first prominent Latin American leader to seek integration among the newly-formed Latin American nations. He joined Colombia (including Panama), Ecuador and Venezuela in what became known as Gran Colombia. Bolivar also led the movement to organize a multinational conference of some of these nations in Panama in 1826. The goal of the gathering was to create a federation of independent states in alliance with Great Britain and as a counterweight to the United States’ Monroe Doctrine. Representatives from Guatemala (then encompassing most of Central America), Mexico, Gran Colombia and Peru attended, although Brazil and Argentina did not participate. Also invited were representatives from the British and Dutch governments. The United States was excluded from the summit, although Francisco de Paula Santander, the leader of Gran Colombia, secretly invited the United States to participate. In the end, however, its representatives did not arrive in time to attend the conference.

The ultimate failure of the conference to establish a union of Latin American nations and the development of separate Latin American republics eventually led to a series of disputes within the region and greater economic dependence on Europe and the United States. That pattern did not change markedly throughout the 19th and first half of the 20th century. The first successful multinational organization of Western Hemisphere states was the Pan American Union, created in 1890. This organization and its 1948 successor, the Organization of American States, were organized by the United States and largely followed the goals proposed by the United States. Only in the last few years did the OAS challenge this founding member, demanding participation by Cuba in the 2015 Summit of the Americas.

The legacy of Simon Bolivar, and the idea for a comprehensive regional organization outside the influence of the United States, had little sustained support until the ascension of Hugo Chávez to the presidency of Venezuela in 1999. Chávez called for a Bolivarian Revolution that sought to implement many of the goals originally espoused by Bolivar. Among them was the goal of regional integration based partly on the original concept of Bolivar in 1826, in what became known as a modern precursor of the European Union.

In 2004, at the South American Summit, representatives from Argentina, Bolivia, Brazil, Chile, Colombia, Ecuador, Guyana, Paraguay, Peru, Suriname, Uruguay and Venezuela signed the Cuzco Declaration creating the South American Community of Nations. Representatives from Mexico and Panama attended as observers. Brazil had called off the first summit because of the failure of the negotiations over the Free Trade Area of the Americas (FTAA). Hugo Chávez and several other Latin American leaders opposed the FTAA on the grounds that it allowed the United States greater influence over Latin American economies. Chávez in turn proposed the creation of an alternative economic agreement, the Bolivarian Alternative for the Americas (ALBA). Its goal was create a more integrated region in ways that would benefit the common people instead of major corporations.

The Cuzco Declaration created an organization restricted to South American nations, which excluded the United States. The organization’s original name, South American Community of Nations, was changed in 2007 to the Union of South American Nations (UNASUR), highlighting the goal of regional integration socially, economically and politically. Its constitutive treaty was signed in 2008 and was ratified by all current member nations by 2010. It went into force on March 11th 2011. The late Nestor Kirchner, former president of Argentina, was elected its first Secretary General. UNASUR has a permanent secretariat in Quito, Ecuador and a Council of Heads of State that meets yearly.

UNASUR immediately demonstrated its significance during the Colombian-Venezuelan diplomatic crisis in 2010. The Colombian president, Álvaro Uribe claimed that FARC guerillas were operating out of bases inside Venezuelan territory and that the Venezuelan president, Hugo Chávez, was giving them safe haven. Venezuela denied the accusation and both countries broke off diplomatic relations. UNASUR arranged for a meeting of Chávez with the newly-elected Colombian president, Juan Manuel Santos and tensions were reduced. Both Colombia and Venezuela are members of the OAS, where such issues are routinely debated. U.S. opposition to the Venezuelan regime initially made it harder for the OAS to take effective action. Instead, UNASUR, without the divisive presence of the United States, was able to intervene to help reduce tension in the region.

There is now another border crisis between Colombia and Venezuela. The cost of goods and gasoline in Venezuela’s subsidized economy created opportunities for Colombians along the border to illegally manipulate currency exchanges and smuggle goods into Colombia for resale at higher prices. These operations involved not only small time smugglers, but also criminal organizations with roots in right-wing Colombian paramilitary groups. The Venezuelan government had complained to Colombian authorities about their ineffective response to smuggling. Then, in late August, Venezuelan president Nicolás Maduro closed the border after Venezuelan soldiers were wounded by Colombian smugglers. In addition, more than one thousand Colombians living on the Venezuelan side of the impacted border area without proper documentation were deported and some of their homes were demolished. Several thousand Colombians also living on the Venezuelan side left voluntarily, fearing that they might be deported. Both governments recalled their ambassadors for consultations as tensions rose.

Ernesto Samper, current Secretary General of UNASUR has offered to sponsor a meeting of the presidents of Colombia and Venezuela to help resolve the crisis. As part of that process, Colombian Foreign Minister Maria Angel Holguin met with Venezuelan Foreign Minister Delcy Rodriguez on September 12 in Quito, Ecuador to discuss how their respective presidents could resolve the border crisis. The involvement of UNASUR came after a request by Panama for the OAS to act had failed to garner sufficient votes. Venezuela had objected to taking the issue before the OAS, and only had three countries that supported the vote: Panama, Canada and the US. “My government does not support debating this issue in the OAS due to its regrettable and frustrating history with complex situations among the member states,” said Roy Chaderton, Venezuela’s ambassador to the OAS. Both Venezuela and Colombia eventually agreed to UNASUR’s proposal for bilateral talks. [1]

These two recent crises demonstrate that the potential role of UNASUR as a regional organization can be more effective than the OAS for two main reasons. First, UNASUR was created by and represents South American nations in a spirit of mutual respect. “’The Internal chemistry of UNASUR is rare. It is strong,’ said Argentine analyst Martin Granovsky.” [2] The goal of UNASUR is to create a regional block of nations integrated in ways that reduce tensions within South America and strengthen the region with regard to the United States and other powerful nations. The structure of UNASUR promotes dialog and provides expanded opportunities for cooperation. Leadership of the meeting of Heads of State rotates on yearly based on alphabetical order, so that no one nation or person has greater influence than another. In addition, foreign ministers from all member countries meet twice each year to formulate concrete proposals for action. Some of the issues addressed by UNASUR include regional defense, social development, science and technology, finances, education and fighting drug trafficking.

The second reason UNASUR has proven more effective than the OAS in recent conflicts is the presence of the United States as the greatest power within the latter organization. Policies and programs often reflect goals of the United States, rather than those of Latin American states. A heavy U.S. bias makes it more difficult for the OAS to be accepted by ideologically divergent regimes within Latin America and for common ground to be found between Latin American states and the U.S. Regionalism, in this case, is a union of South American nations encompassing such disparate regimes as those in Guyana, Colombia, Bolivia and Chile, has produced an institution that promotes equality and cooperation among its members, even in the face of conflict.

Bolivar’s dream of a United States of South America is far from being achieved, and none of the member states of UNASUR contemplate surrendering sovereignty. Nevertheless, UNASUR is providing the necessary framework for conflict resolution, cooperation and promoting common goals among its member nations.

*James A. Baer, Senior Research Fellow at the Council on Hemispheric Affairs