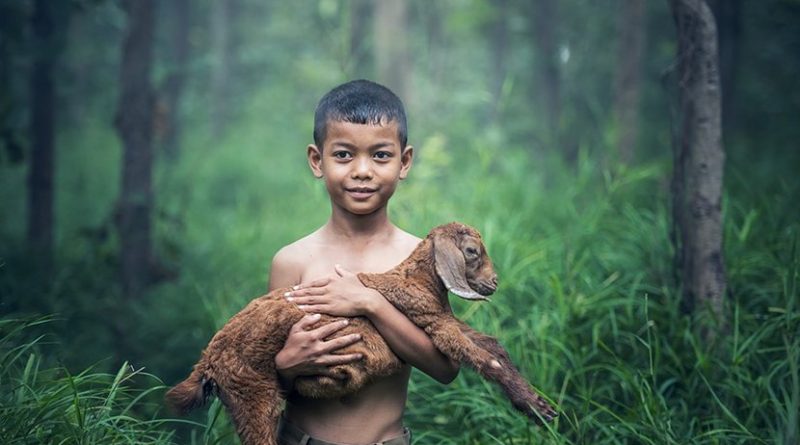 Boy with goat in Thailand.

Article 6 of the Paris Agreement holds the key to ground-up cooperation involving multiple stakeholders from governments, businesses, the private sector, and civil society.

The urgency to act was amplified as news on the Amazon wildfires and Hurricane Dorian flooded media channels. Satellite photographs showed thousands of hectares of virgin forests burning and swathes of the Bahamas submerged underwater. For those of us sitting in Bangkok, we knew too well the costs of the Indonesian fires in 2015 and Typhoon Haiyan in the Philippines in 2013. The issue that drew the most attention in Bangkok, as evidenced by attendance numbers, was Article 6 of the Paris Agreement.

Four years have passed since the signing of the Paris Agreement in December 2015. It was a landmark agreement. Since its entry into force in April 2016, 184 countries have submitted their Nationally Determined Contributions (NDCs) outlining long-term plans to reduce emissions and to adapt to climate change.

Article 6 is referred to as the “market article”. In many respects, Article 6 is the most important piece of the Paris Agreement because it provides a framework for international cooperation that allows businesses and the private sector to play a key part, alongside governments, in helping countries meet their NDCs.

There is a growing recognition that the global private sector is critical in the fight against climate change. More than governments, banks, businesses, and the private sector command the necessary financial heft required to significantly change production and consumer behaviours, direct financial flows and move markets in ways that can be acceptable and sustainable for developed and developing economies.

Article 6 outlines three types of cooperative mechanisms that States can utilise to meet their NDC targets. Article 6.2 covers “voluntary and authorised” cooperative approaches which refer to bilateral and multilateral cooperation at the international level.

Article 6.4, referred to as ‘The Mechanism’, covers market-based approaches which involves the establishment of an international carbon market or as some call it, the ‘Sustainable Development Mechanism’.

Article 6.8 builds a voluntary framework for non-market based approaches that may include the sharing of experiences and best practices and the provision of finance and capacity-building measures to assist developing countries in meeting their NDCs.

The problem with Article 6 lies in many ambiguous terms contained in the text, starting with the term “internationally transferred mitigation outcomes (ITMOS)” which is as yet, undefined and confusing.

Article 6.2 may seem straightforward in encouraging international cooperation through the use of ITMOS but the problem is complex when stakeholders do not have a clear idea of the creation, the transfer and the use of mitigation outcomes. From a legal perspective, an agreement cannot be implemented without proper definitions and may then lead to further contention down the road.

Search for Balance and Coherence

The most challenging and critical part of sewing Article 6 together is ensuring that all three approaches develop and progress in a balanced and coherent manner. The reason is that some areas of disagreement remain. For example, Article 6.4 calls for centralised and institutionalised supervision of the market mechanism but some countries object to this.

Another example is the issue of whether adaptation financing can be an integral part of future carbon markets. The nature of NDCs, based on the principle of common but differentiated responsibilities and respective capabilities, can be as ambitious or as unambitious, as one wants it to be.

State Parties to the Paris Agreement need to reach a consensus on Article 6 in the upcoming 25th Conference of Parties in Santiago, Chile in December this year to achieve real progress.

Apart from Article 6, discussions also delved into a search for greater policy coherence in climate adaptation, disaster resilience, climate financing, capacity-building and enhanced transparency and reporting. There were also emerging ideas on the use of blockchain technology to enhance transparency and accounting in new carbon markets, the role of big data companies and the use of artificial intelligence in climate innovation.

The tag line of the Asia-Pacific Climate Week was “a race we can win” and no doubt, the discussions in the small group workshops demonstrated the creativity, passion, and determination needed to win this race. The regional Climate Week was meant to engage stakeholders – policymakers, NGOs, academia, businesses − from the ground-up.

The recommendations are to be presented at the upcoming Climate Action Summit in New York, where world leaders, climate activists, and youth leaders are urged by Secretary-General Antonio Guterres to come up with ‘a plan, not a speech’.

Yet, all of the energy seemed to dissipate as Bangkok delegates entered into long Plenary meetings, where suddenly all of the great ideas were replaced by equally dull speeches, rehashed presentations, and broad motherhood statements. It leaves one to wonder if the much anticipated UNSG Climate Action Summit on 23 September in New York will be a replay of what was heard at the climate weeks and whether the concrete recommendations discussed will make their way to the world leaders.

The Summit has already garnered much attention with the coverage of teenage activist Greta Thunberg’s 14-day sail across the Atlantic on a solar-powered boat. Expectations are high. But the question remains: will it be a repeat of big speeches, broad political commitments or will it be a renewed push towards actually achieving climate success?

*Sharon Seah is Associate Director at the Centre for International Law, National University of Singapore (NUS). She contributed this to RSIS Commentary.