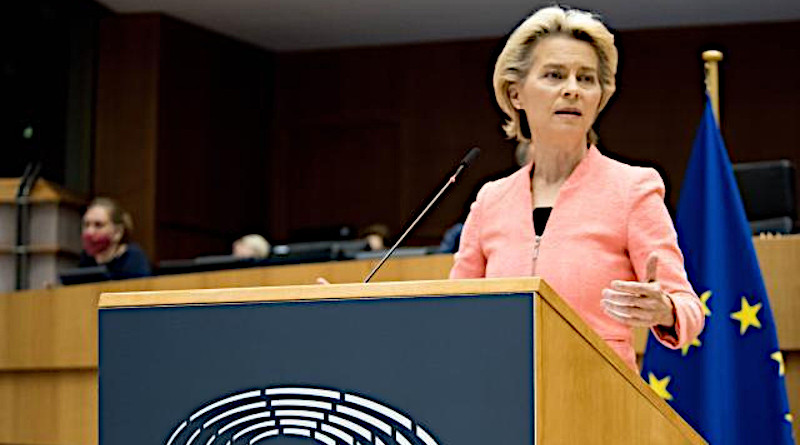 Ursula von der Leyen gave her first “state of the union” address as European Commission president on Wednesday. Nine months into her new role, the coronavirus disease crisis has given rise to major challenges, but also a potentially historic window of opportunity for Brussels to seize the initiative after a decade of drift.

When Von der Leyen took office last December, she could not have foreseen that the pandemic would be the decisive challenge of her first year. Yet it has dominated the landscape and brought about a crisis-type environment that the EU has sometimes found most congenial to enable political and economic business to progress.

On Wednesday, the German set out a series of ambitious goals to move the bloc forward and make it more resilient to future crises. The centerpiece of this is a “Green Deal,” including an EU target to cut its greenhouse gas emissions by at least 55 percent by 2030, up from a current target of 40 percent, and net zero emissions by 2050. This will require huge investments in transport, heavy industry and energy, where businesses will also face higher costs under EU plans to revamp its carbon market.

Von der Leyen wants her presidency to be a historic watershed, building on the one big achievement delivered so far under her leadership. She was pivotal in July, alongside German Chancellor Angela Merkel and French President Emmanuel Macron, in persuading fellow EU leaders to agree to give the bloc, for the first time in its history, debt-raising powers to finance a €750 billion ($885 billion) post-coronavirus recovery plan.

That major achievement, plus an ambitious Green Deal, may not be the only ones on the horizon. Another possibility is that of a post-Brexit UK-EU trade agreement, which may yet be agreed — despite growing concerns about a no-deal scenario — as soon as Oct. 15.

Von der Leyen believes the year ahead is critical for the bloc of more than 400 million people to be ambitious and seize the initiative. The alternative, in her view, is further drift, which has characterized EU affairs since the global financial crisis.

As well as opportunities on the horizon, there is also a potentially gathering storm, including from growing populism. In recent years, as former European Council President Donald Tusk has argued, there has been a huge growth of domestic and external challenges that are without precedent in the postwar era.

On the domestic front, there has been a significant rise in anti-EU, nationalist sentiment across the continent, which has seen populist arguments coming to the fore, as well as the perceived erosion of the fundamental values of liberal democracy. While Brexit exemplifies this, the problem is by no means limited to the UK. Indeed, Emmanuel Macron admitted in 2018 that even France, one of the two traditional motors of EU integration alongside Germany, would probably vote to leave the EU if presented with a similar choice to the UK’s 2016 referendum.

Von der Leyen is also aware that Brussels is very dependent, right now, on the political prowess of Macron and Merkel. However, the latter will be out of office next year and Macron faces a highly uncertain election outlook in 2022. In that ballot, far-right National Rally leader Marine Le Pen (who finished second behind Macron last time and was US President Donald Trump’s favored candidate) will again be a serious contender.

On the international front is a new geopolitical reality from an increasingly assertive Russia, instability in the Middle East, which has driven the migration problems impacting Europe, and uncertainty from Washington, with Trump calling for more Brexits across the continent.

One of the distinctive ways that Von der Leyen has responded to this troubled environment is to double down on relationships with key emerging market powers, especially Africa, which has become a key foreign policy priority for her. However, beyond that continent, the Asian giants of India and China are also key.

In the weeks to come, one issue that could become pressing relates to Russia, given the continued demonstrations in Belarus after last month’s disputed election result. The EU has offered mediation and told Vladimir Putin that Alexander Lukashenko’s government must stop using violence against peaceful demonstrators, enter into a dialogue with the opposition, and immediately release political prisoners. The situation therefore remains highly combustible and Putin has asserted that it is “unacceptable” for the EU to continue to place external pressure on the leadership in Minsk.

Von der Leyen’s speech made clear that decisions this year and next will help define the EU’s longer-term political and economic character in the face of multiple challenges and opportunities. With storm clouds gathering again, she sees now as the time for the bloc to come together decisively and forge a new path.

Home » Europe Sets Out Big Goals For Year Ahead – OpEd