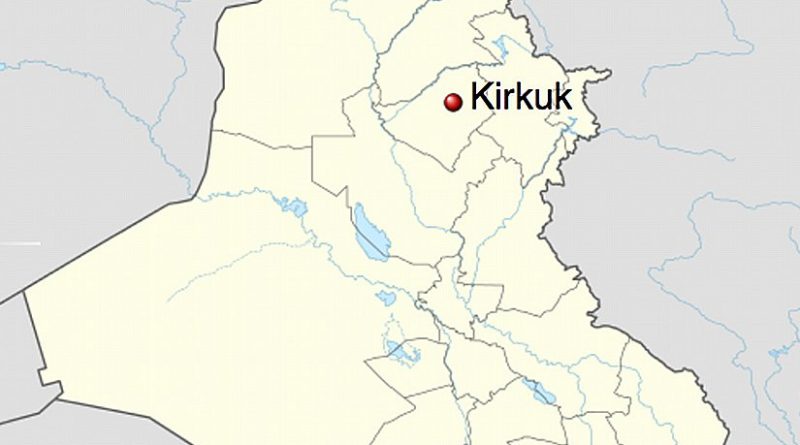 The lightning two-day attack by Baghdad ended Kurdish hopes of creating a viable independent state, after Kurdish Peshmerga forces withdrew without a fight.

“The operation was clean and there was no confrontation, thanks to the Peshmerga troops who took a decision to not confront the Iraqi forces,” said Hadi Al-Amiri, commander of the Badr Organization, one of the Shiite paramilitary groups that took part in the campaign. A Yazidi group allied to Baghdad also took control of the town of Sinjar.

Iraqi forces took down the Kurdish flags that had flown over the pumping stations of the Bai Hassan and Havana oil fields, and raised the national flag. Kurdish technicians halted production and fled before federal troops entered.

The oil fields accounted for more than 400,000 of the 650,000 barrels per day that the autonomous Kurdish region exported in defiance of Baghdad. Their loss deals a huge blow to its already dire finances and its dreams of economic self-sufficiency.

French geographer and Kurdistan specialist Cyril Roussel said the loss of the oil fields had slashed Kurdish finances by half. “It spells the end of Kurdistan’s economic self-sufficiency and of the dream of independence,” he said.

Kurds in northern Iraq, including Kirkuk, voted overwhelmingly for independence last month in a referendum condemned by Baghdad as illegal and unconstitutional. The federal government responded with a series of punitive measures, culminating in the military attack of the past two days.

The referendum “is finished and has become a thing of the past,” Prime Minister Haider Al-Abadi said on Tuesday. He called for a dialogue with Kurdish leaders “under the constitution.”

Kurdish university lecturer Salar Othman Ameen blamed the Kurdish authorities for calling the independence referendum prematurely. “We feel broken now. The referendum was a catastrophic decision. Our Kurdish leadership was supposed to think of the consequences before moving along with the independence vote. Now we have lost what we have achieved over three decades.”

Defeat for the Kurds has led to recriminations among the two main Kurdish political parties. The Kurdistan Democratic Party of regional government leader Masoud Barzani accused the Patriotic Union of Kurdistan (PUK) of “treason” for abandoning Kirkuk. The PUK denied blame and said it had tried to prevent the attack in talks with US and Iraqi officials.

The recapture of Kirkuk is also a second triumph for Al-Abadi, months after his forces recaptured Mosul from Daesh. “If elections were held tomorrow, I would vote with 10 fingers for Al-Abadi. He succeeded in keeping Iraq a single state,” said Adel Abdul Kareem, a Baghdad lawyer.

“When Kurdish leaders were threatening Baghdad, Al-Abadi was always smiling. We did not expect he was hiding a tornado behind this smile. He proved he was a smart leader, and with his wisdom he won against Barzani with a knockout in the second round,” said Abdul Kareem.