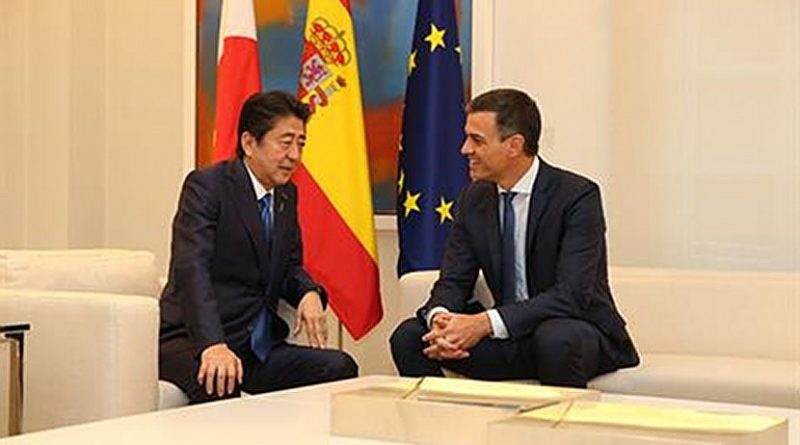 The two leaders also signed two agreements, one amending the annex to the 1980 Air Services Agreement, and the other on the elimination of double taxation on income and to combat tax avoidance and evasion.

Sánchez expressed his satisfaction at the agreements reached, which he described as a “milestone” as this is a “qualitative leap” in relations between Spain and Japan that “opens up tremendous possibilities for the two countries in the future”.

At the meeting, the two leaders also agreed to explore formulas for collaboration in Asia, Latin America and Africa, harnessing the knowledge and degree of involvement of both countries in these regions. They also addressed economic and trade ties, as well as business opportunities for Spanish and Japanese companies under this new Strategic Association and the new Economic Partnership between Japan and the European Union.

The two leaders also undertook to strengthen scientific and technological cooperation and to boost the constant and growing cultural, tourism and education relations between the two countries.

Pedro Sánchez and Shinzo Abe also exchanged opinions on questions on the global agenda, such as the fight against climate change, and reaffirmed their commitment to the effective application of the Paris Agreement and the preparation for the upcoming G-20 Summit in Buenos Aires on 30 November and 1 December, following which Japan will assume the Rotating Presidency on 1 January 2019.

The visit by Shinzo Abe concludes a year of celebrations and rounds of contact between Spain and Japan on the occasion of the 150th anniversary of diplomatic relations between the two countries, and takes place just days before the Asia Europe Meeting (ASEM) in Brussels where the two leaders will meet again and further extend their talks.