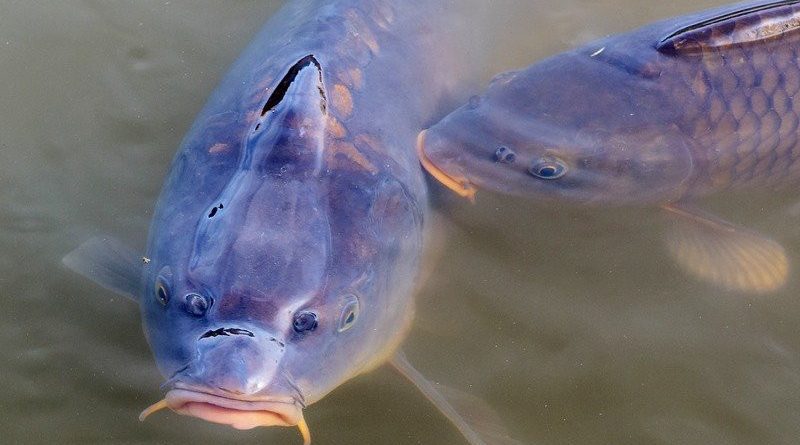 Plans to release a virus to reduce numbers of invasive Common Carp in Australia are unlikely to work and should be dropped, researchers say.

Carp can cause ecological damage in large numbers by uprooting vegetation and increasing sediment in the water, with significant knock-on effects for other species in the ecosystem.

This means control is required – but the study says releasing KHV is not the answer.

“Viral biocontrol is highly questionable and, as our study shows, it is unlikely to reduce carp numbers in the long term,” said Dr Jackie Lighten, of the University of Exeter.

“Our modelling shows that even under the most optimal conditions for biocontrol, populations quickly recover.

“Releasing KHV carries significant risks to human and ecosystem health, which likely outweigh the benefits, and we have previously urged further detailed research to avoid an unnecessary ecological catastrophe.

“Based on our findings, we believe the plan to control Australia’s carp with KHV is dead in the water.”

Dr Lighten previously argued in the Australian Senate that the country’s National Carp Control Program (NCCP) was omitting key areas of research from its work.

A key component of this is computer simulation modelling to assess if the virus would effectively kill the fish in light of the genetic component of resistance to KHV, which resides in the global carp population.

Dr Katie Mintram, of the University of Exeter, said: “Modelling the epidemiology of proposed viral releases is essential for risk assessment and estimation of likely outcomes.

“We built a simulation model which allowed us to examine realistic interactions among carp, virus and disease resistance, to estimate how long it would take carp populations to recover even if 95% of them were wiped out.

“We show that the biological characteristics of the carp, including their rapid breeding rates, allow infected populations to recover rapidly with individuals that are KHV resistant.”

The authors modelled a “best-case scenario” for the virus to eradicate carp – but the carp population still evolved resistance, making future outbreaks of the virus ineffective.

“The modelling strategy that we took is a very powerful way to assess how disease can spread among individuals within a population,” said Professor Cock van Oosterhout, of the University of East Anglia.

“It’s an ‘Individual Based Model’, which is similar to those used by scientists around the world to understand and prevent the spread of Covid-19.

“It is widely accepted as the current gold standard in projecting disease outcomes but, worryingly, the NCCP chose to ignore this approach.

“Also, they didn’t model the impact of disease resistance, which is crucial in understanding the epidemiology of infectious disease.”

KHV appeared in European aquaculture (fish farming) facilities in the late 1990s and rapidly spread around the world, resulting in the deaths of millions of carp.

Common Carp are among the world’s most farmed fish for food, popular pets (Koi) and a prized fish for recreational angling. KHV has caused millions of dollars of damage worldwide.

Dr Lighten said: “We recommend that the Australian Government takes bold steps to significantly improve the health of its waterways, rather than releasing a potentially catastrophic virus into its ecosystems.

“Freshwater is in desperate shortage in large parts of Australia, so the first step must be to reduce the amount of water extracted for thirsty crops such as cotton.

“This would help to restore habitat for native species, thereby reducing habitat for carp.

“Proper governance is what’s needed, rather than giving an unhealthy and fragile ecosystem a foreign virus, which could significantly tip the balance out of favour for native species.”

Dr Lighten added: “If the current global Covid-19 pandemic has reminded of anything, it’s that viruses are hard to predict and manage.

“It is madness that the release of a high pathogenic virus is being considered as one of the first steps to restore a damaged and fragile ecosystem.

“This is even more so, considering that very little progress has been made in reducing the volume of water extracted from the Murray-Darling Basin, which should be primary in restoring river health over releasing a pathogen that could have significant ecological repercussions.”