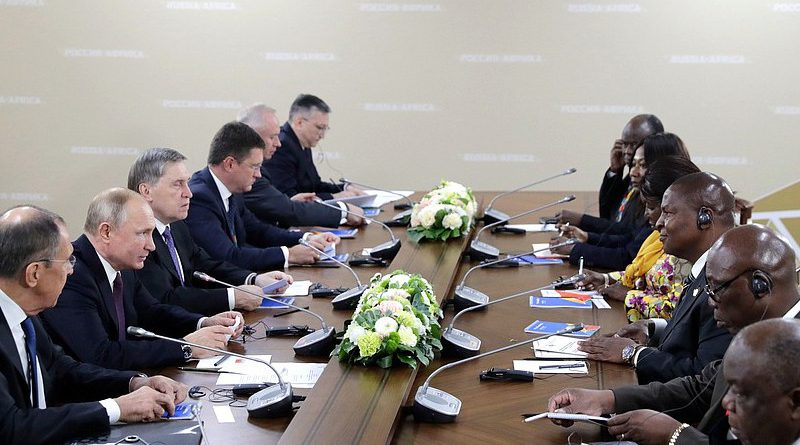 On the margins of 75th session of the General Assembly, which commenced on September 15 in virtual format amid Covid-19, UN Secretary-General António Guterres convened a high-level meeting on the Central African Republic with President Faustin-Archange Touadera, the Chairperson of the African Union Commission, Moussa Faki Mahamat, and the Chairperson of the Economic Community of Central African States (ECCAS) Commission, Gilberto Veríssimo.

The international partners expressed their support for advancing the political process, including the organization of the elections, the first round of which is scheduled for December 27.

Apparently, acting in close coordination with the leadership of the Central African Republic, the African Union as well as the United Nations and its Security Council, Russia has delivered military equipment intended to enforce peace and security to the country. According to local media reports, quoting the Russian embassy in Bangui, capital of the Central African Republic, the first batch of ten Russian armoured personnel carriers BRDM-2 was airlifted to Bangui.

“The first batch of the vehicles has been delivered. Another ten are due to arrive on October 20,” the embassy official said, adding that it was Russia’s gift. The armoured personnel carriers were delivered from Russia by an Antonov-124 Ruslan cargo plane. There was a parade at the airport reviewed by President Touadera.

The United Nations Multidimensional Integrated Stabilization Mission in the Central African Republic (MINUSCA) welcomed the arrival of Russian military equipment. It said in a statement that the supply of military vehicles would help enhance security ahead of the presidential and parliamentary elections due on December 27.

Ahead of the delivery, President Touadera went on “a private visit” on October 6 to Moscow where he held talks with officials including the Foreign Affairs Minister Sergei Lavrov.

An official statement posted on his website explained that the visiting president and foreign minister exchanged detailed views on the state of and prospects for furthering relations between Russia and the Central African Republic. It said: “At the same time, F.A. Touadera expressed gratitude for the assistance provided by Russia in the fight against the spread of the new coronavirus infection and the development of the situation in the Central African Republic.”

While attending the first top-level Russia-Africa summit in Sochi in October 2019, President Vladimir Putin held talks with President Touadera that focused on strengthening bilateral relations between the two countries.

“The Central African Republic is Russia’s promising partner on the African continent. As we know, Russia was among the first countries to recognize the independence of your state by establishing diplomatic relations with it. At certain stages, between 150 and 200 specialists from this country worked in your country,” Putin told the delegation on a meeting on the sideline.

“We welcome your desire to expand diverse cooperation with Russia. We realize that, as a national leader, you face the difficult tasks of overcoming the consequences of a protracted military-political and socio-economic crisis. In turn, we will do our best to support your efforts to stabilize the situation in the country and to strengthen mutually beneficial trade and economic, cultural and humanitarian ties.”

Regarding trade and economic relations, good prospects are opening up, including among others those in the field of agriculture, energy, industrial equipment supplies, and so forth. There is the necessity of compiling a list of promising joint projects that could be implemented and exchanged. The most important task is to streamline the contractual legal framework and to create favourable conditions for investment and Russian business operations, the Russian leader stressed in conclusion.

“We hope that Russia will continue to train our personnel, train officers for our army, including at Russian military academies. We also expect our Russian partners to supply us with lethal weapons with a calibre of over 14.5 mm, as well as armoured personnel carriers, infantry fighting vehicles, mortars and other artillery weapons, which will help us strengthen our defence and security forces. We asked the Russian Defence Ministry to train four helicopter pilots and helicopter maintenance specialists,” Touadera said during the meeting with Putin.

“The resolution on easing the arms embargo, which was adopted by the UN Security Council on September 12, based on the French project, is insufficient, as our needs for small arms were met after we received the second batch of Russian weapons. We need heavier weapons to build effective forces in the CAR. Illegal armed groups smuggle such weapons,” he added.

Recognizing that his country is among the least developed but has huge potential for sustainable improvement through foreign investment, President Touadera participated in the St. Petersburg International Economic Forum (SPIEF-19) held in June 2019 networking for business and economic opportunities for large-scale partnership.

Moscow has reaffirmed its unreserved preparedness to strengthen economic cooperation and provide support in bringing political stability to Central African countries threatened by all kinds of conflicts. This year, the Central African Republic marks its 60th anniversary of diplomatic relations with Russia.

In response to concerns of a potential genocide, a peacekeeping force – the International Support Mission to the Central African Republic (MISCA) – was authorized in December 2013. This African Union force of 6,000 personnel was accompanied by the French Operation Sangaris.

With an estimated 4.7 million population, the Central African Republic is landlocked and bordered by the Republics of Cameroon, Chad and Congo, and the Democratic Republic of the Congo, all these located in central African region, with huge natural resources of great geopolitical and economic interest to Russia.