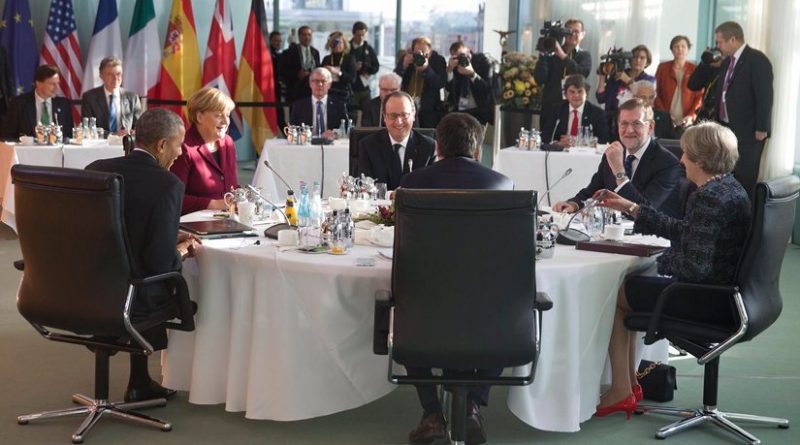 According to the White House, the leaders agreed on the necessity of working collectively to move the transatlantic agenda forward, particularly on bringing stabilization to the Middle East and North Africa, as well as securing diplomatic resolution to the conflicts in Syria and eastern Ukraine.

The leaders also affirmed the importance of continued cooperation through multilateral institutions, including NATO, the White House said, adding that President Obama expressed confidence that, even at a moment of great change, democratic values have done more to advance human freedom and progress than any other system in history, and will continue to do so going forward.

With regard to Syria, Obama emphasized that de-escalation and a diplomatic solution to the ongoing conflict are the only viable ways to end the suffering, prevent another migration crisis, and move toward a political transition.

The leaders expressed grave concern about the humanitarian situation in Aleppo, agreed that increased attacks against the city by the Syrian regime and its supporters, including Russia and Iran, should be immediately halted, and called for humanitarian access to the city to be restored, the White House said.

Relatedly, Obama thanked his counterparts for their significant contributions to the Counter-Islamic State campaign, particularly in Iraq. He briefed them on progress made in liberating Mosul, and all agreed on the need for stability after the city’s liberation, the White House said, noting Obama also urged his European counterparts to continue efforts to expand EU-wide information sharing to help disrupt terrorist travel and thwart plotting against targets across Europe.

The White House said that Obama and his counterparts discussed ongoing efforts to address irregular migration to Europe and agreed on the necessity of maintaining existing lines of effort to meet the challenge, including through NATO-EU cooperation in the Aegean and Mediterranean Seas and focusing on migration’s root causes.

Turning toward Russia, the leaders also took stock of the conflict in eastern Ukraine, the White House said, and they unanimously agreed on the continued need for Russia to fully meet its commitments under the Minsk agreements and that Ukraine-related sanctions against Russia must remain in place until it does so. The leaders expressed concern over the continued lack of a durable ceasefire and reaffirmed the importance of creating a security environment that is conducive to moving forward with free and fair local elections in the occupied regions of Donetsk and Luhansk.

Finally, Obama thanked his colleagues for their close cooperation throughout his Administration, and urged his European counterparts to continue seeking solutions to common challenges with the incoming U.S. administration on the basis of the core values that define the United States and Europe as open democracies.