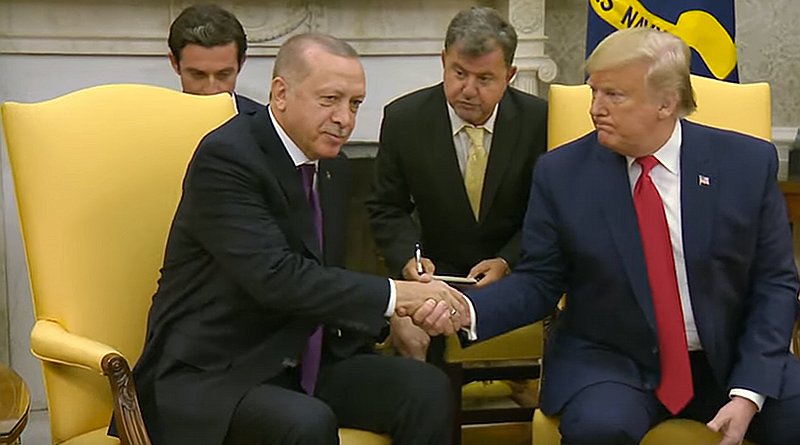 Turkish President Recep Tayyip Erdogan last week paid a “historic” visit to Washington — at least this is how it was portrayed in the Turkish media. The agenda was full of critical issues, ranging from the US imposing sanctions on Turkey because of its military operation in Syria to the adoption in the House of Representatives a resolution under which the US would recognize as genocide the events that took place against the Armenians during the First World War.

Before Erdogan left Ankara for Washington, a major train crash looked unavoidable. Many analysts offered suggestions on how to avoid it. However, none of the doomsday scenarios they predicted materialized.

While Donald Trump was hosting Erdogan in the White House, he made an unusual move by inviting some senators to join them. This was meant, firstly, to let the senators tell Erdogan exactly what they had in mind, thus avoiding the difficult task of Trump having to convey the intricate details of the senators’ message to Erdogan. Secondly, it demonstrated that the US president was under pressure because of the senators’ attitude toward Erdogan. And thirdly it gave Erdogan an opportunity to explain to the senators his policy on the Syrian crisis and the Kurdish issue.

Ahead of the visit, the senators leaked to the press the disturbing questions they were going to ask Erdogan. If this scenario was designed by Trump, it actually worked well. For instance, on the Armenian genocide issue, Sen. Lindsey Graham, after participating in the White House meeting, told senators that history should not be written by them and blocked the resolution. Furthermore, the senators were given an opportunity to prove to their constituencies that they have done what they could to corner Erdogan.

The Trump-Erdogan summit was first held in a “plus-one” format, with the participation of the two countries’ respective foreign ministers, plus interpreters, in addition to the presidents. This was followed by a lunch, with the full participation of both delegations.

Apparently the leaders were led to the conclusion that there was no need to get entangled in unnecessary debates on the endless list of controversial issues.

At the press conference held after the meetings, Trump made a lengthy introduction to express how he was a big fan of Erdogan. He emphasized mostly the positive aspects of Turkish-US relations, but without denying the presence of annoying controversies. He did not forget, for instance, to reiterate that the US had “a great relationship with the Kurds.” “We are with them now,” he continued, “we get along with them.” Then, remembering that this might hurt Erdogan, completed his statement by saying: “Many Kurds live currently in Turkey, and they are happy and they are taken care of.”

He made a special effort to encourage the reporters to ask “friendly” questions to Erdogan. “A friendly person from Turkey, friendly. Only friendly reporters. We like to see, there are not too many of them around,” he said. Actually, the Turkish reporters that were present were mainly the “friendly reporters” of pro-government media outlets.

One question to Erdogan — which was probably pre-arranged — gave him an opportunity to explain Turkey’s Kurdish policy. A self-confident Erdogan told the reporters that Turkey did not have any problem with the Kurds and that there were more than 50 parliamentarians of Kurdish origin in his party, the ruling Justice and Development Party (AKP). He added that his problem was with terrorists, irrespective of their ethnic origin, citizenship or religion.

Erdogan was also given a chance to explain what happened to the letter that Trump had sent to him last month. The letter was hardly compatible with the tradition of diplomatic correspondence between two heads of state. Before leaving Turkey, Erdogan had promised he would tell Trump he was dismayed by the contents of the letter. A Turkish reporter asked a question about it and Erdogan said he showed the letter to Trump and told him that he was dismayed, thus fulfilling his promise to the domestic audience.

All in all, the visit may not have solved any of the controversial issues, as they were brushed under the carpet to ease the gloomy atmosphere that prevailed in the two countries’ relations — the alternative was for these issues to become worse. The efforts to find solutions to the problems have been postponed to a time when the circumstances will be more propitious.
The parties have to be congratulated for having kept the harsh discussions behind closed doors and placing the emphasis on positive subjects.

Therefore, we may say it was all quiet on the Turkish-American front, as long as US sources do not leak to the media embarrassing details of the debates that may have taken place behind the scenes.

Home » All Quiet On The Turkish-American Front – OpEd