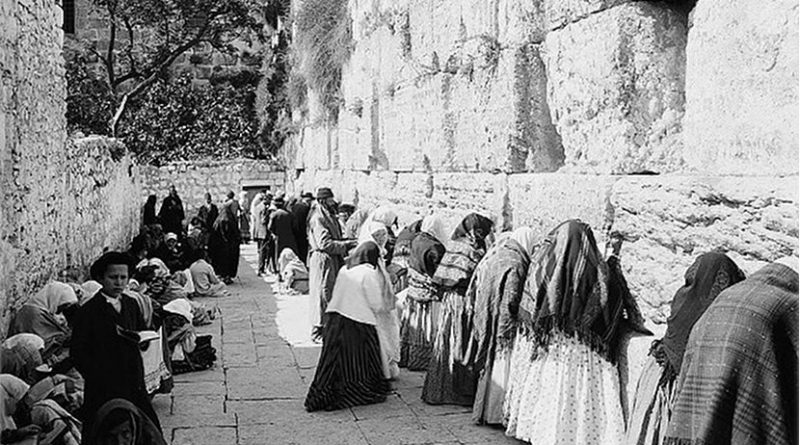 The sacredness of the Western Wall is a relatively recent phenomenon and an outgrowth of Sultan Suleiman I's (r.1520- 66) rebuilding activities in Jerusalem. The site was originally just a narrow alley that restricted its usage by the city's Jewish worshipers. Photo Credit: Wikipedia Commons.

As part of its proclamation recognizing Jerusalem as Israel’s capital, the Trump administration made a big deal of claiming that the statement didn’t define what the future borders of Israel or Palestine would or should be.  This offered the charade that the U.S. wasn’t refusing to recognize East Jerusalem as Palestine’s capital at some vague, undetermined future date; and that we would be open-minded about determining what Palestine’s future borders should be.

In point of fact, media reports have confirmed that the “deal” offered by the Saudis to Mahmoud Abbas when he was summoned to the Crown Prince was for Israel to retain pretty much all the settlements it now controls; while Palestine would consists of portions of Areas A and B.  This too is little different from current practice, since Israel controls security in almost the entire area and would essentially continue to do so under the purported U.S.-brokered deal.

In other words, the notion that the U.S. in recognizing Jerusalem as the national capital of Israel hasn’t predetermined an outcome is either a lie or a figment of someone’s imagination.

The article in Haaretz containing an interview with a “senior Trump official” (undoubtedly either Greenblatt or Kushner, possibly the former), in which he says he can’t imagine a future peace deal which wouldn’t designate the Kotel as part of Israel, goes a long way to confirming what I wrote above:

The official said in a press briefing on Pence’s visit that while the final boundaries of sovereignty in Jerusalem should be decided in direct Israeli-Palestinian negotiations, “We note that we cannot imagine Israel would sign a peace agreement that didn’t include the Western Wall.”

I suppose there might be some way you could designate just the Kotel itself and the surrounding plaza as Israeli territory much like an embassy building is considered sovereign territory of the nation which owns it.  But that would mean that Israelis would have access to the Kotel under the sufferance of the Palestinians, who would control the rest of east Jerusalem.  I strongly doubt Israel would accept this situation.

Another problem related to this is that those who’ve revealed details about the Trump peace proposal have said Jerusalem would not be part of it in this phase.  That means that the Palestinians would agree to accept a country that was little more than a bantustan, with Israel retaining security control over virtually the entirety of Palestine, while the new state would not have its capital in Jerusalem.

So when, if ever, would the Palestinians get their capital?  At some undetermined time in the future, depending on their behaving well and dropping to their knees and thanking ‘massas’ Bibi and Trump for their goodness and kindness?  I can see this going over exceedingly well with the Palestinian street.

This interview shows, once again, that Trump hasn’t a clue about how to conduct a delicate peace deliberation without alienating a key player in the process.  He’s been called out here, and no Palestinian will touch anything he’s offering with a ten-foot pole.  And he has no one to blame but himself and his own big mouth.

OK.  So you have the Iranians getting nuclear plants, technology, and uranium enrichment expertise from the Russians.  As a result, some fear the Iranians may be using these as components of a nuclear program to develop nuclear weapons.  You have these same people warning that if Iran gets nuclear weapons that the Saudis would be next to follow suit thus commencing an arms race throughout the region.

Knowing all these things, and if you believed that they were likely, would you then offer to sell the Saudis advanced nuclear technology and build nuclear power plants for them?  Trump apparently would.  Keep in mind, that part of this process would involve training the Saudis to enrich uranium to power the reactors, exactly what the Russians have enabled the Iranians to do.  Further, there is little stopping the Saudis, once they can enrich the uranium to the necessary 5% to power reactors, from enriching it to the 90% necessary to create nuclear warheads.

In other words, the Trump administration is promoting nuclear proliferation in the Middle East.  It wants essentially to start the Saudis on the path to becoming a nuclear-capable state in order to counter Iran’s purported rush to become a nuclear power.

We’ve already done this with the Israelis.  Without our support–and the theft by Israeli agents, including Arnon Milchan, of key nuclear technology and materials from our plants–the Israelis themselves could never have developed nuclear weapons (at least not under the expedited timetable which offered them this capability as early as 1967).

What Trump is proposing is not just a terrible idea, it will exponentially increase the possibility of a nuclear war in the Middle East.  We already have a nuclear-armed Israel.  If the Saudis get WMD, then it will force Iran to do the same.  At that point, you will have three nuclear-capable states in the region with another, Pakistan, very close by.  Is this really a desirable development in a region prone to be a powder keg even without the inclusion of WMD in the mix?

We all know that the Trump regime is full of bad ideas.  And it isn’t afraid of pummeling the American people and the world into submission by not only proposing them, but implementing them.  So it comes as no surprise that such a cockamamie idea would be advanced for the Middle East.  My only hope is that there will be some members of Congress who will recognize this for the awful idea it is and put a stop to it.

This article was published at Tikum Olam

Home » Trump: Kotel Must Be Part Of Israel In Peace Deal – OpEd