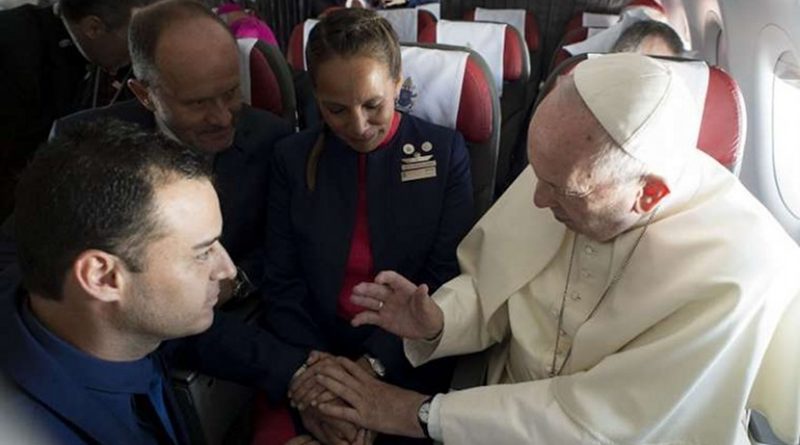 In his five years in office, Pope Francis has gained a reputation for embracing spontaneity. Today, he did it again with another papal first: witnessing the marriage of two flight attendants on board his flight from Santiago to Iquique.

According to journalists traveling with the Pope, the couple – Paula Podesta and Carlos Ciuffardi – went to the Pope during the Jan. 18 flight to ask for his blessing.

The couple told Francis they had been civilly married, but said they had not been able to get married in the Church because their parish was destroyed in the massive 8.8 earthquake that rocked Santiago in 2010.

In response, the Pope offered to convalidate their marriage on the spot. Ignacio Cueto, owner of the airline company, LATAM, was a witness in the ceremony.

According to Ciuffardi, who spoke briefly with journalists after the ceremony, the Pope asked the couple if they were married yet, and when they explained why they hadn’t been married in the Church, he said “do you want to get married?”

The Pope, Ciuffardi said, asked them “Are you sure, absolutely sure?” They said yes, gave the Pope thier rings and asked Cueto if he would be a witness. The Pope then blessed the rings, placed their hands together, offered some brief reflections and pronounced them man and wife.

According to Ciuffardi, Francis told them what happened “was historic,” because “never has a Pope married a couple on a plane.”

Referring to the rings, Francis jested that they shouldn’t be too tight, because “they would be a torture,” nor too loose, because they might lose them.

Since they didn’t have an official marriage certificate to sign, Pope Francis asked the cardinals with him to draft one, so they grabbed a piece of blank copy paper and each signed their names and what role they played in the ceremony. One of the cardinals also signed as a witness.

The Pope gave the couple two rosaries, Podesta received a white rosary and Ciuffardi a black one.

The couple – who have two children, Rafaela, 6, and Isabela, 3 – said they will be traveling with the Pope to Iquique, and from there will take a different flight to another destination, and will celebrate after.

“It was something historic, really. Very exciting. What he told us was very important: he told us ‘this is the sacrament that the world needs, the sacrament of marriage. Hopefully, this will motivate couples around the world to get married’,” Ciuffardi said.