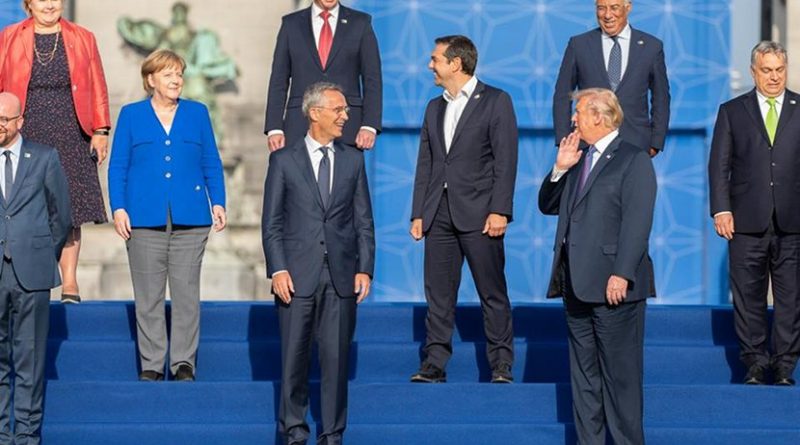 The New York Times recently reported that ahead of the NATO Summit last summer, President Donald Trump was seriously questioning why the US was in the organization. For those who have been following his rhetoric since the early days of his presidential campaign, news that he was questioning the value of NATO is no big surprise.

When it comes to the alliance, there are two Donald Trumps.

“Campaigning” Trump uses NATO in his stump speech to beat up on allies and give the impression that Americans are getting duped by the alliance because many of its members are not pulling their weight. Meanwhile, “presidential” Trump stated during a speech at the Pentagon as recently as this week: “We’re going to be with NATO 100 percent.”

There are four very good reasons why it is in America’s interests to stay engaged in European security and remain supportive of NATO. The first reason is normative. Through two world wars and the Cold War, the American family and taxpayer have sacrificed greatly to keep Europe free and democratic. Some of America’s oldest and closest allies are found in Europe today. America shares with these countries the same beliefs and ideas in economic freedom, the rule of law, freedom of the press and democracy. Therefore, it is in America’s interests that it aligns itself with a group of like-minded countries such as those in NATO.

The second reason is about economics. Europe and the US are each other’s No. 1 trading partner. They are each other’s No. 1 source of foreign direct investment. Combined, they account for almost half of the world’s gross domestic product. Whether it is BMW in South Carolina or Ford in Germany, they are the source of millions of jobs for each other. This economic relationship is only made possible by the stability and security that NATO, and America’s role in the alliance, have brought to Europe since World War II.

The third reason has very little to do with Europe itself, but instead the region around it. From North Africa to the Levant, the Caucasus, through Russia and into the Arctic, Europe is surrounded by a zone of unpredictability and instability. Passing through this area are some of the world’s most important shipping lanes, rail links, fiber-optic cables, oil and gas pipelines, and other trade routes. It is in America’s interests to have military forces near this region in order to give policymakers options in the event of a crisis. The large Cold War garrisons in Europe of the 20th century are now the forward operating bases of the 21st century. It is true that a large number of US forces in Europe also provide security to Europeans, but this is a consequence of, not the reason for, America’s military presence on the continent.

Finally, NATO countries have sacrificed greatly for the US. Article 5, which is NATO’s mutual security clause, has only been invoked once, and that was after the Sept. 11 attacks. Since then, tens of thousands of European soldiers, serving under the NATO flag, have fought in Afghanistan. More than 1,000 have made the ultimate sacrifice. Thousands more have been wounded.

Therefore, Americans should not ignore how important Europeans have been in supporting the US over the years. As former US Defense Secretary James Mattis said during his Senate confirmation hearing in 2017: “History is clear. Nations with strong allies thrive, and those without them wither.”

The importance of NATO and continued engagement with Europe is vital for America’s larger strategic interests. This is why Trump needs to make crystal clear that his administration will unconditionally support the alliance. Merely questioning America’s commitment to it is enough to tempt Moscow. Any equivocation or ambiguity can open the door for Russian aggression.

Since its creation in 1949, NATO has done more to promote democracy, peace and security in Europe than any other multilateral organization. A stable, secure Europe is in America’s interests. Now is not the time for the US to turn its back on an alliance that has been so good to it.

*Luke Coffey is director of the Douglas and Sarah Allison Center for Foreign Policy at the Heritage Foundation. Twitter: @LukeDCoffeyherherit

Home » A Stable, Secure Europe Is In America’s Interests – OpEd