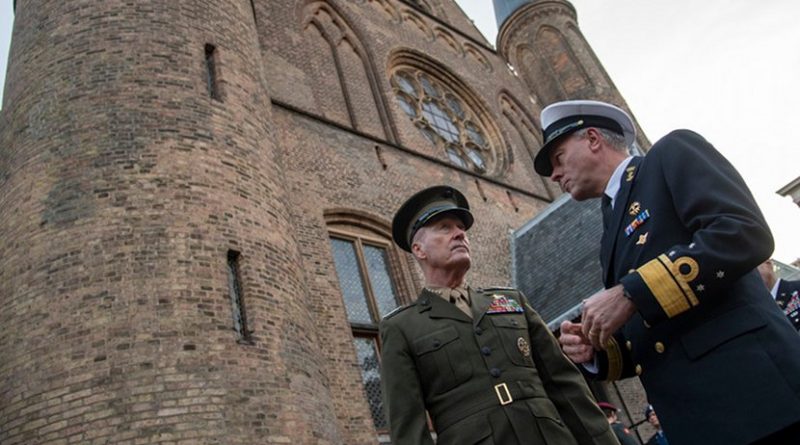 Allies and partners will become more crucial to peace and security in the years ahead, the chairman of the Joint Chiefs of Staff said during a ceremony in which he received the Order of Orange-Nassau.

The Netherlands is a charter member of the North Atlantic Treaty Organization, and Dunford and Bauer participated in the alliance’s Military Committee meeting earlier this week. His visit to the Netherlands was to discuss the state of the already close bilateral relationship.

“I view the strength of the United States as being the network of allies and partners that we have,” Dunford said. “I am very humble about our ability to deal with any of the challenges we have in the world [alone]. But I am actually very confident of our ability to deal with the challenges we have … because of the network of allies and partners.”

Dutch leaders agreed. “As an alliance we are witnessing a change in the security situation with a threat landscape that is becoming more complex, more uncertain,” Bijleveld said. She added that European allies need to do more for security, and that includes investing in military and security capabilities.

The U.S.-Dutch relationship is an old one as far as Americans are concerned — Holland became the first nation to recognize and salute the U.S. flag when the USS Andrew Doria sailed into Saint Eustatius Harbor in the Caribbean in 1776.

During World War II, American ships sailed into harm’s way alongside Dutch vessels in the Battle of the Java Sea in 1942, and the 82nd and 101st Airborne Divisions dropped on the Dutch cities of Eindhoven and Nijmegen as part of Operation Market Garden in 1944.

U.S. service members have been assigned to bases in the nation since NATO formed in 1949, and American service members work alongside their Dutch comrades in combat zones around the world today.

Dunford’s career is an example of the close cooperation between the two nations. He spoke of going through a U.S. Marine Corps course in 1984 with two Dutch Marines. He spoke of commanding a U.S. company of Marines that were part of a Dutch-led task force in the Mediterranean. And he spoke of working alongside Dutch military and diplomatic personnel in Iraq and Afghanistan.

The U.S.-Dutch relationship covers the gamut, including economics, politics and culture. “But I do think our military-to-military relationship has been a foundational element of that greater relationship,” the chairman said.

Relationships will become more important, Dunford said. “When I look at the current security environment, I can’t think of any challenges that we are dealing with that aren’t transregional — that aren’t cutting across multiple geographic areas,” he said during a short interview with Dutch reporters after the ceremony. “It’s going to take a strong network of allies and partners that have common values and a common understanding of the challenges to work together to solve those problems.”

Dunford said the United States is committed to working with European allies. He said Europeans to look at the U.S. contribution to NATO, at the U.S. investments in NATO and at the U.S. participation in NATO military operations and exercises. If they do that “I hope the people understand fully our commitment to NATO,” he said.

“The discussion has been about burden-sharing,” the chairman said, “not about commitment to the alliance. It’s a discussion that all 29 members of the alliance are making their fair share of the continuation for the common challengers we face. All members need to ensure they are doing what is needed to face the problems of collective security.”

The Dutch see NATO remaining the cornerstone of their security and safety, Bauer said. “The good news is amongst the colleagues — there is a very strong commitment. Politically there is no change that we are drifting apart from one another,” he said during an interview.

NATO is an alliance based on a correct combination of policies and security, Bauer said.

“There are a lot of parts of the world that would love to have such an alliance,” the admiral said. “We are working together, and we are celebrating 70 years of working together. For 70 years, we have set standards in all domains so that we can work together, so we can fight together and that is of great value. Even in coalition operations, if NATO partners meet one another they do not have to spend much time to figure out how to work effectively with one another. We should cherish that.”