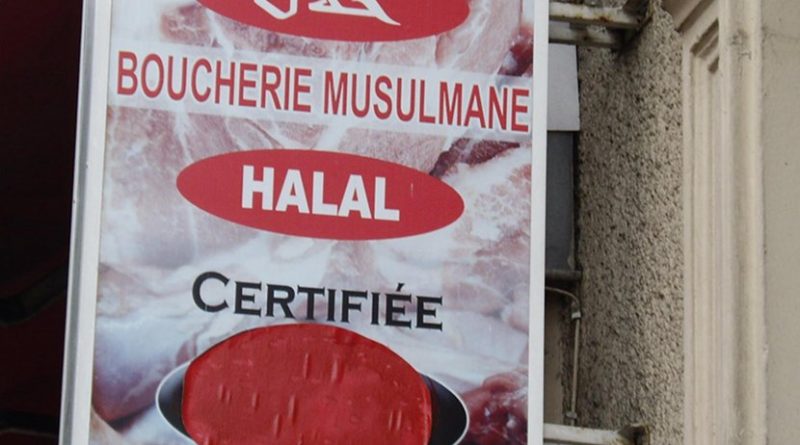 Shop sign in French and Arabic for a halal butcher's shop. Photo by Mu, Wikimedia Commons.

Indonesia’s new halal certification law will be implemented by the end of 2019. What are the implications of the upcoming halal law on the country’s political economy and on Indonesia’s ambition to be a global halal hub?

By Made Ayu Mariska and Jefferson Ng*

There are currently three developing issues related to the rise of Islamic awareness of public goods in Indonesia. These are the laws on Islamic boarding schools (Undang Undang or UU Pesantren); marriages (UU Perkawinan); and halal certification (UU Sertfikasi Halal). Five years since the passing of the Halal Product Assurance Law (Law No. 33/2014), Indonesia will be implementing compulsory halal certification from 17 October 2019.

Non-compliance will result in administrative penalties after a three-year grace period. Compulsory halal labels will impact on the competitiveness of products imported from abroad as well as Indonesian products exported to Muslim majority countries. Consumer products worth S$380 billion in the F&B, cosmetics, and pharmaceuticals industries will be affected by the legalisation of this new law.

The Jokowi administration is attempting to improve process efficiency and reduce bottlenecks caused by too many businesses scrambling for certification. But businesses are likely to face significant short-to-medium term impacts. Implementation is likely to raise costs and administrative roadblocks and may prevent businesses from obtaining certification by 2022, when the grace period ends.

Despite business concerns, strong political will remains, regardless of who wins this April’s presidential election – Joko Widodo and his running mate Maruf Amin, or their challengers, Prabowo Subianto and his running mate, Sandiaga Uno. Halal law implementation is popular with a significant number of Indonesian Muslims and could be critical for Indonesia’s ambition to become a global halal hub.

In Indonesia, only about 20% of products permissible for Muslims to consume are currently labelled halal. The Majelis Ulama Indonesia (MUI), the highest Islamic scholars’ institution in the country, administers a voluntary halal certification scheme. This role will be taken over in October 2019 by a new state-owned entity.

A new halal certification system will be introduced and administered by Badan Penanggulangan Jaminan Produk Halal or the Halal Product Assurance Agency (BPJPH), which will involve MUI and the Halal Audit Institutions (LPH) come October 2019. In the new arrangement:

• The BPJPH will serve as the point of contact for companies to be halal-certified and the BPJPH will supervise/coordinate with LPH and MUI;

• LPHs are private or government entities (eg. state universities) accredited by the BPJPH to conduct inspections and carry out halal audits. If products meet halal standards, BPJPH will submit the results to MUI; and

• MUI will examine LPH’s audits and assess the halal-certification worthiness of products. If the product passes MUI’s examination, BPJPH will issue the halal certification.

More Indonesian Muslims are expressing their piety and adherence to Islamic values in their lifestyles and consumption patterns. A bandwagon effect is underway as more companies respond to growing demand for halal products, most memorably when Sharp Electronic Indonesia introduced a halal-certified refrigerator in mid-2018.

Businesses are likely to be concerned about additional resources (time, money, manpower) needed to comply with the new halal law. Current trends indicate a significant risk that some businesses could fail to obtain halal certification by October 2022, due to a mismatch between institutional capacity and the regulations required.

Non-compliance could mean administrative penalties or reduced product competitiveness as Indonesians opt for halal certified alternatives. The costs of compliance are also likely to be burdensome for smaller firms — the Employer’s Association of Indonesia (Apindo) reckons that each halal certificate will cost about 15 million rupiah on average (S$1400).

BPJPH is also severely understaffed while an estimated 1.5 million F&B companies require certification. This means delays as halal screening is a time-consuming process. For reference, MUI processes only about 6,000 certification requests annually. For products to be in line with Islamic principles, the entire production line (inputs, equipment, processing, storage, package, distribution) needs to be scrutinised, including lab-testing for alcohol residue and pork.

The process of navigating certification from BPJPH to MUI is also an additional complexity for businesses. To streamline the process, proposed regulations indicate that products certified by overseas halal agencies only need to be registered at BPJPH before circulation.

This is good news for importers, but domestic producers that fail to get certification by 2022 could become less competitive than imports.

Nonetheless, the convergence of political and economic interests is translating into strong political will to implement the new halal law. Indeed, the vice-presidential candidate and running mate of Jokowi, Maruf Amin, who is also the chairman of MUI, recently re-affirmed support for compulsory halal certification in 2019 at an international halal expo, asserting that he will push for the law’s implementation.

In the context of the upcoming presidential race in April, the implementation of the halal law on consumer products and related services will burnish the Islamic credentials of the Jokowi camp. According to a recent poll by Poltracking Indonesia, 58.5% of voters will consider the religious credentials of potential presidential and vice-presidential candidates.

Jokowi’s choice of Maruf Amin as his VP candidate is a pragmatic realisation of the political reality that candidates cannot afford to ignore their Islamic credentials. If Prabowo Subianto wins the presidential election, his governing coalition will be built on a narrower base compared to Jokowi as Prabowo’s coalition comprises a smaller number of allied parties.

Backpedalling on halal law implementation will cost him political capital which he cannot afford. Thus, political and economic indicators suggest that Indonesia will stick to the timetable for implementation in October 2019.

All factors considered, it is unlikely that Indonesia’s new halal law will be delayed in its roll-out. If BPJPH remains ill-prepared to execute its mandate even if proposed government regulations are simplified and made more efficient, businesses need to adapt to the new political and economic reality. But BPJPH must live up to its role as the effective regulator and enabler of the new halal law.

*Made Ayu Mariska is a Research Associate and Jefferson Ng a Graduate Research Assistant with the Indonesia Programme in the S. Rajaratnam School of International Studies (RSIS), Nanyang Technological University (NTU), Singapore.