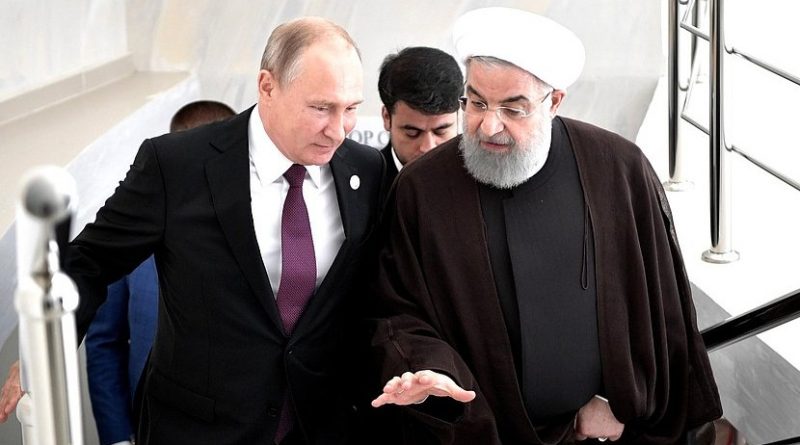 Syria is symbol of Russo-Iranian cooperation and there are numerous facts to prove it. However, there are also other theaters where Moscow and Teheran have successfully cooperated for years. Their deep-rooted partnership in the South Caucasus and the energy-rich Caspian Sea is a good example of this growing trend. Altogether, this fits into the “geopolitical chaos” across Eurasia where we see Russia, Iran and other regional powers working more closely to confront US dominance.

Iran and Russia have historically been wary of each other’s geopolitical ambitions. Numerous wars in the 19th century over the domination in the South Caucasus and the Russian influence in northern Iran in the 20th century made deep cooperation between the two powers almost unthinkable. However, the developments in Syria since 2011 and the US pressure on Moscow and Teheran have made partnership a much more possible scenario.

In Syria, both Russia and Iran are interested in stopping western (primarily American) influence gaining much of a foothold in the country. However, while this deep cooperation has become a symbol of the aligning Moscow-Teheran geopolitics, it overshadows other trends in Iranian-Russian relations, namely a deep partnership in the South Caucasus and the Caspian Sea.

The focal point of cooperation is the nascent North-South transit corridor between Iran and Russia, which passes through Azerbaijan. The three countries are already somewhat connected via rail links and there is the notion that Russia’s Baltic ports and the Persian Gulf could one day enjoy efficient connections. Tehran and Moscow see Azerbaijan as a vital component in advancing North-South trade and energy corridors in the South Caucasus. Both countries work together to block Western-led infrastructure projects. Such corridors rival the West-East ones promoted by Western countries and perhaps also the East-West Belt and Road initiative backed by China. Another common interest will be to avoid any foreign military presence in the region, particularly in Georgia.

Another area of Iranian involvement could be the Nagorno-Karabakh conflict. There were attempts by Tehran to mediate the conflict in the early 1990s, but it largely failed, and Russia, the dominant power in the conflict resolution process, would likely be much opposed to any Iranian meddling which might diminish Moscow’s role.

From the Iranian perspective, the growing military cooperation between Turkey, Georgia and Azerbaijan could potentially create a problem. The same problem could be seen in the expansion of NATO, primarily in Georgia. Russian-thinking could well align with that of the Iranians as both fear Western military encroachment on their spheres of influence. Both also loath Turkish influence in the region. Here, Russians are more predominant than the Turks in terms of military presence in the region. However, in trade and investments, Turkey is unquestionably at the forefront. True, there have been positive developments in Azerbaijan-Iran relations of late, but still, Ankara enjoys good relations with Baku and supports it in the simmering Nagorno-Karabakh dispute.

While the lifting of sanctions against Iran in 2015 somehow helped the country enjoy a freer hand in asserting itself in the South Caucasus economically and politically, the country has nevertheless continued to face substantial challenges from Russia and Turkey. Armenia-Russia relations are too ingrained in mutual military and economic cooperation for Iran to manage to insert itself while, elsewhere, Turkish economic and political influence still overshadows Iran’s ambitions and even in the Nagorno-Karabakh conflict Russia will use all its tools to block Tehran’s greater involvement.

Further east from the South Caucasus the Russians and the Iranians are cooperating in the Caspian region too. The Caspian Sea was a place of geopolitical contentions among five littoral states. In 2018, the Convention agreed upon by all the Caspian states clarified the right of the five littoral countries to lay underwater pipelines (according to Article 14), subject only to the agreement of those states whose sectors the pipelines or cables pass through. Although this was agreed upon, laying underwater pipelines goes against Russian and Iranian geopolitical interests as it will allow Central Asian states (primarily Turkmenistan) to export large resources of gas to Europe. Both Iran and Russia intend to do this themselves, although the latter has clearly had the upper hand since the end of the Soviet Union.

There is also an interesting international context with regards the strengthening of the Iranian-Russian cooperation generally, and in particular in the South Caucasus and the Caspian Sea. Washington re-imposed sanctions on Teheran in 2018, further underpinning the Russian and Iranian view that the US is against any rise of regional powers across the Eurasian landmass. Both are experiencing a sanctions regime from Washington and there is a shared understanding in Moscow and Teheran that the US is a geopolitical enemy.

This fits into the geopolitical “chaos,” or, as some call it, the strategic realignment of many power brokers in the Eurasian landmass. However, the Eurasian landmass is also experiencing deep geopolitical changes. On the surface, one might say it is easier for the US to manage a divided Eurasia now that there are numerous regional powers competing with one other rather than the monolith that characterized the more stable era of the Cold War.

However, the modern-day Eurasia is more chaotic, and this unpredictability represents a marked break with what the West had to cope with in previous decades. In the more predictable Cold War era, geopolitics was important, but it was hidden under democratic and idealistic premises.

In modern Eurasia, though, there is a clear shift towards a new, more untenable world order. Russian and Iranian cooperation not only in Syria, considered by many as an alliance of convenience, is in fact only one element of much bigger cooperation between the two, spanning other regions of the Eurasian landmass.

This article appeared at Georgia Today

One thought on “Iran-Russia Cooperation Grows Beyond Syria – OpEd”