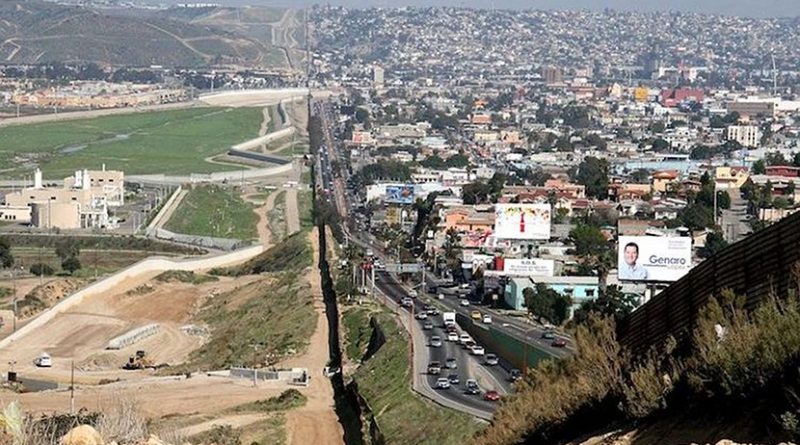 A small fence separates densely-populated Tijuana, Mexico, right, from the United States in the Border Patrol's San Diego Sector. Construction is underway to extend a secondary fence over the top of this hill and eventually to the Pacific Ocean. Source: Wikimedia Commons.

President Trump’s proclamation of a state of national emergency on the southern U.S. border is a frontal assault on constitutional norms and democratic rights in America. It is the first time in American history that a president has sought to usurp the constitutional prerogative of Congress to decide how public funds are to be spent.

The actual text of the proclamation, released by the White House on February 15 afternoon, confirms that Trump is seeking to accomplish the building of a wall along the U.S.-Mexico border primarily through the U.S. military and using the vast resources of the Pentagon.

After describing the situation at the border as one that “threatens core national security interests” because it “is a major entry point for criminals, gang members, and illicit narcotics,” the proclamation states: “Because of the gravity of the current emergency situation, it is necessary for the Armed Forces to provide additional support to address the crisis.”

The proclamation invokes section 12302 of title 10, United States Code, part of a 1953 law that authorizes the secretary of defense to mobilize up to one million military reservists for a period of up to 24 months. This section has been used to mobilize the reserves for deployment to Iraq and Afghanistan and was invoked by President George W. Bush after the 9/11 attacks. In other words, Trump is seeking to treat the U.S.-Mexico border as a major military battlefield, with immigrants and refugees cast as “invaders” threatening the United States.

Trump also invokes Section 2808 of title 10, which authorizes the Pentagon to carry out construction activities in support of military operations. This has previously been understood to refer to the building of barracks, fortifications, airstrips, roads, prisoner-of-war camps and other facilities required by the military during active combat operations. The wall along the U.S.-Mexico border is to be treated as a similar military necessity.

The actual directive from Trump to the Pentagon chief, in this case acting Secretary of Defense Patrick Shanahan, authorizes him to “order as many units or members of the Ready Reserve to active duty as the Secretary … determines to be appropriate.” The secretaries of the departments of Defense, Interior, and Homeland Security are additionally ordered to “take all appropriate actions … to use or support the use of the authorities herein invoked, including, if necessary, the transfer and acceptance of jurisdiction over border lands.”

This is a broad and sweeping grant of authority to the Pentagon for what amounts to the complete militarization of the U.S.-Mexico border.

The declaration of a national emergency allows the president to invoke a total of 136 distinct statutory powers, only 13 of which require further congressional action, meaning that 123 powers are available to the executive branch without any congressional input. These powers range from suspending all laws regulating chemical and biological weapons to allowing the drafting of retired military officers for emergency service.

This order is in flagrant violation of the Posse Comitatus Act, which bars the U.S. military from engaging in law enforcement operations within the borders of the United States. To disguise this illegality, Trump’s order describes the military as operating “to assist and support the activities of the Secretary of Homeland Security at the southern border.”

Most fundamentally, Trump’s order is in direct defiance of the U.S. Constitution. Article I, Section 9, Clause 7 of the Constitution reads, in part: “No Money shall be drawn from the Treasury, but in Consequence of Appropriations made by Law …” This language has invariably been understood to mean that the legislature possesses the “power of the purse,” and that the executive branch (which includes the Treasury) may spend money only as authorized by Congress.

As recently as 2014, congressional Republicans sued the Obama administration, alleging that funds were being paid out under the Obamacare program to insurance companies in the form of “cost-sharing reduction payments” that had not been appropriated by Congress. Although the Congress, at the time under Democratic control, had clearly intended to authorize the payments, the actual language drafted for the bill failed to include this provision. The federal courts upheld the Republican lawsuit and struck down the payments.

A House Republican leader, Representative Greg Walden of Oregon, declared at the time, “The principle there is separation of powers, constitutional authorities that Congress appropriates the money.” Today, most congressional Republicans are expected to support Trump’s action in flagrant defiance of the separation of powers.

“The President is not above the law,” Pelosi and Schumer added. “The Congress cannot let the President shred the Constitution.”

But that is precisely what is about to happen. The House of Representatives may pass a resolution of disapproval, which then must be voted on by the Senate within 18 days. Even if a half dozen Republican senators support the resolution, Trump will then veto it, with little likelihood of a two-thirds majority in either house to override the veto.

Neither Pelosi nor Schumer, nor any other leading congressional Democrat, has suggested that Trump’s action is an impeachable offense, or that the president should be removed from office for a flagrant violation of his sworn oath to uphold and defend the U.S. Constitution. Instead, they have advocated lawsuits, leading ultimately to a decision by the U.S. Supreme Court, with its five-member ultra-right majority, including two justices nominated by Trump himself.

Trump boasted of his likely triumph at the Supreme Court during his rambling press conference on February 15 at which he announced that he had signed the declaration of national emergency. He expressed contempt for the opponents of the border wall, who he predicted would win favorable decisions at the district and appeals courts, only to be overturned by the Supreme Court, as was the case in the litigation over his ban on Muslim travelers entering the United States.

The decision by the Democrats to appropriate $1.375 billion for border wall renovation and construction, incorporated into the overall federal funding bill Trump has agreed to sign into law, strengthens Trump’s legal position. His attorneys will argue that Congress has already agreed to build the wall, and the only disagreement is over how fast to do so, and that the courts must defer to the judgment of the “commander-in-chief” on an issue of “national security.”

Trump’s press conference was largely devoted to fascistic ranting against immigrants and asylum seekers, portraying them as a hostile invasion force bringing drugs, crime and terrorism into the United States. In a particularly ominous note, he hailed the anti-drug policies of the Chinese Stalinist dictatorship, which regularly executes prisoners convicted of drug trafficking, suggesting that such barbaric methods had allowed China to “solve” its drug problem. Trump’s emergency declaration is a step towards just such a “final solution” in the realm of immigration.

This is language that has never been heard before from an American president. It comes close to that of another Trump favorite, Philippine President Duterte, whose police death squads have slaughtered thousands of residents of working class slums, claiming they are “drug dealers.”

When such comments are made in the Rose Garden, there should be no mistake: The United States is teetering on the brink of dictatorship. There is a colossal disparity between the seriousness and urgency of this danger and the complacency of the response by the Democrats and the media.

The Democrats, who have worked relentlessly to promote the military and intelligence agencies in their factional conflict with Trump, are far more concerned about preventing any mobilization of the working class against Trump’s authoritarian measures than they are concerned about their tactical differences with the White House.

What is happening in the United States is part of an international process. Under the impact of the global economic crisis of capitalism, and the increasingly violent and reckless clashes between the major powers—spearheaded by the United States—democratic forms of rule are breaking down. This is accelerated, above all, by the growing social tensions within every capitalist country, as economic and social inequality reaches unheard-of proportions.

Under these conditions, working people cannot look to any section of the capitalist ruling elite and its political establishment—including the Democratic Party in the United States—to defend democratic rights. This task requires the building of an independent political movement of the working class, expressed already, in an embryonic form, in the expanding wave of strike struggles around the world. The Socialist Equality Party and the WSWS fight to develop this movement of working people and make it a politically conscious struggle for a socialist and internationalist program.

Note: Patrick Martin is a Canadian journalist who since 2008 has been the Jerusalem-based Middle East bureau chief for The Globe and Mail, a national Canadian newspaper. He was the paper’s Middle East correspondent during much of the 1980s, covering the 1982 Lebanon war and other events. This article first appeared on 16 February on wswd.org