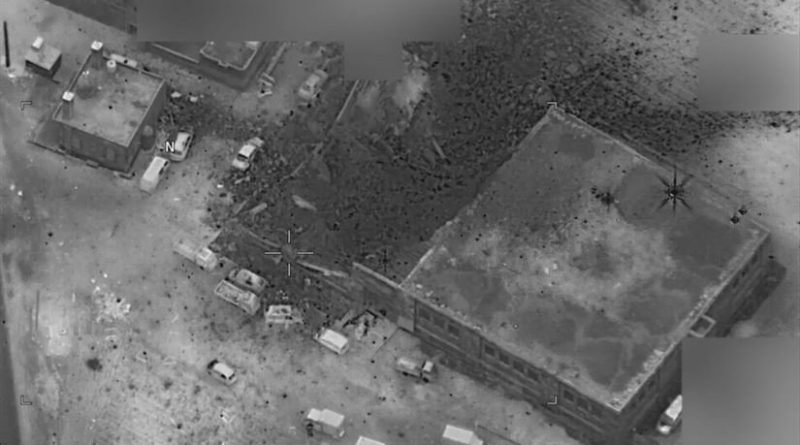 US Defense Department officials released this aerial photograph taken after a March 16, 2017, U.S. strike in Jinah, Syria. Military officials believe dozens of al-Qaida terrorist leaders were killed in the strike. The mosque in the left edge of the photo was not targeted, Pentagon spokesman Navy Capt. Jeff Davis told reporters at the Pentagon on March 17. DoD photo

Military officials believe dozens of core al-Qaida leaders were killed in a U.S. strike in Jinah, Syria, on Thursday, according to a Pentagon spokesman.

Speaking to reporters and in a later written statement, Navy Capt. Jeff Davis, the director of defense press operations, emphasized that a mosque in the area was not targeted. He released a post-strike aerial photograph showing the mosque adjacent to a destroyed building.

“I wanted to draw your attention to it, because I think there are a lot of reports suggesting that we had targeted a mosque,” he said. “We did not. Of course, you know we never would.”

The strike, conducted by manned and unmanned aircraft, occurred around 7 p.m. local time, Davis said, about 17 miles southwest of Aleppo. It was, he said.

“We struck a meeting of senior al-Qaida terrorists — some of these were likely high-value individuals,” Davis said. “We’re currently assessing that.”

Area Has Been al-Qaida Safe Haven

The area has been a significant safe haven for al-Qaida since it re-established a Shura Council in Syria last year, Davis said, adding that extensive surveillance took place before the strike.

“We do not currently assess there were any civilian casualties,” he said. “As always, you know we take extraordinary measures to mitigate the loss of civilian life in our operations.”

In other developments in Syria, Davis noted the Syrian Arab Coalition recently made territorial gains of about four square miles against heavy enemy resistance east of Raqqa. In northern Syria, around Manbij, the situation is “business as usual,” he said. “We continue to have some U.S. forces that are visibly positioned west of the city, inside the [forward line of troops],” he added. “But we have seen a lot of the Turkish-supported opposition who were there before start to back off, and there seems to be growing respect for that [forward line of troops],” he said.

In Iraq, Davis said, the battle for western Mosul is now in its 27th day. Iraqi security forces continue to make gains and defend their ground against fierce enemy resistance, he said.

The Iraqi forces are nearing a bridge, commonly known as the “Iron Bridge,” in the center of the city, Davis said. “They are just about at that bridge, they don’t yet control it,” he added. “They’re into the densest part of the city here.”

Since the start of the west Mosul offensive, Iraqi forces have gained more than 160 square miles of territory, Davis told reporters. The most recent gain, though less than half of a square mile, is “pretty significant,” he said, considering the city’s dense urban terrain.