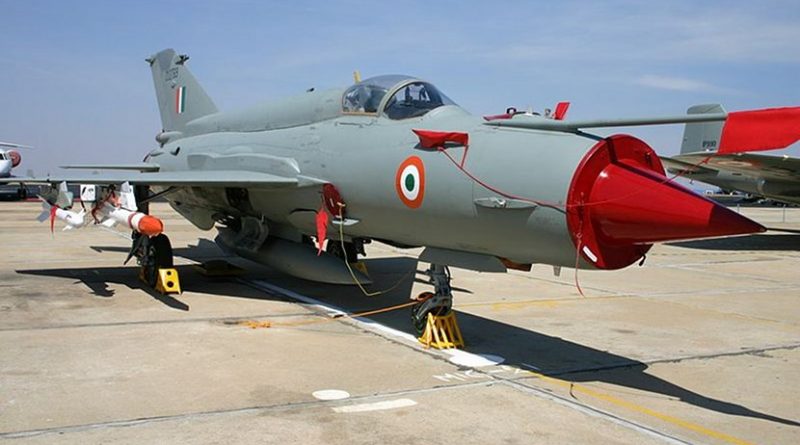 “If intense warfare broke out tomorrow, India could supply its troops with only 10 days of ammunition, according to government estimates. And 68 per cent of the army’s equipment is so old, it is officially considered vintage”. This is what was stated in a recent report published in New York Times about India’s military equipment.

Mikoyan-Gurevich-21 or MiG 21 was India’s first supersonic jet fighter aircraft manufactured in the Soviet Union in 1955. It is considered a second-generation jet fighter, which was first inducted in the IAF in 1963. MiG 21 once thought to be the backbone of Indian Air Force, playing a stellar role in the 1971 war against Pakistan.

It was also used in the skirmishes which broke out between Pakistan and India in 1999 during the Kargil War, where one IAF MiG 21 was shot down by ground fire. The IAF was forced to continue using this outdated warhorse mainly because of the delays at the part of Indian Defence Ministry regarding which their own senior naval official has claimed is incapable for even asking for the batteries for their submarines and secondly because of the poor and defunct technology of the Hindustan Aeronautics Ltd, eventually leading to numerous accidents.

Moreover, according to various reports and the answers given by various former defence ministers to the parliament MiG 21 were among the biggest casualties with more than 177 peace time air crashes so far. However, almost after every accident a committee was for formulated which stated these aircrafts to be outdated based on a design of 1950s.

Since its induction or more precisely since 1970s more than 200 pilots have been killed in MiG 21 accidents, which also resulted in the deaths of 40 civilians and also earning a name “Flying Coffin” or “Widow Maker”.

Whereas IAF officially claims that pilot error were the main cause behind accidents, internal reports conclude otherwise stating technical defects and engine flameouts to be the cause behind the crashes further strengthening the speculation that India’s MiG fleet may have certainly outlived its service life.

Notwithstanding, in summer of 2013 within two months, two incidents of MiG 21 jet crash took place and that too both the jets crashed whilst attempting to land at the Uttarlai Air Base at the Bamer district of Rajasthan, and the height of incongruity was that the crash had been attributed again to pilot error and later an inquiry was commissioned.

However, the thing to mention here is that soon after the incident, Wing Commander Sangeet Singh Kaila, a serving officer from the IAf, who himself was a MiG 21 crash survivor petitioned the High court for scrapping the entire fleet of the MiG 21 because of their being vintage and other technical defects. He was involved in a crash during flight exercise in 2005.

The court later gave the verdict in his favor where he has alleged in his petition that poor maintenance work executed by the Hindustan Aeronautics Limited, which manufactured all the domestically made MIG jets, had contributed to the failure of his aircraft.

The Indian Air Force has inducted more than 1,200 MIG variants in its fleet since 1963, when it was first used by the military. Currently, at least 252 MIG-21s are known to be operational in the air force, according to the Indian military enthusiast site Bharat Rakshak, including the latest upgraded version, the Bison, the same upgraded version was being knocked by the Pakistan in the very recent dogfight between Pakistan and India and the same has been crashed a couple of days ago in Rajasthan but this time it was not the poor pilot but the poor bird behind the crash.

Nevertheless, truth be told it had certainly to be taken off service long ago even IAF pilots often joke around that it is just a hollow tube with an engine which flies very fast however, they also forget to spice up the joke that this hollow tube also lands very fast like 330-334- km/h.

The aircraft has exceeded its stress limit and recommended life and flying hours.

Premier Modi and his party won the office on the back and support of hopes that they will put India on the course to becoming a superpower and had also promised a modernize military, now again he and his party is on board with same outdated mantra very much like their so called modernized technology. But this time results are very clear already.

*Ubaid Ahmed, Independent Researcher. He can be reached at [email protected]