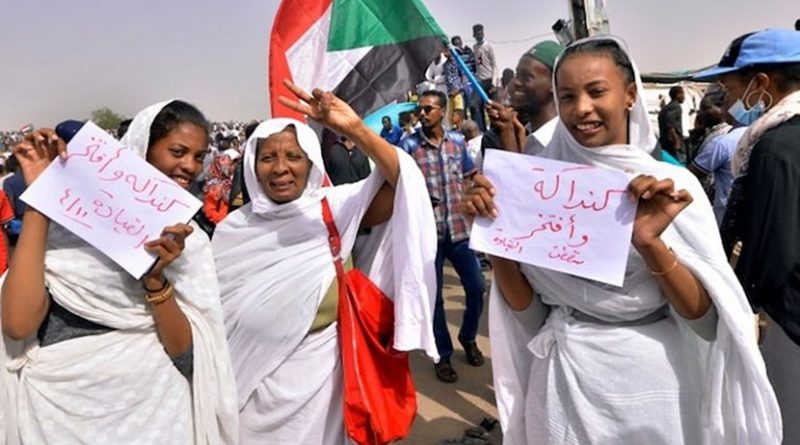 Protests that began over the skyrocketing price of bread and shortages of food and fuel have accomplished what few people believed was possible in a country ruled by a leader with an iron fist.

A Sudanese people’s movement was born on the streets of Khartoum. Hundreds of thousands of women and men hunkered down and braved attacks by anti-riot police.

“The scale of the protests is unprecedented,” Shawgi Mahadi Mustafa, a Sudanese journalist based in Qatar, marvelled. Troops that once turned back opponents with ease were unable to clear a sit-in outside army headquarters in Khartoum.

This month, the hard-line president, Omar al-Bashir, was forced to step down after three decades in power but a tough military man was put in his place. Demonstrators held the line, saying they would continue the rallies until a civilian leadership was installed.

The protesters are demanding a quicker move than the military’s announced two-year transition to an elected government.

One demonstrator, Ala’a Salah, told the Voice of America she was skeptical that the military would hand over power.

When Bashir’s regime came to power, she recalled, it was under similar circumstances. “They gave promises that they didn’t fulfil,” she said. “We need proof, not only talk, and we’re staying until our demands are fulfilled.”

The military’s transitional leadership has changed twice since it said Bashir had been placed under house arrest. Among those detained are his former interior minister Abdelrahim Mohamed Hussein, and former head of the ruling party Ahmed Haroun. The three men are all wanted by the International Criminal Court for war crimes related to atrocities in Darfur.

The military council appointed Hashem Abdel Muttalib as army chief of staff, and said the move was aimed at changing the military. Hashem was appointed by Bashir in February as vice-chief of army staff.

But the protesters appeared determined to remain in the streets, unconvinced that the military is fully on their side.

The main protest organizer, the Sudanese Professionals Association, has called for more people to join the demonstrations and the demands for civilian rule.