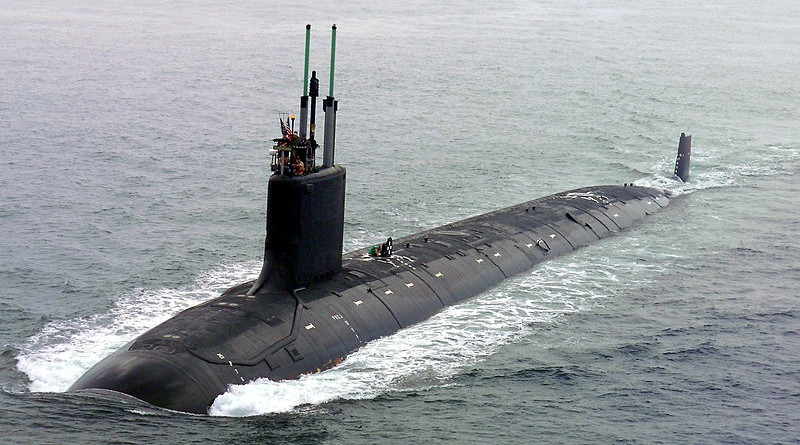 Although the traditional public commissioning ceremony was cancelled due to public health safety and restrictions of large public gatherings, the Navy commissioned USS Vermont administratively and transitioned the ship to normal operations. Meanwhile, the Navy is looking at a future opportunity to commemorate the special event with the ship’s sponsor, crew and commissioning committee.

“This Virginia-class fast-attack submarine will continue the proud naval legacy of the state of Vermont and the ships that have borne her name,” said Acting Secretary of the Navy James E. McPherson. “I am confident the crew of this cutting edge platform will carry on this tradition and confront the challenges of today’s complex world with the professionalism and dedication our nation depends on from warriors of the silent service.”

“This warship carries on a proud Vermont legacy in naval warfare and unyielding determination stretching back to the birth of our nation,” Caudle said. “To her crew, congratulations on completing the arduous readiness training to enter sea trials and prepare this ship for battle. I am proud to serve with each of you! Stand ready to defend our nation wherever we are threatened – honoring your motto – FREEDOM AND UNITY. May God bless our Submarine Force, the people of Vermont, and our families! From the depths, we strike!”

The ship’s sponsor, Ms. Gloria Valdez, former deputy assistant secretary of the Navy (Ships), offered her gratitude to everyone who played a role in delivering USS Vermont to service. She said she is proud to represent the crew and the first Block IV Virginia-class submarine to enter service.

“I am very proud of the sailors and families of USS Vermont who worked so hard to bring her to life, and also feel extremely grateful to everyone who played a role preparing her to defend our nation for generations to come,” Valdez said. “I look forward to commemorating this special occasion together with the crew in the future.”

Vermont’s commanding officer, Cmdr. Charles W. Phillips III, highlighted Vermont’s accomplishments over the past several weeks getting through initial sea trials. The hard work and dedication of the entire team during the past few years was evident in the successful execution of at-sea testing. He said he is especially thankful to the crew and their families, ship sponsor Ms. Valdez, and the USS Vermont Commissioning Committee, led by Ms. Debra Martin, for all their hard work and support of the crew.

“We recognize just how important the submarine force is during this era of great power competition. As part of the nation’s maritime asymmetric advantage over our competitors, we are ready to perform whatever duty is most needed. The crew is hungry to hone our skills at-sea and become an effective fighting unit, and we will work tirelessly to justify the nation’s confidence in us. Today marks the culmination of six years of dedicated work by the men and women who constructed the nation’s newest and most capable warship. We are all honored to be part of this historic moment,” Phillips said. “We are also grateful for the families who have supported our sailors through the long process of bringing this warship to life and dedicated their time with patriotism and selfless devotion.”

USS Vermont is the third U.S. Navy ship to bear the name of the “Green Mountain State.” The first Vermont was one of nine 74-gun warships authorized by Congress in 1816. The second Vermont, Battleship No. 20, was commissioned in 1907 and first deployed in December of that same year as part of the “Great White Fleet.” She was decommissioned June 30, 1920.

The submarine is 377 feet long, has a 34-foot beam, and will be able to dive to depths greater than 800 feet and operate at speeds in excess of 25 knots submerged. The ship’s construction began in May 2014, and it will provide the Navy with the capabilities required to maintain the nation’s undersea superiority well into the 21st century. It is the first the first of 10 Virginia-class Block IV submarines. Block IV submarines incorporate design changes focused on reduced total ownership cost. By making smaller-scale design changes, the Navy will increase the length of time between maintenance stops and increase the number of deployments.