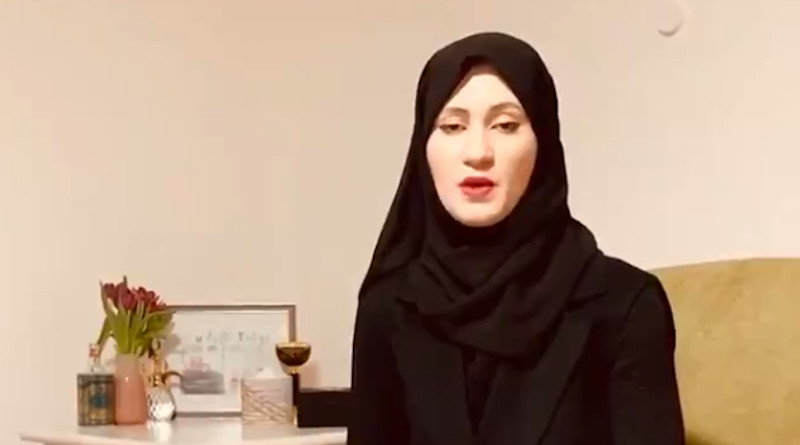 The wife of detained Qatari royal Sheikh Talal Al-Thani has made an urgent appeal to the UN High Commissioner for Human Rights, alleging that her husband is being tortured and ill-treated in custody.

Asma Arian made the claims in a statement released on Wednesday via video on her Twitter account.

Sheikh Talal, who has been detained for seven years without charge, has been subjected to “different forms of torture and ill-treatment by the Qatari authorities,” she said.

Arian added: “Sheikh Talal has been imprisoned in extremely harsh conditions and in violation of his fundamental human rights. The mistreatment to which he has been subjected has put his life in serious danger. It has also forcibly separated his younger children and myself.”

Sheikh Talal is the grandson of the late Sheikh Ahmad bin Ali Al-Thani, the former emir of Qatar who reigned from 1960 until 1972.

Arian’s plea comes amid the coronavirus pandemic, which has led to protests in prisons around the world, including Qatar, over the risk to prisoners.

“I’m very worried re reports of Qatar refusing to test prisoners suspected of having #coronavirus. My husband has medical conditions & is vulnerable,” Arian tweeted on March 29.

“Human right groups must intervene to release him urgently & unconditionally. His life is in danger. Regime bears full responsibility,” she added.

At a conference held at the Geneva Press Club in March last year, Arian said that tensions between family members escalated following the death of one of Qatar’s founders, Sheikh Abdul Aziz bin Ahmed, after his exile in Saudi Arabia in 2008.

Shortly afterwards, Sheikh Talal’s assets were frozen and the inheritance he was due to receive after his father’s death withheld.

Arian, who married Sheikh Talal in 2007, said at the time that his lack of access to any funds meant he was unable to pay his debts and was jailed.

“He was trapped into a conspiracy of signing checks. It was a set-up to make him go into business. They managed to make him sign the checks, and through that he was an easy target to put in jail,” she said at the conference.

In an interview with Al-Arabiya last year, Arian said that she and her family had been forced by the Qatari regime to live in dire conditions, placed in poor housing, and “prevented from obtaining basic health care and education.”

The family live in Arian’s native Germany and have been self-isolating, which has been especially tough, she said in a tweet.

“The last few days have been tough with the children and I self-isolating at home in Germany because of #coronavirus. 7 days and we’re finding the isolation hard. Even more thinking of my husband who has endured 7 years of arbitrary detention in the jails of Qatar,” the March 19 tweet read

“On March 12, 2020, we submitted an urgent appeal to the Special Rapporteur on Torture and Cruel, Inhumane or Degrading Treatment or Punishment on behalf of Sheikh Talal bin Abdul Aziz bin Ahmad bin Ali Al-Thani, a senior member of the royal family and a grandson of the founder of Qatar.

Sheikh Talal has been imprisoned in extremely harsh conditions and in violation of his fundamental human rights. The mistreatment to which he has been subjected has put his life in serious danger. It has also forcibly separated his younger children and myself.

Our urgent appeal details the different forms of torture and ill-treatment that the Qatari authorities inflicted and continue to inflict on Sheikh Talal with the intention of humiliating and punishing him for seeking to uphold his inheritance claim against members of the royal family.

The full details of the formal complaint are printing in my next tweet.

I continue to urge you all, especially human rights groups, to pressure the Qatari regime to preserve the human rights of my husband to torture.”