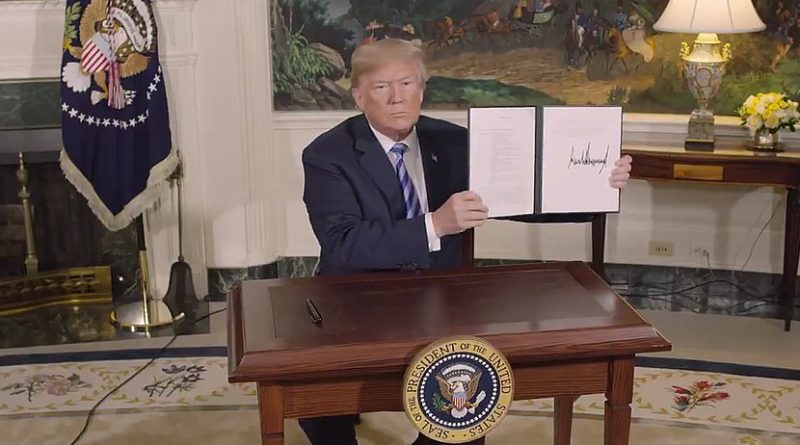 Donald Trump wants, above all, to conclude a new agreement with Iran to be able to put his name on it and to be congratulated in the eyes of the whole world. He does not fundamentally wish regime change in Tehran, but if he did not get his way on this text, he could then push in the sense of a reversal of power in Iran. For now, the Supreme Leader, Ayatollah Ali Khamenei, the real head of the Iranian state, has repeatedly rejected any possible negotiations with the American “Great Satan”, he does not deem trustworthy.

“We must change this regime.” When he uttered these words in June 2017 in front of several thousand members of the People’s Mojahedin1, an organization opposed to the Islamic Republic, John Bolton, former United States Ambassador to the United Nations, did not go out of his way. On the platform of this annual gathering in Villepinte, France, this neoconservative hawk, a supporter of the war in Iraq, welcomed the Trump administration’s change of tone towards Iran, and declared: “For ten years that I participated in this event, I repeated that the declared policy of the United States should be the overthrow of the regime of the mullahs in Tehran.” And this septuagenarian with a lush white mustache, who was thought to be offside after the Iraqi fiasco (he was at the time US Under Secretary for Disarmament Affairs), made an appointment with his public of the day “in Tehran in 2019”.

Today, however, John Bolton heads the National Security Council of the US presidency, and is one of Donald Trump’s closest advisers. According to the Wall Street Journal2, he asked the Pentagon last September for plans to launch military strikes against Iran. “People were shocked,” said an unnamed US official to this economic daily, adding: “It was staggering, his cavalier way of talking about hitting Iran.” According to the Wall Street Journal3, the Pentagon promptly provided the National Security Council with the requested plans. These included the intrusion of US aircraft into Iranian airspace, and air strikes against military sites in the Islamic Republic.

After a rapprochement under the Obama administration, during which the United States and Iran had notably become objective allies in Iraq against Daesh, the two “best enemies” of the planet are again at loggerheads since the American withdrawal of the Iran nuclear deal in May 2018. When President Trump announced to President Macron that he was going to withdraw from the agreement, the latter then asked him: “Do you want to go to war with Iran?” says a source familiar with the matter, to which the American president answered him: “Not at all. I want a better deal.”

Threats are escalating but not leading to war

Today, between Washington and Tehran, threats are escalating every day, calling into question the balancing politics pushed to extremes by both sides.

However, in an article written in Foreign Policy entitled: “Trump’s Iran Policy is becoming dangerous” Colin Kahl4 believes that growing evidence suggests the U.S. president is traveling a path toward war—whether he knows it or not5:

“If Iran or its proxies respond to U.S. pressure in ways that draw American blood or deal a major blow to critical oil infrastructure in the region, things could quickly get out of hand. Unlike in the latter years of the Obama administration, there are currently no high-level lines of communication between Washington and Tehran to manage a crisis. And hard-liners on all sides seem keen for a fight, looking for opportunities to escalate, rather than de-escalate, tensions.”

And, with much wisdom, advises the US Administration to: “dial back the rhetoric”:

“Before matters spin out of control, it would be wise for the administration to dial back the rhetoric, open high-level channels with Tehran, and signal a willingness to reenter the nuclear deal as a starting point for new negotiations. But there is zero prospect the administration will take this course. It is doubling down on a strategy of maximum tension, and there is growing evidence it is on a path toward war—whether Trump realizes it or not.”

Yet, despite the violent tone between the United States and Iran, political analysts continue to disbelieve in the outbreak of a regional war. According to these sources, US President Donald Trump is an unpredictable man, but so far, he has shown that he prefers to brandish the threat of war rather than do it. This was seeing in Syria and even in North Korea, where after having raised the tone many times, he always retracted at the last minute, even going so far as to affirm that his threat policy has reached its objective by pushing his opponent to move back.

That would be the same tactic that would be adopted today with regard to Iran, knowing that the sanctions that continue to increase seriously affect the internal social situation in Iran. But, all in all, the Islamic Republic of Iran is used to the system of sanctions since its birth. It celebrated its fortieth anniversary last February, and throughout that period it has gone through more serious crises, including the eight-year war in Iraq, which was supported by the international community and the United Nations especially in the West, whereas at that time (1980) Iran had no allies, neither in the region nor in the world.

Since then, Iran has been able to secure a degree of economic autonomy that allows it to practically consume its own products, without significantly depending on imports from abroad. While the export of its oil represents 40% of its budget, the largest countries that buy Iranian oil and which are mainly China and Turkey have announced their refusal to comply with the US decision not to buy Iranian oil. Everything will depend, in this area, on the American reaction when Iranian oil is transported to these countries.

On the effectiveness of US sanctions on Iran, Arti Sangar argues in Daiz Reus6:

“Despite these interrogations, there is little risk of a war between the United States and Iran, because it would be destructive for the whole region. Iran would not hesitate to hit the United States where it can hurt, even if it would certainly suffer. Moreover, Iranian officials, including those of the Revolutionary Guards – recently placed by the Trump administration on the list of terrorist organizations while it is an institution of the State of Iran – have increased the threats, the last few days, against the Americans in case of an attack against the Islamic Republic.”

For its part, Iran, despite the threats regularly addressed to the Americans, would not wish the outbreak of a war either, because it is aware of its consequences on the country, but also on the whole of the region. Iran does not intend to unleash the war, but is prepared to retaliate by all available means and in the places of its choice, if is attacked.

“U.S. Secretary of State Mike Pompeo has singled out Iran as a uniquely dangerous regional actor that must be confronted for the sake of peace and stability in the Middle East. In the last year alone, the administration of President Donald Trump has withdrawn from the Iran nuclear deal, announced its intention to reduce the U.S. troop presence in Syria and the wider region, and pushed for what Pompeo has called an “Arab NATO” to stand against Iran’s regional advances. Such policy shifts have led critics to question the administration’s true intentions toward Iran. Some wonder whether U.S. policy in the Middle East possesses any coherence at all, while others are certain that the administration’s real agenda is to instigate a war for regime change in Tehran. Neither interpretation fully fits the facts, and both fail to account for the evolution of U.S. Iran policy over time.”

War remains the last of the options

In spite of this more or less reassuring approach, the spiral of escalation in which the region seems to be moving may skid at any moment. However, the latest statements by the US president on his wish to bring Iranian leaders to the negotiating table, but on his terms, could be seen as the beginning of an attempt to find a way out of the crisis. Almost immediately, the Revolutionary Guards responded by expressing their refusal to negotiate, but some diplomatic circles believe that this could be the beginning of a renunciation of the option of war.

4. Colin H. Kahl is the inaugural Steven C. Hazy senior fellow at the Freeman Spogli Institute for International Studies’ Center for International Security and Cooperation and a strategic consultant at the Penn-Biden Center for Diplomacy and Global Engagement. From 2014 to 2017, he was deputy assistant to President Barack Obama and national security advisor to Vice President Joe Biden.

Home » Is An American-Iranian War In The Offing? – OpEd

One thought on “Is An American-Iranian War In The Offing? – OpEd”