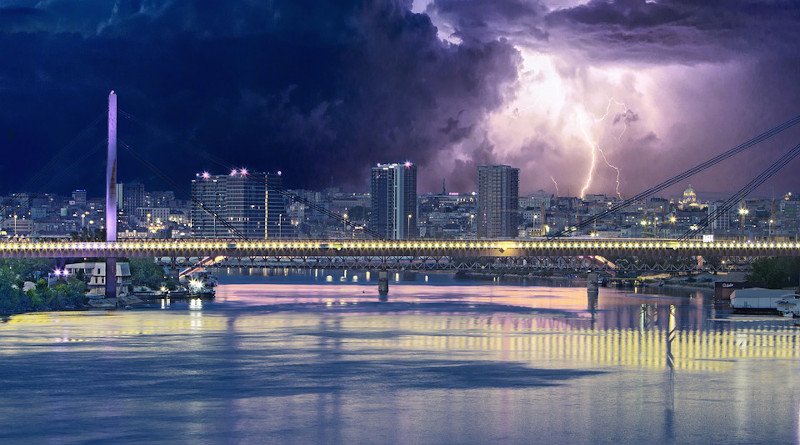 Facing an election this year, Serbia’s leaders say the country is ahead of the rest of Europe in terms of economic growth. Experts say the comparison is pointless, serving only to disguise the true picture.

On May 1, Serbian President Aleksandar Vucic had a message for Serbs fearful for their future finances in the era of COVID-19.

“I am absolutely sure,” he told a news conference, “that we will be the No. 1 country on the whole European continent this year in terms of growth rate,” and “one of the best in the whole world.”

Finance Minister Sinisa Mali echoed his party leader five days later, when he said Serbia should “get used to being the best in Europe.”

“Everything is calculated according to the same standards and I ask everyone who spreads misinformation to stop lying to these people,” Mali said.

Indeed, according to an analysis published in April by the International Monetary Fund, Serbia’s economy will suffer less than most from the lockdowns imposed across Europe and much of the world to limit the spread of the novel coronavirus.

Serbia’s gross domestic product, GDP, is forecast to contract this year by three per cent, compared to seven per cent in Germany, 7.2 per cent in France and 9.1 per cent in Italy, the original epicentre of the outbreak in Europe following its spread from China.

The European Commission – the executive arm of the European Union – sees Serbia’s output contracting four per cent, considerably less than the 7.5 per cent it predicts for the EU as a bloc.

But does this really mean Serbia is “the best in Europe” and among the best in the world, as the country’s ruling Progressive Party would have Serbs believe as they head to the polls in a parliamentary election next month?

A BIRN fact-check suggests not.

The fact the pandemic and the subsequent lockdowns have had less of an impact on the Serbian economy speaks more to the stage of Serbian economic development, the share of output generated by agriculture as opposed to services and tourism and its relatively low level of integration with the global economy, experts argue.

If the IMF estimates are the benchmark, then Vietnam, Turkmenistan, Uzbekistan, Ivory Coast, Uganda, Ghana and a host of other developing countries can claim to be among the world’s best performers too.

“It’s good we have less disruption than some other countries, but it does not mean Serbia is becoming an economic leader in Europe,” Vuckovic told BIRN.

“The circumstances in which rich and poor countries are functioning are completely different. It is natural that developed countries are hit harder by the crisis because their economies are more involved in the international economy and their services sector is a big part of GDP.”

Take 2019: Serbia recorded growth of 4.2 per cent, while Germany’s economy expanded only 0.6 per cent, its worst result in six years.

Calculated in money terms, however, Serbia’s economy grew by a meagre $889 million compared to $104.7 billion for Germany.

And living standards in the two countries can hardly be compared.

Ljubodrag Savic, an economics professor at the University of Belgrade said there was a similar situation when the global economic crisis hit in 2008. Serbia managed to notch up better growth numbers than most advanced countries, but still it did not catch up.

“Only last year did we get back to the absolute worth of GDP from 2008,” Savic told BIRN. “For the development of countries like Serbia, stable growth is all that matters, not one step back and two steps forward.”

Serbia, he said, can be thankful that the agriculture sector accounts for a sizeable chunk of the country’s overall economic output – more than six per cent – unlike Croatia, for example, where the IMF forecasts a contraction of nine per cent this year in large part because of the hit to the tourism sector that accounts for almost 20 per cent of GDP.

“Our GDP often depends on weather conditions, such as rain or drought, because of the agriculture influence on growth,” Savic said. “We don’t have much tourism except in Belgrade. We should also not be so optimistic because production is run mostly by foreign investors and they can leave Serbia whenever they want.”

Far from racing ahead, the Serbian economy – before the pandemic – was growing below its potential by about two per cent, according to a May 2019 analysis by the Fiscal Council.

And in terms of economic development and living standards, Serbia trails much of the rest of Europe.

Vuckovic said the country would be better off strengthening the rule of law, rooting out widespread corruption and attracting investment than “making monthly comparisons with the rich countries of the world.”

Per capita, Serbian GDP is half that of the countries of Central and Eastern Europe and only a third of the level of developed Western European countries.

And while GDP is a measure of the total value of goods produced and services provided in a country in a calendar year, it says nothing about how that value is redistributed. Here, again, Serbia is lagging behind the rest of Europe.

According to Eurostat, the EU’s statistics agency, Serbia has the highest social inequalities in Europe with a distribution of income ratio of 9.4.

“Growth only makes sense if it spills over into the growth of people’s living standards,” said Savic. “Money can go to paying back loans, into bad projects or to those who already have money. Most of the citizens do not feel the growth in those terms.”

Savic would not be drawn on whether Serbia’s political leaders were deliberately misleading people in an election year, “but saying we are champions of growth in Europe is completely unfounded.”

Home » Can Serbia Really Be So Proud Of Its Economic Growth? – Analysis