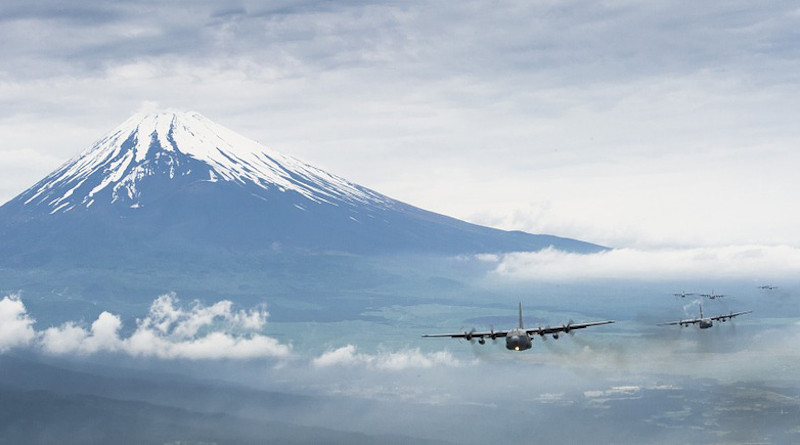 Chinese leadership within Beijing did not believe the coronavirus was a threat or top priority until January 20, 2020 – “the day Chinese authorities acknowledged person-to-person transmission,” according to the U.S. Congress Research Service (CRS). Dissent in President Xi’s administration coincided with the COVID-19 pandemic overtaking the world. A newly retired Indian foreign secretary “believes major cracks may be emerging within China’s top leadership.

State security has always been a political, cultural, and societal goal since Mao. Xi is building off these policy towards troubling expansionary moves in the South China Sea. Chinese military aircraft from the People’s Liberation Army Navy Air Force (PLANAF) have been spotted in early mid-May by commercial satellite imagery off the disputed Spratly islands. This on top of the Y-8 military transport – referred to as – KJ-200 maritime patrol aircraft landing on Fiery Cross on May 3rd, and the 2018 H-6K bomber landings on the Woody Island.

Beijing has contended for years the South China Sea artificial islands never poses a threat to commercial or sovereign rights of its neighbors such as Vietnam and the Philippines. Reinforcement of “sweeping (Chinese) maritime claims” is seemingly the new norm unless challenged. Even in foreign affairs – Chinese diplomats – referred to as “’Wolf Warriors’ have ditched niceties for threats during coronavirus crisis.” The U.S. edition of The Wall Street Journal contend “containing China will be complicated” but necessary to maintain global prosperity and security.

These landings and further militarization in soft and hard power categories that include the South China Sea have broad implications for Asian nations, and the U.S. recovering from the coronavirus. Medical monies used to halt COVID-19 will likely be diverted toward military budgets attempting to counter Chinese expansion.

The obvious choice to practice realists balancing against Beijing is the U.S. 7th Fleet, or a soft power approach is Washington decoupling global supply chains away from China. Other realist options include India securing a larger role since China “fears an emerging India-U.S. alliance as part of Washington’s Indo-Pacific Strategy.” Disagreements abound between the two most populous countries in the world over the “Dalai Lama, China’s security cooperation with Pakistan, trade, and the geopolitics of South Asia and Asia as a whole.”

Perceived threats – real or overblown – about an impending new Cold War between China and the U.S. has options rarely mentioned. Japan’s quiet military rise is a counterbalance, and realist points to consider being used without hard power being deployed.

A militarily strong Japan can stand up to China in ways unimaginable before COVID-19 struck havoc globally.  China’s global image is currently in disrepair, they are losing the narrative in world capitals the coronavirus wasn’t Beijing’s fault, high unemployment is fracturing the social compact between the Chinese Communist Party (CCP) and its citizenry; and now Chinese elites are openly questioning Xi’s authoritative leadership model.

Conflict between China and world seem inevitable – particularly, in Asia. Japan can re-orient geopolitics, security, and economics for a generation if they take on a leading role with the U.S. combining soft and hard military prowess. Policymakers should gird for greater hostility.

Hu Xijin, editor-in-chief of the Global Times, an English language newspaper controlled by the CCP wrote on May 8 – “China needs to expand its stockpile of nuclear warheads from 260 currently to 1,000.”

The U.S. “can exploit anger over China’s South China Sea ambitions,” but Japan can stop Chinese hegemony, and foul sentiment towards the CCP in Asia by cogitating on a nuclear triad. From the Japanese Diet, or parliament, in early April, Prime Minister Shinzo Abe said, “COVID-19 ‘coronavirus’ pandemic was the ‘biggest crisis’ since World War II.” Off this contagion and assertive Chinese behavior, the Diet:

“Approved a US$46.3 billion defense budget for new hypersonic anti-ship missile, helicopter upgrades that will allow for the carrying of Lockheed Martin F-35B stealth fighters.”

Japan’s appropriated hypersonic missile (HM) is a turn-key backup against a possible U.S.-China hot war conflict, and Asian-centric, jurisdictional Chinese behavior. The HM was conceived to counter Chinese aircraft carriers in the East and South China Seas. The Japanese defense establishment made this missile to “glide at high speed and follow complex patterns, making it difficult to intercept with existing anti-missile shields.”

New defense spending increases are projected at $48.4 billion in 2021 and $56.7 billion by 2024. First Japanese aircraft carrier and “Amphibious Rapid Deployment Brigade” since WWII, space security, and electronic wave research to “disrupt enemy communication systems” are being deployed in these expanded defense budgets. Emerging naval deployments and capacities allow Japan to balance Chinese expanded maritime claims out to the Yellow Sea in the Pacific.

Could the Japanese Navy be as competently superior to U.S. and Chinese naval forces in the Asia security sphere? Possibly, but Japan is obviously leaving behind its U.S.-imposed 1947 pacifist constitution – post WWII.

According to the Stockholm International Peace Research, Japan has the world’s eighth-largest military budget. Only the U.S., China, India, Russia, Saudi Arabia, France, Germany and the United Kingdom have larger defense budgets. Under-the-radar defense procurements now gives Japan forward force projection with a permanent base next to the U.S. and China in Djibouti on the Horn of Arica.

Japan is the realist key during these irrational times, and verbal back-and-forth between the U.S. and China. To Prime Minster Abe’s credit, he has refrained from blaming China for the Wuhan-inspired coronavirus. Tokyo donated medical supplies to China when they were in the grips of COVID-19 to bring sobriety to the pandemic brewing in Asia and bad blood world leaders have against Beijing.

The coronavirus pandemic brings choices to the forefront – battle lines in the Indo-Pacific being drawn – or the Japanese playing a leading role balancing China, India, and the U.S. in the largest geopolitical contest thus far in this century.