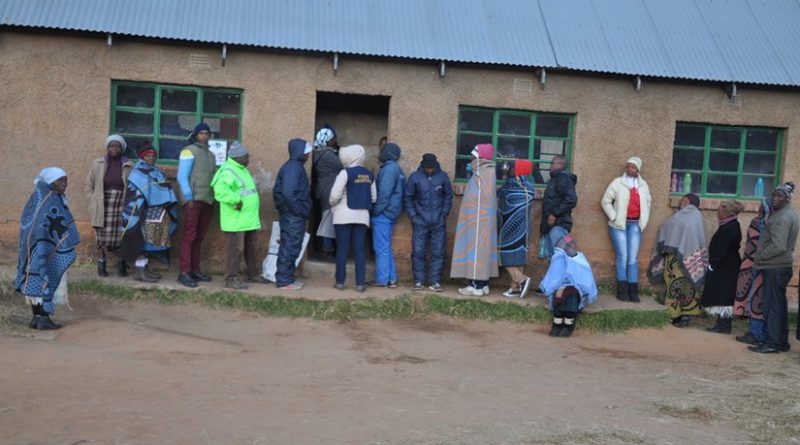 Snap elections held on June 3 have ushered Lesotho into a new political era, but the outgoing Pakalitha Mosisili government insists on setting terms for the new administration after losing the election on the heels of its earlier loss of a vote of no confidence on March 1.

The tiny Southern African kingdom has been plagued by political instability since 2014, with the Southern African Development Community (SADC) periodically intervening to restore peace and order – having also called for the 2015 snap election that was envisaged to resolve internal strife.

However, two-years down the line, Lesotho plunged into yet another election, the third in the space of five years. The latest election saw Prime Minister Mosisili lose executive power to All Basotho Convention (ABC) leader and former premier Thomas Thabane.

Although Mosisili conceded defeat and resigned, his administration has called for an international inquiry into what it calls “massive elections fraud leading to victory by the opposition Thabane-led pact” which also includes the Basotho National Party (BNP), the Reformed Congress of Lesotho (RCL) and the Alliance of Democrats (AD).

As he lost popularity, Mosisili – who leads the Democratic Congress (DC) – teamed up with the Lesotho Congress for Democracy (LCD) of outgoing Deputy Prime Minister Mothetjoa Metsing in a resolve to tighten their grip on power ahead of polls.  Their pact also included the Popular Front for Democracy (PFD) led by outgoing Minister of Home Affairs, Advocate Lekhetho Rakuoane.

“As the leaders of the four parties being the ABC, AD, BNP and the RCL, we accept the mandate given to these parties by the people through their vote, and we will therefore form the third coalition government of Lesotho,” said coalition leader Thabane.

However, Metsing, who has publicly called for the protection of the Lesotho Defence Force (LDF) – the army and air force of Lesotho – against the incoming Thabane regime, is urging the SADC to launch an urgent forensic audit of the election material used for the June 3 elections. Mosisili has, however, remained silent.

In a statement issued in Maseru on June 16 by Metsing, the coalition voiced concern over irregularities in elections as well as misconduct during the campaign period by individual parties comprising the opposition quartet that emerged victorious in the poll.

Metsing said the disgruntled alliance called for an in-depth forensic audit into electoral material that includes the national voters’ roll, certifications presented at voting stations, ballot accounts, the declaration of secrecy documents and applications for advance voting, among others.

He charged that some voters in particularly selected constituencies had registered after the closing time stipulated by the Independent Electoral Commission (IEC), that some individuals appeared several times on the electoral roll and voted twice, and that “there were also reports of people who voted yet did not appear on the roll at all.”

The government coalition has hinged its protest on Section 109 of Lesotho’s electoral law provision that “the Director (of elections) shall, for a period of 12 months after the elections period concerned, make available for public inspection the contents of all packets received by the director under this Act.”

“We forward this protest because we have tangible evidence that these elections were rigged using the voters’ roll,” said Metsing, though no evidence was adduced to support the claim. He added that evidence also indicated the registration of voters after the registration process had been closed by the IEC.

“Some of these people were added to the voters’ roll with a pen on election day and allowed to vote,” he said.

“We appeal to the SADC to conduct a forensic audit of the voters’ roll used for the June 3 elections,” the losing coalition said in a statement, further appealing for the involvement of international organisations and all stakeholders in ensuring that the audit succeeds.

In an interview with IDN, IEC spokesperson Tuoe Hantši said he was surprised at how government had accused the IEC of misconduct yet no complaint was lodged before the commission during the election period.

Nonetheless, he said, the commission had no problem with the auditing of its work, although “going to the SADC went too far because they had not even requested the IEC for an audit, which is allowed.”

Mafa Sejanamane, professor of political science at the National University of Lesotho, interprets Metsing’s utterances as tantamount to incitement to stage either a rebellion or a coup.

“We have had the experience of some politicians who tend to wrap themselves up with the army,” he said. “When they fail to get support to either stay in power or to get to power, they suddenly become the great protectors of the army against their opponents.

“Metsing has a reputation for doing just that. From 2014 when he had his difficulties with the law about corruption, he was suddenly surrounded by over a dozen heavily armed soldiers wherever he went.

“This continued until he boldly declared on national television that [Lieutenant General Tlali Kennedy] Kamoli – who had been dismissed as Commander of the Lesotho Defence Force – would remain in his position regardless. He incited continued rebellion within the military,” argued Sejanamane.

The South African government has made it clear that it will not tolerate a coup in Lesotho. “The coup thing is clear … we will not let it happen. Not in our backyard,” said the country’s Minister of International Relations and Cooperation, Maite Nkoana-Mashabane

Despite discontent on what he said were “rigged elections”, Metsing has called on the four parties that have already declared their coalition government to consider a government of national unity that would include all the parties represented in parliament.

In responding to this proposal, BNP deputy leader Joang Molapo recalled “the time we were preparing for a vote of no confidence and we approached the Mosisili-led government requesting the formation of a government of national unity for undertaking reforms because we had the numbers, but Metsing and other partners laughed at us.”

The incoming coalition’s main challenge remains the restoration of peace and stability through the implementation of the SADC-sponsored Commission of Inquiry into the killing of former LDF commander Maaparankoe Mahao by his soldiers.

Cardinal in the recommendations was the suspension of LDF officers suspected of crimes including treason, murders and attempted murder while the investigations proceeded. The Mosisili administration has since protected these suspects.

Twenty-three soldiers were imprisoned in 2015 and then placed under open arrest, while scores fled to South Africa. The government then tabled a Bill in parliament which was aimed at pardoning all LDF suspects wanted for crimes committed between 2007 and 2015. However, Mosisili was overthrown before the Bill could be endorsed by the House.

The incoming administration has voiced disinterest in the Bill, but wants to the establishment of a Truth and Reconciliation Commission that would see all people who have committed crimes and corruption confessing before the commission.

However, as it prepares to move out of office, Mosisili’s administration has set terms for the formation of such a commission. It says that the Commission should cover events beginning from 1970.

“It will not see the light of the day if it will only target Deputy Prime Minister Mothetjoa Metsing, Lieutenant General Kamoli and the events of 2014. They will not even appear before that commission if that is the case,” said Lesotho People’s Congress secretary general Bokang Ramatšella, who is also a partner in the outgoing coalition.

Kamoli and Metsing are the main suspects in the events that led to the country’s 2014 attempted coup and investigations into this incident were foiled when Mosisili came to power in 2015.