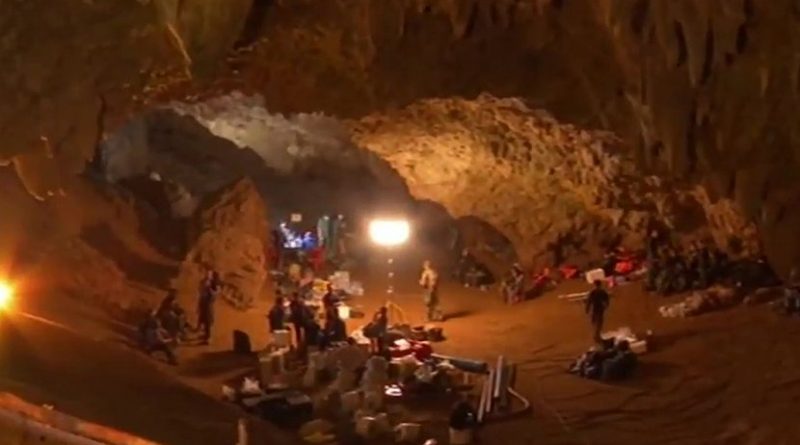 Twelve Thai boys and their soccer coach said they survived 10 days trapped inside a flooded cave without food by drinking rainwater dripping from rocks, as they offered details about their harrowing ordeal for the first time Wednesday during a news conference broadcast worldwide.

The members of the Wild Boars team, who range in age from 11 to 16, and their 25-year-old coach spoke to reporters after they were discharged from a hospital where they spent more than a week recuperating for minor ailments since their underground rescue that riveted the world.

“We tried to dig out,” coach Ekkapol Chanthavong said, as he described how they used a piece of rock in an attempt to tunnel their way out before they were found by British divers who navigated through tight, flooded passages to reach them on July 2.

One of the boys said they drank water that “fell from the rocks” during the 10 days they were perched on a muddy strip about two kilometers (1.2 miles) from the entrance of the massive Tham Luang cave in Thailand’s northern Chiang Rai province.

Ekkapol said they had ventured into the cave after soccer practice and initially intended to stay no more than an hour underground, so they did not bring any food with them. As they started to leave, they found their exit path flooded.

“We realized we were trapped on our way back,” he said.

As the floodwater rose, he said, they all decided to go deeper into the cave, believing they could find another way out. But they were confronted by sections of water that they went up to his shoulder, forcing them to swim through.

“I was really afraid at that moment,” one of the boys said.

As the hours passed, the coach told his players to stay calm, urging them to “fight and not be defeated.”

They found a muddy area on top of a rock where they decided to spend the night, the boys said, explaining they prayed before going to sleep.

The next day, they proceeded to hunt for fresh water and found it trickling down a wall in the cave.

But as the hours of waiting for a rescue turned into days, the boys started getting hungry.

The boys then decided dig through the cave’s walls, believing they could bore through the labyrinth of tunnels. But then the coach told them to stop digging.

“The coach told us to be quiet after he heard someone coming,” 14-year-old Adul Sam-on said. “I originally thought they were Thai officials.”

The coach said he told one of the boys who had a torch to investigate. The boy found the British divers who had been preparing a safety line to serve as a guide for others involved in the international rescue effort.

“It was a miracle,” Adul said, describing his shock when he saw the British divers.

Adul became famous on social media when a video released by the Thai Navy showed him speaking to the divers in English. “We are hungry,” he said then. “We have to eat, eat, eat.”

“When they emerged from the water, I was startled,” Adul said through a translator. “I did not think they were British.”

Adul was referring to divers Rick Stanton and John Volanthen, who were credited by British media with discovering the group in the dark maze of claustrophobic caverns.

The boys and their coach, wearing matching T-shirts with a graphic of a wild boar, sported new haircuts and looked healthy. They greeted friends, relatives and reporters as they arrived for the much-awaited media event.

The Thai Navy SEALs who stayed with the boys after they were found also sat beside them, together with doctors and nurses who looked after them after their rescue.

Authorities had required journalists to submit their questions in advance, warning that reporters asking “risky questions” could break the law. A psychologist pre-screened the questions before the hour-long conference.

“We don’t know what wounds the kids are carrying in their hearts,” justice ministry official Tawatchai Thaikaew told reporters, as he cautioned that the overwhelming media attention and “hard questions” could affect the boys’ mental health.

Before entering the conference hall in Chiang Rai, the boys were each given a soccer ball that they kicked around in front of a stage to prove they were healthy.

The dramatic three-day rescue, which ended on July 10, involved more than 1,000 volunteers, including dozens of divers from Australia, Britain, the United States and other countries.

The coach, also known as Ake, said all were saddened by the death of Thai Navy SEAL Saman Kunan, who was the lone casualty in the efforts to rescue the boys.

During the news conference, they showed a framed drawing of Saman. All signed the drawing, which will be sent to Saman’s family, and they confirmed they would become novice monks in his honor.

“Thank you very much for your sacrifice,” 11-year-old Chanin Wiboonrungrueng, the youngest member of the group, wrote on the drawing. “Hope you rest in peace.”

Saman, 38, died while helping place compressed-air tanks along an exit route during preparations for the operation to rescue the soccer team. Officials said he ran out of oxygen.

“I feel sorry. I am impressed by Sgt. Sam, who gave up his life trying to save 13 Wild Boars, so that we can survive to live a normal life,” said Ekkapol, the coach. “Everyone feels sorry that we were the cause for his family to grieve.”