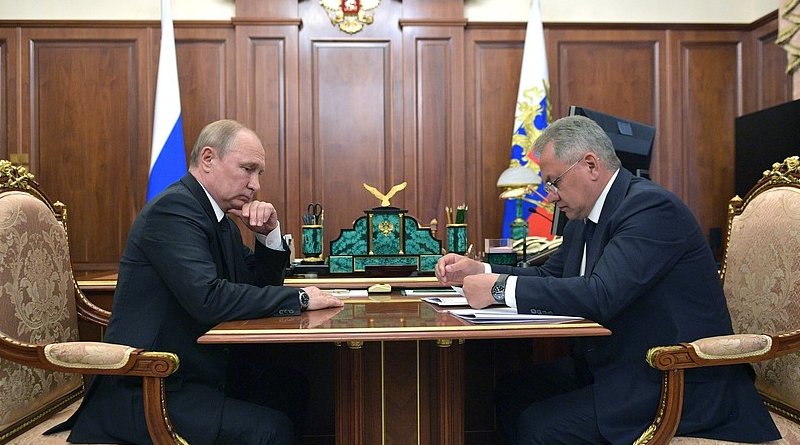 (RFE/RL) —ussian Defense Minister Sergei Shoigu said on August 18 that Moscow would not deploy new missiles so long as U.S. officials did the same in Europe and Asia.

He said his country was ready for a dialogue with the United States on intermediate- and short-range missiles and reiterated recent assertions by Moscow that it has no plans for new deployments.

“We still stick to that,” Shoigu told Rossiya-24 TV, according to Interfax. “Unless there are such systems in Europe [deployed by Washington], we won’t do anything there.”

TASS news agency quoted Shoigu as saying in the same appearance: “We are keeping the door open, we still believe that as long as the U.S. doesn’t deploy such systems to Europe, we won’t do the same, and as long as there are no U.S. missiles in Asia, there won’t be our missiles in the region.”

The statements are the latest in a volley of missile-related statements since last month when both abandoned the landmark Intermediate-Range Nuclear Forces (INF) Treaty that limited a whole class of land-based missiles since its ratification in 1988.

That abandonment came after U.S. and NATO officials’ accusations that Russia was flouting its terms.

The collapse of the INF Treaty has spurred fears of a new arms race between the world’s biggest nuclear powers.

Those concerns are compounded by a diplomatic souring over alleged meddling by Moscow in U.S. and other Western elections, Russia’s annexation of Crimea from Ukraine in 2014, and ongoing alleged support for armed separatists in eastern Ukraine, and competing approaches to Syria, Venezuela, and other international hot spots.

President Vladimir Putin said on August 5 that Russia would respond in kind if the United States developed short- and intermediate-range, land-based nuclear missiles following the demise of the key Cold War-era arms-control treaty.

Russia announced earlier this week that it had flown two nuclear-capable bombers to its Far East region across from Alaskan territory, an action state media claimed showed the Kremlin’s ability to base such warplanes near U.S. radar and missile-launch sites.

The Tupolev TU-160s, Soviet-era supersonic bombers, are capable of carrying up to 12 short-range nuclear missiles and of flying 12,000 kilometers without refueling.

U.S. President Donald Trump told reporters in early August that he would like to establish a new accord with Russia that would reduce all nuclear forces, and possibly involve China as well.