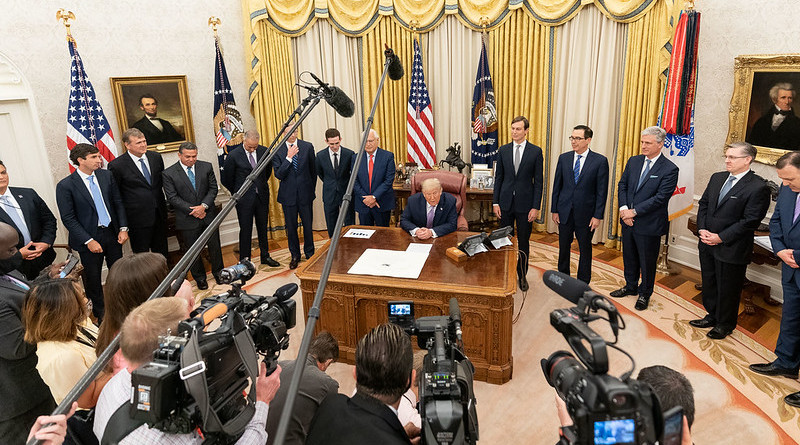 On August 13, 2020 Israel was successful in creating yet another rift within the Islamic world. The rift occurred owing to the pact sealed between Israel and UAE (United Arab Emirates) to establish formal diplomatic ties between them. The deal was struck reportedly on a phone call among President Donald Trump of USA, Israeli Prime Minister Benjamin Netanyahu and UAE Crown Prince Mohammed bin Zayed Al Nahyan.

According to some leaders, including USA, the Deal was historic and another breakthrough in the ongoing peace process in the Middle East. Major features of the Deal include:

Ever since the 1976 Arab-Israel war, Israel along with USA has been involved towards brokering peace in the region: firstly, through divisive diplomacy of dividing the Arab world; secondly, through military aggression against the Palestinians who are trying to be offensive towards Israeli military and civilians; thirdly, through USA backing peace process; fourthly, through participation in the Oslo Peace Process. Peace has been entering slowly in the region through all the four processes. Israel has thus been successful in dividing the Arab world.

August 13 Deal created another rift because it makes the UAE only the third Arab country to normalize ties with Israel. First was Egypt peace deal of 1979, and the second was Jordan when it entered into a Deal with Israel in 1994. Mauritania, another member of Arab League in North West Africa, established diplomatic relations with Israel in 1999 but severed its ties in 2010. There are also reports that many other Arab countries secretly maintain relations with Israel on the basis of assurance for mutual security.

According to Donald Trump’s administration’s Middle East Peace Plan, Benjamin Netanyahu had pledged to annex large portions of West Bank. UAE officials claim that the Deal has struck a ‘Death Blow’ to Israel’s annexation ambitions. Therefore, the Deal is very much in favour of Palestinian cause, even though it does not believe in ‘Arab Consensus’ anymore. The Deal would lead to normalization of relations with Israel. However, according to reports, Netanyahu has claimed to be committed to annexation plan of the parts of West Bank and that the suspension is temporary and does one really expect Israel fully give up the West Bank?

US under Trump leadership had adopted a ‘Vision for Peace’ in January 2020. US Ambassador to Israel, David Friedman named the Deal as “Abraham Accord”. Abraham is considered to be the father of all three great faiths, Christianity, Jews and Islam. The deal is thus in accordance with Trump’s January Middle East Plan. The plan involves redrawing the boundaries around the West Bank. It was created without consulting any Palestinian representatives. The proposal also agreed to give large chunks of portion to Israel around Jerusalem and Jordan valley. The settlements also involved the major settlements of West Bank. The Vision also set forth that all Muslims who come in peace may visit and pray at the Al Aqsa Mosque, and Jerusalem’s other holy sites should remain open for peaceful worshippers of all faiths. Earlier, Jerusalem was recognised as the capital of Israel, by USA in 2018. Thus, US pursuit of its Vision was in the process, and more of such breakthroughs are said to be in the pipeline.

However, timing of the present Deal is subject of discussion due to impending Presidential elections in November 2020. The Deal will surely benefit Donald Trump election prospects. It becomes further evident as Joe Biden his rival quickly claimed that the Deal is built on efforts of multiple administration. He meant to say the entire credit must not be given to his rival Trump, rather it is the result of several Presidents and the ongoing peace processes in the Middle East.

Supporters and Critiques: Their Arguments:

The Deal endeavours to divide the Arab World, hence there are supporters and critiques of the Deal across the Islamic countries. Bahrain, Oman and Egypt supported the deal. Iran and Turkey have criticised the deal.

Egyptian President Abdel Fatah al-Sissi tweeted that it will bring prosperity and stability to the region. It has also struck a blow to Israel’s annexation plans.

Bahrain praised the wise leadership of UAE for taking steps towards achievement of peace in the Middle East. Oman too praised the UAE endeavours.

Other Arab leaders have chosen to maintain silence, even though people across the region are up on boil against UAE. Saudis protested with placard “Normalization is Treason”.

Iran is on the wrong side of USA since long. Therefore, according to some analysts, one of the reasons of the deal may be to target Iran. Iran is recognized as the common enemy of both UAE and Israel and now both of them have joined hands against the common enemy. The deal has been called shameful and evil action by Iran and they have also warned of a dangerous future of the Emirati government. Although UAE has made repeated claims that the agreement reached is not targeted at Iran in any manner but Iranian President has termed the deal as unacceptable and betrayal by the UAE.

Turkey under Erdogan has developed an “Ottoman Complex” and now aspires for leadership role for the Arab world. Hence, it opposed the Deal to enhance its support-base within the Arab world.

The Palestinians have been firm on their demand of an independent state along the 1967 border, with Jerusalem as its capital in almost all Arab Summits. Hence, it condemned the Deal as a betrayal by a putative Arab ally and a crushing setback to their national aspirations. All the factions within Palestine were united in their criticism of the Deal. Together, they decried it as treacherous and betrayal of their cause and the ‘Arab Consensus’. Hamas the ruling party in Gaza called the UAE deal cowardly, treacherous, and stab in the back. It is an aggression against the Palestinian people. Palestinian Fatah leader Jamal Mhaisen opposed the agreement and accused that the UAE has violated the understandings not to normalize ties with Israel before the creation of an independent Palestinian state. Hanan Ashrawi, a senior Palestinian official blasted UAE that the secret dealings with Israel has rewarded Israel for not declaring openly what it’s been doing to Palestine.

There are several implications of the Deal at this opportune time, when the world is under the spell of Pandemic and USA facing Presidential elections.

First, impending US elections necessitated the Deal to organize the Jews’ votes within US in favour of Trump. Trump can present this accord as one of his important foreign policy accomplishments. Trump also expressed his wish for other Arab and Muslim countries to sign treaties with Israel. Trump has also labelled both the regions as the most capable and closest partners which will establish a peaceful, secure and prosperous Middle East. The agreement is also a rescue for the Trump for the popularity he lost at tackling the COVID 19 Pandemic.

Secondly, Israeli President, Netanyahu has been facing charges of corruption within his own country and his personality and grip on national politics is on the wane. The handling of COVID-19 Pandemic by Netanyahu too has come under criticism and has contributed to further deterioration of his personality. The Deal would thus provide some respite to Netanyahu and his connections with US will boost his personality. This would also divert the attention of Israeli citizens to Arab-Israel conflict and dynamics.

Thirdly, the Deal is indicative of the fact that the cooperation of the Israelis and Emiratis is not happening for the first time and they are united on some key issues such as Iranian threat. The relations with US will be strengthened and the deal with Israel will lead to the economic, security and scientific benefits. The UAE ambassador to US has praised the Deal saying that it is a win for diplomacy and for the region and a significant advance of the Arab Israeli relations with positive transformation.

Fourthly, it will enhance the economic opportunities and trust-building steps will be followed between Arab and Israel. Engagements between UAE and Arab countries with Israel has been witnessed in spite of all the tensions with the Palestine. This shows that many Arab countries are least concerned about the Israeli occupation of Palestine.

Fifthly, the Deal which is meant also for the Palestinian cause, Palestinians have not been involved. This shows that what globalization and economic diplomacy have also percolated deeply the Arab world. Economic diplomacy precedes he military and security concerns. Hence, pragmatism is writ large within the Arab World and they too are driven more by economic benefits and prosperity than sacrifice it for Pan Islamism. This means complete statehood to Palestine will further become a distant dream. It will be difficult for them to become independent.

Both UAE and Israel are important strategic partners of India. India needs to adopt a balanced approach towards the Arab countries as most of the Arab nations too are important for India given their Oil and India’s exports. India also has considerable Muslim population hence probabilities of a backlash, if India takes a stand detrimental to the Muslim cause. India economic engagement with Israel is increasing continuously. India gets nearly 15% of its oil from Iran. Hence, India has major stakes in the Middle East, and accordingly in need to devise its diplomacy.

Though UAE has claimed that it has acted on behalf of the Palestinians by extracting a concession from Israel that it must not pursue formal annexation of Palestinian lands; the Deal has rightly been interpreted by the critiques as betrayal with the Arab front. Palestinian are now further left in the lurch as isolated and further aggrieved. On the other hand, it could be bold Diplomacy on part of UAE in consonance with its economic aspirations. Last but important, cooperation would certainly save lives of many Christians, Jews and Muslims. Hence, somewhere protracted conflict has to give way to peace, but not at the cost of Palestinians independence.