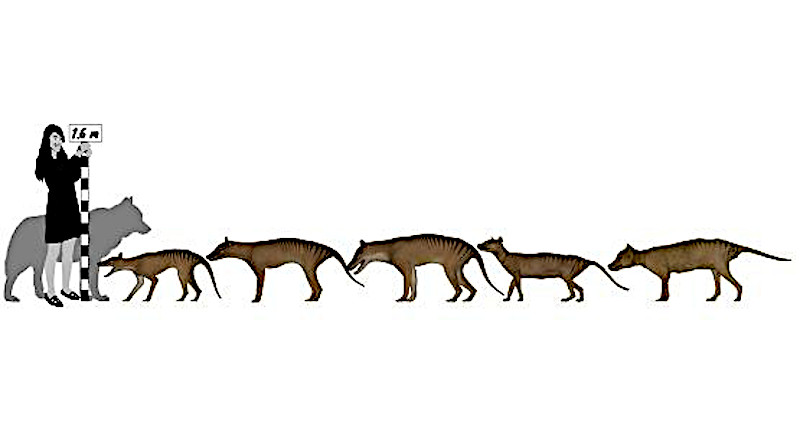 The thylacine, that famous extinct Australian icon colloquially known as the Tasmanian Tiger, is revealed to have been only about half as big as once thought - not a "big" bad wolf after all. CREDIT: Douglass Rovinsky

The thylacine, that famous extinct Australian icon colloquially known as the Tasmanian Tiger, is revealed to have been only about half as big as once thought – not a “big” bad wolf after all.

Using advances in 3D analysis, a recent study by Monash University’s Biomedicine Discovery Institute and School of Biological Sciences, shows the thylacine, an icon of Australian biodiversity and extinction, only weighed about 17 kilograms on average. This positions it as just over half the size of the previously most commonly used estimate of 29.5 kilograms, substantially revising how we understand its biology and role in Australian ecosystems.

The research, published in Proceedings of the Royal Society B, is led by PhD student Douglass Rovinsky under the supervision of the BDI’s Dr Justin W Adams and Assoc Prof Alistair Evans from the School of Biological Sciences.

It unravels the mystery of the size of the thylacine by bringing together traditional measurement techniques with advanced three-dimensional (3D) scanning and volumetric methods, and the largest database of museum specimens that spans 6 countries and incorporates 93 individual thylacines.

The researchers established that there were strong differences in the average male and female body size, with the male mean of 19.7 kilograms and female mean of 13.7 kilograms. The mixed sex population mean of 16.7 kilograms is then well below the 21 kg threshold for when predators are likely to take large prey.

“We demonstrate strong differences in average male and female body size. This result also fundamentally challenges prior views about the thylacines as a carnivore, and underscores that thylacines were a predator that evolved to consume prey smaller than themselves,” said Dr Adams.

Despite extinction in the 1930s and film footage, the species is a true enigma with almost no direct observations supporting an understanding of their behaviour and biology.

“We wish we could watch just how the thylacine hunted, and what sort of prey it could take – this is our closest look yet at an essential ingredient of the predator’s behaviour, how big it really was,” said Assoc Prof Evans.

The newly established body mass estimates for thylacines place them as specialists on small prey, challenging prior interpretations of them as convergent with species like wolves that specialise in pack-hunting prey substantially larger than themselves.

“Rewriting the thylacine as a smaller animal changes the way we look at its position in the Australian ecosystem – because what a predator can (and needs to) eat is very much dependent on just how big they are,” said Mr Rovinsky. “Many of the 19th century newspaper reports just might have been ‘tall tales’ – told to make the thylacine seem bigger, more impressive… and more dangerous!”