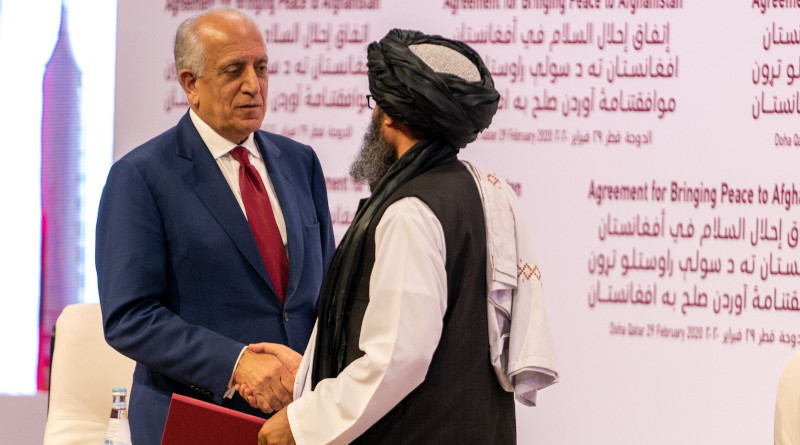 Admittedly, the US military exit arose from cumulative acts of omission and commission of all US Administrations’ since 2001 but the onus of initiation of Doha Peace Dialogues—unwarranted geopolitically—now rests with the Trump Administration. President Biden could have reversed the decision cognisant of the fact that the Afghan Taliban had reneged on the main provisions of the Doha Agreement. President Biden has asserted that he stands by his decision..

The ‘Munich Moment’ recalls the fateful moment in September 1938 when British Prime Minister Neville Chamberlain succumbed to sign the Munich Agreement in talks with Hitler’s Germany in an apparent bid of appeasement of Hitler to restrain aggression in Europe and hailing it  infamously as ‘peace at any cost’ statement.

The Munich Pact failed with Hitler reneging on the guarantees stipulated in the agreement and the Second World War was the result.

Resultantly, with United States hurried abandonment of Afghanistan 2.0, Afghanistan stands on the edge of the abyss of another Civil War and which in its wake may prompt another third US military intervention.

Reminiscently, the United States decision by the Trump Administration to enter into Peace Dialogues with the Afghan Taliban at Doha in Gulf monarchical State of Qatar smacked of the same flavour—‘Peace at any cost in Afghanistan’ even if it meant temporising with the Afghan Talban’.

The United States while entering into peace dialogues with Afghan Taliban stood oblivious of the fact that the UN Security Council had designated the Afghan Taliban as a ‘terrorist organisation’.

Perceptionaly, unbecoming of the stature and prestige of the United States as the Superpower, the American condescension to stoop to enter talks with the Afghan Taliban whose Kabul Regime in collusion with Pakistan Army’s intelligence agency—the ISI, had wreaked the 9/11 unprecedented havoc on the citadels of power in US Homeland—was geopolitically repugnant.

Contextually, in 2019 the political and military situation in Afghanistan was not so critical as to suggest or warrant an ill-advised initiative like the Peace Dialogues and the Doha Agreement of February 29 2020 with the Afghan Taliban at Doha in Qatar. The United States committed itself to withdrawal of US Forces from Afghanistan within 14 months with a host of guarantees by Afghan Taliban to desist from violent disruptive activities against Afghanistan stability and a commitment to intra-Afghan talks.

Tucking the Doha Agreement up their sleeves, the Afghan Taliban went on a wild spree of unprecedented violence, terrorism and suicide bombings. It consistently impeded intra-Afghan talks with the Kabul Regime.

Repeated perfidies and reneging on the Doha Agreement were constantly ignored in Washington in 2020 and also in 2021. In particular, US Presidential Special Envoy Zalmay Khalilzad with both the Trump Administration and thereafter with Biden Administration as the pointsman for the United States misread the genuininity of Afghan Taliban intentions.

Notably, the mood of ‘Afghanistan Fatigue’ in the United States was more noticeable Washington’s political and policy establishment than elsewhere. Nor had the ‘Afghanistan Exit’ emerged as a major issue in the last US presidential elections.

Repeated many times over in my writings on Afghanistan from mid-2000s was that US Forces in Afghanistan and US Commanders had acquitted themselves well in not letting Afghanistan fall into Afghan Taliban hands operating from safe sanctuaries provided by Pakistan in its borderlands with Afghanistan.

Putting the backdrop aside, it would be in order to briefly sketch the prevailing geopolitical environment relevant to Afghanistan in 2019 and the military situation within Afghanistan in 2019. Nothing so adverse existed for the United States either geopolitically or militarily to prompt Washington to submit to a patently catastrophic eventuality of the return of the Afghan Taliban to power in Kabul.

Geopolitically, the United States was still in an advantageous position of asymmetric superiority over both China and Russia. China was posing a challenge in South China Sea and this itself should have prompted the United States not to exit from Afghanistan which provided the potential of a strong strategic pressure-point on China’s Western Peripheries.

Russia despite strategic forays in the Middle East was not able to displace United States from the Middle East predominance or was a serious threat in Western Pacific despite the China-Russia nexus.

Geopolitical weightage of United States was reinforced by the growing intensity and coordination of the US-India Strategic Partnership and India’s move into United States strategic orbit away from its Russian bonds.

In this advantageous geopolitical dynamics the United States for reasons of US domestic political compulsions injected the Doha Peace Talks with the Afghan Taliban, little realising they were being used as a proxy weapon by the now evolved China-Pakistan-Russia Trilateral to hustle United States Forces exit from Afghanistan as analysed in an earlier Paper of mine.

Militarily, in 2019, the Afghan Taliban was denied of a complete military takeover of Afghanistan by even a reduced US Forces military presence in Afghanistan. The military advantage still stood with the United States even after sustained terrorism violence by the Afghan Taliban irregulars supported and financed by Pakistan and China with Russia in tow.

Needing highlighting is also the fact that even after 19 years the Afghan Taliban still continued as Irregular Militias devoid of any potential of offering threatening large scale set-piece battles against US Military Forces embedded in Afghanistan. Their tactical operational successes rested On Pakistan Army officering and Special Forces assistance

Concluding, in the overall analysis, there existed no credible or potent geopolitical or military compulsions for the United States to be hustled into a hurried “US Afghanistan Abandonment 2.0” which has seriously demeaned United States global stature with consequent impact on American National Security interests.

The United States’ ‘Munich Moment’ was geopolitically and militarily avoidable.

Dr Subhash Kapila combines a rich and varied professional experience of Indian Army Brigadier ( Veteran), diplomatic assignments in the United States, Japan, South Korea, and Bhutan. Served in India's Cabinet Secretariat also. He is a Graduate of Royal British Army Staff College, Camberley, UK, Msc Defence Studies from Madras University and a Doctorate in Strategic Studies from Allahabad University. Papers have been presented by him in International Seminars in Japan,Turkey, Russia and Vietnam. Credited to him are over 1,500 Papers on geopolitical & strategic topical issues and foreign policies of USA, Japan, India, China and Indo Pacific Asia. He has authored two Books : "India's Defence Policies & Strategic Thought: A Comparative Analysis" and "China-India Military Confrontation: 21st Century Perspectives"