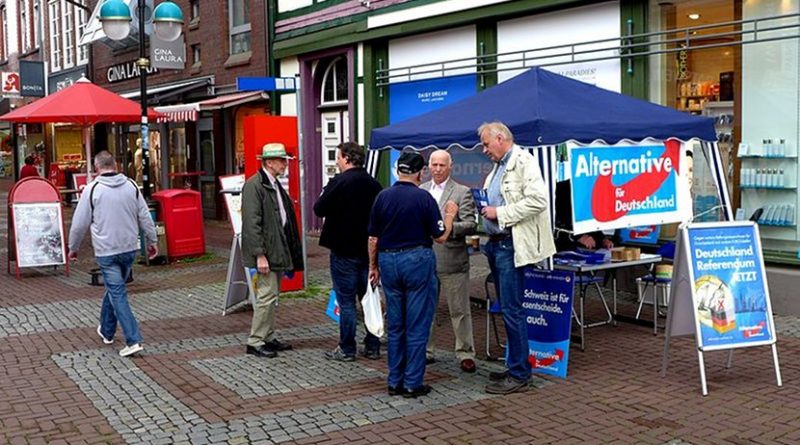 Economists and political scientists alike have tried to provide explanations for the rise of populist parties across the globe. This column examines the role of history in explaining the recent rise of the far-right in Germany. It finds that municipalities with high vote shares for the Nazi party in the late 1920s/early 1930s had also higher vote shares for the right-wing Alternative für Deutschland party in 2016/17 state elections, suggesting that historical persistence, together with a major shift in the German political landscape, can explain the rise of far-right populism.

A wave of right-wing populism has recently swept across Europe and the globe, from Viktor Orbán in Hungary to the FPÖ in Austria, from Marine Le Pen in France to the Brexit movement – and, of course, to Donald Trump. Economists and political scientists alike have tried to provide explanations for this success. Their findings suggest, among other reasons, that economic conditions are crucial factors behind the rise of populist parties. Low education, higher exposure to trade shocks and decreasing trust in the established political institutions emerge as the primary drivers of populist parties’ vote shares (Dorn et al. 2016, Inglehart and Norris 2016, Dippel et al. 2017, Guiso et al. 2017, Halla et al. 2017, van Hauwaert et al. 2017, Dustmann et al., 2017). Another recent finding within the economics literature is that cultural traits, such as xenophobic attitudes, can persist over the very long run and rise to the surface when triggered by certain events (Voigtländer and Voth 2012, Fouka and Voth 2013, Ochsner and Roesel 2017). If so, what is the role of history in explaining the recent wave of populism?

This question is particularly interesting in the context of Germany. Until the emergence of the Alternative für Deutschland (AfD) party in 2013, the German political landscape did not have a successful right-wing populist party – in contrast to most other European countries (Arzheimer 2015). Further, the AfD arguably turned from a monothematic, anti-euro and anti-Greek bailout party in 2013 to a more traditional xenophobic, anti-immigrant right-wing party after 2015. With its new, conservative rhetoric, the AfD sailed to considerable successes in the subsequent state elections held in 2016/17, reaching up to 24.3% at the state level (Saxony-Anhalt). As we write, the AfD is preparing for a federal election on 24 September, with a programme that espouses staunchly conservative values (law and order, traditional family values), but also less established views (climate change denial, scepticism of mainstream media) and borders on outright xenophobia (calling for a stop to immigration, especially of asylum seekers and family reunification, limiting access of immigrants to social security, and demanding German values rather than a multicultural society).

In recent research, we investigate the recent rise of the AfD (Cantoni et al. 2017). We find a stunning historical persistence: municipalities with high vote shares for the Nazi party in the late 1920s/early 1930s had also higher vote shares for the AfD in 2016/17 state elections. Interestingly, this relationship only appears after 2015 – the time when the conservative, anti-immigrant members took over the leadership of the party – and does not show up in the federal election of 2013, when the AfD ran merely on a fiscally conservative platform. Figure 1 shows this correlation graphically. An examination of the AfD’s language used in political manifestos, speeches at major party events, and in Facebook and Twitter posts brings out the party’s transition from a monothematic, euro-sceptical party to a xenophobic, anti-immigrant right-wing party. We have analysed a large body of text data related to German politics: 74 manifestos, 112 major speeches, over 66,000 tweets and 36,000 Facebook posts by all major political parties. We then compared the evolution of the AfD’s rhetoric, in relation to all other parties. The results in Figure 2, based on the analysis of Facebook posts, show that mentions of the topics of the euro and Greece topics decreased after 2015, whereas Islam, asylum, and Germany were topics much more frequently covered by the AfD after 2015. Note that the figure is based on a differences-in-differences setup applied to 645 word stems, thus controlling for the change in other parties’ language. It is also noticeable that a traditional mainstay of conservative political ideology, the ‘family’, does not move into the focus of the AfD’s rhetoric: the point estimate is very close to zero. We see this as suggestive of the fact that the post-March 2015 turn experienced by the AfD was explicitly nationalistic and xenophobic (anti-Muslim), not merely conservative.

Figure 2 Frequency of appearance of various topics in AfD rhetoric The shadow of Nazi support on electoral outcomes

How did the rightward turn in the AfD’s rhetoric and policy platform change its electoral fortunes? We compare the results in the federal election in September 2013, when the AfD, on a strict anti-Euro platform, barely missed passing the 5% threshold to enter parliament, to local elections to state assemblies that occurred after 2015. In this period, state elections occurred in the following six states: Baden-Württemberg, Rhineland-Palatinate, Saxony-Anhalt, Mecklenburg-Anterior Pomerania, North Rhine-Westphalia, and Schleswig-Holstein (in 2017). Thanks to the pioneering work of Jürgen Falter and Dirk Hänisch (1990), we could match present-day electoral outcomes at the municipal level to the Weimar-era party support.

As we have shown in Figure 1 above, the correlation is positive, strong, and significant. In quantitative terms, a one standard deviation increase in historical support for the Nazi party is associated with a 0.15 standard deviations larger change in votes towards the AfD. Instead, in 2013 the AfD’s vote shares are less correlated with historical Nazi support: the estimated coefficient (standardized) is only one third as large, and not significant.

Of course, a major political shift occurring concurrently in 2015, which has the potential to ignite protest vote for far right parties, was the sudden inflow of hundreds of thousands of Syrian refugees after Germany’s decision to suspend the Dublin agreement. Still, we do not think that this political event can explain away our findings. First, the AfD’s nationalist turn occurred months before the inflow of refugees (actually, at the peak of the Greek bailout crisis), not as a consequence of it. Second, we can explicitly control for the presence of refugees in a municipality: the actual presence of asylum seekers does not sway voters (in fact, a higher density of refugees is correlated with fewer votes for the AfD, albeit not significantly), and controlling for refugees does not affect the historical correlation of AfD vote with Nazi support.

We can also exclude other hypotheses:

Finally, we look at voter migration. Admittedly, drawing inference on individual voter migration patterns from aggregate data is problematic. However, our analysis of historical persistence paints an interesting picture (see Table 1 below). Overall, turnout increased between 2013 and 2016 by more than 3 percentage points; this increase was more marked in municipalities with historically high Nazi support. This suggests that the mobilization of non-voters was an important strategy for the AfD. Moreover, one can also see that two parties, in particular, lost voters between 2013 and 2016, and that these losses were stronger where historically the Nazi vote share was highest: the far-right (neo-Nazi) NPD, and the anti-capitalist Linke (Left) party. The AfD thus plausibly attracted voters from both extreme fringes of the party spectrum.

The interaction of a long-lasting historical persistence together with a major shift in the German political landscape – the entry of a populist, xenophobic party with mass appeal – thus can explain the rise of far-right populism. It remains to be seen whether the AfD, which has recently moved even more to the right and has been tainted by several scandals, can confirm its electoral successes in the upcoming federal election of next week, and whether their electoral base will still be correlated geographically with historical Nazi vote shares.

*About the authors:
Davide Cantoni, Professor of Economic History at the University of Munich

Halla, M, A F Wagner and J Zweimüller (2017), „Immigration and voting for the far right”, Journal of the European Economic Association, forthcoming.

Van Hauwaert, S M and S Van Kessel (2017), “Beyond protest and discontent: A cross‐national analysis of the effect of populist attitudes and issue positions on populist party support”, European Journal of Political Research.