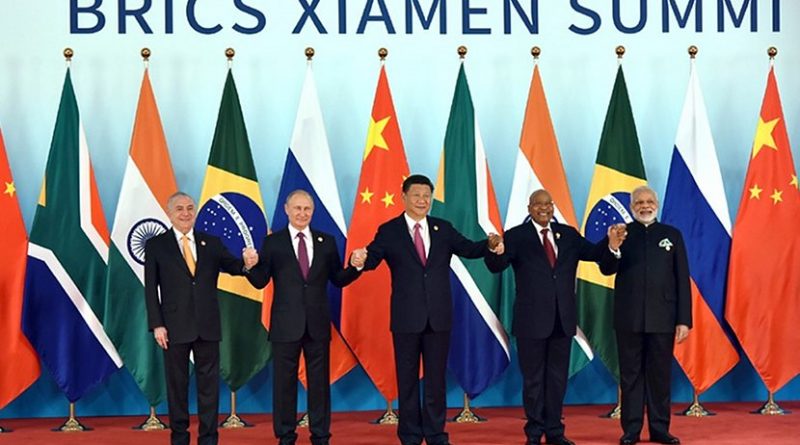 The BRICS declaration of 2017 issued at Xiamen, China, has generated significant euphoria in India. The 43-page declaration, adopted by the five member states, took a strong stance against terrorism for the first time since its inception, expressing “concern” over the security situation in the region and the violence caused by the Taliban, ISIS, al-Qaeda and its affiliates, including Eastern Turkistan Islamic Movement, Islamic Movement of Uzbekistan, the Haqqani network, Lashkar-e-Taiba (LeT), Jaish-e-Mohammad (JeM), Tehrik-i-Taliban Pakistan (TTP) and Hizb ut-Tahrir.

This is a remarkable turnaround for a grouping that was unwilling to talk about groups like LeT and JeM based in Pakistan till last year. At the 2016 Goa summit of BRICS, China had led the way in scuttling any mention of these groups in the declaration despite India making it a priority issue. This had caused considerable dismay in India with many observers questioning the very utility of a BRICS platform for India.

New Delhi successfully managed to convey its strong feelings on the issue of terrorism to Beijing and Xi Jinping, who wanted to make the BRICS summit a success, had no compunction in taking on the issue as part of the declaration.

Chinese foreign ministry spokesperson Geng Shuang justified his country’s stand by suggesting that with this declaration, BRICS countries have “shown their concerns to the violent activities raised by these organisations.”

“These organisations are all sanctioned by the UN Security Council and have a significant impact for Afghanistan issue,” Geng underlined.

That Pakistan saw this as a real challenge was evident in its Foreign Minister Khawaja Asif’s remarks that, “We [Pakistan] need to break our false image. We have no stake but there is baggage. We need to accept the history and correct ourselves.” Islamabad was worried about China’s stance and Asif made it clear that Pakistan needed “to tell our friends that we have improved our house. We need to bring our house in order to prevent facing embarrassment on an international level.”

While there is much to commend in the way Indian diplomacy managed to get Chinese support on this issue and the likely pressure it will put on Pakistan to clean up its act, it is also true that it is unlikely to change much on the ground in so far as Sino-Pak ties are concerned.

Pakistan’s Foreign Minister, too, paid a visit to China recently when he was reassured by Chinese Foreign Minister Wang Yi, that “there has been no change in Chinese policy regarding Pakistan…Pakistan and China are in constant contact regarding regional challenges,” he added, stressing that China supports Pakistan’s stand on terror.

China’s support for the BRICS declaration has merely been a tactical ploy to make the summit a success. Its long-term strategic interest has always been to build Pakistan as an equal to India to block New Delhi’s ascent in the global hierarchy. And this strategy is not going to change anytime soon.

The Xiamen declaration should, therefore, be evaluated accordingly. In any case, India’s bid in the UN Security Council Sanctions Committee 1267 to list action against the JeM chief Maulana Masood Azhar will be back next month. And Chinese actions will speak for themselves.

This commentary originally appeared in DNA.

Home » BRICS Declaration On Terrorism Is Only An Eyewash – Analysis