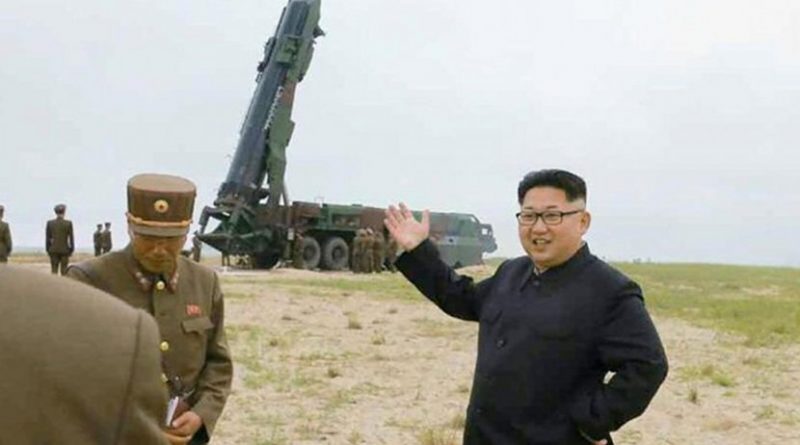 (FPRI) — So now we have a North Korea armed with long-range missiles and thermonuclear weapons. Make no mistake. This is the new normal. Pyongyang will never give them up, and no one can make them do so.

The follow-on effects of this development will transform global politics and security policy. A wave of nuclear proliferation and military buildup is definitely to be expected. So one must ask: given our knowledge of what was going on in North Korea, how did we ever let this happen? Also we must ask, what realistically can be done to lower the threat of war?

In 1994, when President Bill Clinton announced the “agreed framework” with Pyongyang that he claimed to believe would solve the problem, I found myself in guest quarters at the Naval War College in Newport, R.I. with my wife (from China) of just six years. President Clinton said, “North Korea will freeze and then dismantle its nuclear program. South Korea and our other allies will be better protected. The entire world will be safer as we slow the spread of nuclear weapons.”

The American president also stressed that security would be maintained and that United States determination was firm.

Puzzled, my wife asked me, “What is this man saying.” I responded, “This, my darling, is what in America we call an ‘empty threat’”  . . . and indeed it proved to be just that. Within six years, the CIA had detected North Korea’s clandestine program. In 2006, Pyongyang carried out her first nuclear test. “Experts” stated that alone North Korea was incapable of developing delivery systems or increasing the size of her arsenal. 2020 was given as the then conveniently remote date when Pyongyang might pose some rudimentary threat.

What went wrong? Intelligence failure of course. Inability to imagine what was going to happen as well. A failure of policy which sought to use negotiations and incentives (the provision of light water reactors) to bring Pyongyang around. Most important was a failure to take seriously the lessons of history.

Think of WWII. In Hitler’s time, the highest ranks of the military and security apparatus contained many opposed to war. They planned to carry out a coup if the Führer invaded Czechoslovakia. Those involved included Foreign Minister Konstantin von Neurath; Head of Intelligence Colonel Hans Osler; Head of Counter- Intelligence Admiral William Canaris; Chief of Staff of the Army Colonel-General Ludwig Beck, and  the opposition contained many others—less well organized, from political parties as well as Protestant and Catholic Christians.  When the Czech plans became known by the army, General Beck and others sent envoys to London and Paris who were rebuffed. Not, that is, until British Prime Minister Neville Chamberlain and French Prime Minister Édouard Daladier came to terms with Hitler at Munich, in September 1938, sacrificing Czechoslovakia, thus inadvertently destroying the whole plan. Other plans were also made, but this one was perhaps the best chance. Reaching Czechoslovakia required passing through fortified mountain passes, and with the famous Škoda Works munitions factory supplying them, the efficient Czech army might well have broken Hitler’s momentum with a stalemate on difficult ground. It was, in other words, worth a try. The French and British governments should have reacted positively. Terrified, however, Chamberlain and others became intoxicated by a delusional vision of peace through sincere negotiation with Hitler and appeasement—i.e. letting him invade other countries, but not yours. The might-have-beens continue to add literature to an already substantial mountain of speculation.[1]

The historical lesson here is that often prairie fires are started by discarded matches showing almost no flame. Douse the match somehow and all will be well: otherwise, hundreds of thousands of acres may go up in a firestorm.

In geopolitical language, this means force or the credible threat of force are best used the instant a threat is detected. Civilized people, however, tend to place actual force far down the list—after engagement, negotiations, incentives, embargoes, etc. which do not work when a country is genuinely on the warpath.

Possibly, World War II could have been averted as late as 1938, but by 1939, Germany learned that the allies would not resist, so the war could only be fought to the bloody finish.[2]

Likewise, North Korea could have been stopped in 1994 by military threats or even strike operations against their nuclear facilities. Instead, we wasted time heedlessly and profligately. We weren’t even serious. No one had a gut sense of how bad things could really get. Yet, ask our people about how appeasement strengthened Hitler, and many could have given intelligent answers. But to them, this was history; it resided in their brains, but not their bones; they would never have made nor make such mistakes.

At that time, we also still harbored grave delusions with respect to Beijing’s interest in cooperation on the issue. In fact, one year after Clinton’s speech, China’s government made her first tentative move toward what is now territorial expansion greater in size than even that of the Third Reich at its largest—with the annexation of Mischief Reef from the Philippines.

Had we or the Philippines sent forces simply to demolish this minor maritime feature, China might well have desisted. Likewise, had the allies prepared for war or actually fought over Czechoslovakia, Hitler would never have acquired the aura of invincibility that so benefited his campaigns.

Now, the new situation has ratcheted into place. South Korea and Japan will likely become full nuclear powers. The existing East Asian arms race will pass through India to the western borders of Russia, thus menacing Europe. No solution exists any more, except a balance of terror. Sad nay tragic, but SO human. Welcome to the pre-war period.

About the author:
*Arthur Waldron has been the Lauder Professor of International Relations in the Department of History at the University of Pennsylvania, since 1997. He works mostly on the history of Asia, China in particular; the problem of nationalism, and the study of war and violence in history. Educated at Harvard (A.B. ’71 summa cum laude Valedictorian, PhD ’81) and in Asia where he lived for four years before returning to Harvard. He previously taught at Princeton University, the U.S. Naval War College (Newport, RI) and Brown University. His publications include The Great Wall of China: From History to Myth (1989) also in Chinese and Italian; The Modernization of Inner Asia(1991); How the Peace Was Lost: The 1935 Memorandum “Developments Affecting American Policy in the Far East” Prepared for the State Department by John Van Antwerp MacMurray (1992) also in Japanese; From War to Nationalism: China’s Turning Point, 1924-1925 (1995) also in Chinese, and (with Daniel Moran) The People in Arms: Military Myth and National Mobilization since the French Revolution (2003).