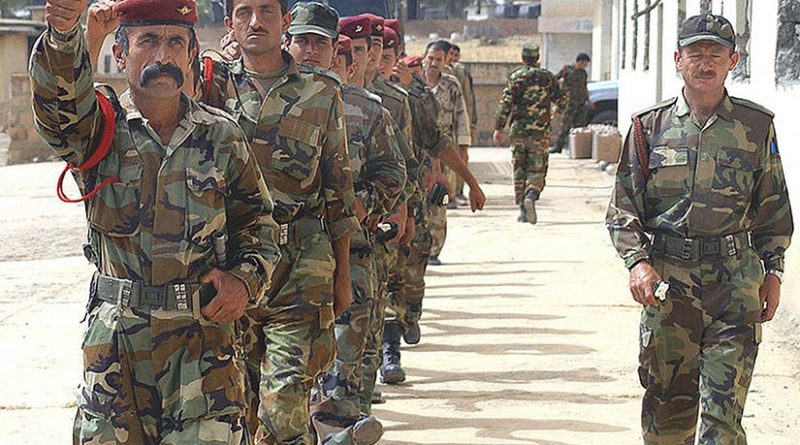 There may be a silver but risky lining for Kurdish nationalists in their devastating loss of Kirkuk and other cities on the periphery of their semi-autonomous region as they lick their wounds and vent anger over deep-seated internal divisions that facilitated the Iranian-backed Iraqi blitzkrieg. Mounting popular anger coupled with US Congressional fury could, however, position the Kurds as a key player in potential US efforts to roll back Iranian influence in Iraq and counter the Islamic republic as part of President Donald J. Trump’s tougher approach towards the Islamic republic.

Kurdish President Massoud Barzani, in his first comment on the military rout of his Peshmerga forces, vowed that last month that the overwhelming vote for Kurdish independence in a controversial referendum “won’t be in vain.” Refusing to take responsibility for the rout, Mr. Barzani blamed the Kurdish predicament on his political rival, the Patriotic Union of Kurdistan (PUK.) that allegedly ordered the withdrawal of Kurdish forces from Kirkuk.

Technically, that may well be correct. An Iranian Revolutionary Guard general and close associate of Quds Force chief Qassem Soleimani known as Eqbalpour, accompanied by two Iraqi military commanders, reportedly met on the eve of the Iraqi assault on Kirkuk with Kurdish officers in the offices of the PUK in the city. Eqbalpour urged the Kurds to surrender the city peacefully.

“If you resist, we will crush you and you will lose everything,” he warned, pointing to a map that detailed how the Iraqi assault would unfold. “This is our military plan. We will hit you tonight from three points — here, here and here,” Eqbalpour said. His Kurdish interlocutors agreed to withdraw.

The Kurdish withdrawal, prompting a Kurdish exodus from the city, was a stab in the back of the PUK’s arch rival, the Kurdish Democratic Party (KDP), that is headed by Mr. Barzani. It has sparked a wave of popular anger against Iran that could complicate any effort to negotiate a compromise between the Kurds and the government in Baghdad of Prime Minister Haider al-Abadi. who has vowed to ensure Iraq’s territorial integrity.

Iranian involvement in the Iraqi blitzkrieg has also sparked anger in the US Congress even though the United States, which enabled Kurdish autonomy within Iraq, vowed to remain neutral in the Kurdish-Iraqi dispute. Congressmen threatened to impose an arms embargo on Iraq, now that the Islamic State has effectively lost control of any territory in the country, in response to the alleged use of US-built Abrams tanks and Humvees against the Kurds by Iranian-backed Shiite militias known as the Popular Mobilization Units (PMU).

The United States provides an estimated $1 billion in annual military assistance to Iraq. It has designated some elements of the PMU as terrorist organizations.

In a statement, Senate Armed Services Committee Chairman John McCain called on Iraqi forces to “take immediate steps to de-escalate this volatile situation by ceasing their advances. I am especially concerned by media reports that Iranian and Iranian-backed forces are part of the assault. Make no mistake, there will be severe consequences if we continue to see American equipment misused in this way,” Mr. McCain said.

Mr. McCain’s words were echoed by Rep. Trent Franks, a member of the House Armed Services Committee, who introduced a resolution in Congress supporting Kurdish independence. “I urge Iraqi Prime Minister Al-Abadi to fulfil his pledge to prevent any external or internal attack against the Kurds and prove Baghdad is not the puppet of Tehran. Otherwise, the US will have no other choice but to pull funding as it cannot in good conscience send money to an Iranian patsy working to subvert American interests,” Mr. Franks said.

Despite Iraqi denials that the PMU have access to US weaponry, Kurdish emphasis on the role in Kirkuk of the Iranian-backed militia and assertions of use of Abrams tanks and Humvees was designed to garner US support. Iraq’s embassy in Washington charged that the claims constituted “a concerted misinformation campaign by elements in the Kurdish region to cover up their sinister actions in attempting to disrupt the coordinated and professional movements of the Iraqi security forces.”

The Kurdish assertions amounted to an attempt to make it difficult for the US Department of Defense to certify, in accordance with US law, that Iraq has ensured that US military assistance does not fall into the hands of extremist groups that include those elements of the PMU that have been designated by the State Department.

The Kurdish position, beyond the immediate politicking that aims to weaken Iraq’s position in any future negotiation, and garner US empathy if not support, also positions the Kurds as a potential US ally in any upcoming attempt to counter Iranian influence in Iraq or destabilize the Islamic republic with the help of ethnic groups that populate its borders.

Mr. Trump signalled his tougher approach towards Iran by earlier this month refusing to certify that Iran was complying with the terms of a two-year-old nuclear agreement that opened the door to the lifting of international sanctions. A potential re-imposition of sanctions by Congress in the next sixty days could throw the accord into jeopardy.

US and Saudi officials have repeatedly hinted at the possibility of attempting to achieve regime change in Iran. The Kurds, like the Baloch in Pakistan, could play a key role in any such effort. It is a strategy that would likely exploit anti-Iranian sentiment among Kurds in the wake of the Iraqi blitzkrieg, enjoy support from Israel which has already publicly come out in favour of Kurdish independence, and build on past US and Israeli support for Kurdish nationalism.

That is support that ultimately did not help the Kurds fulfil their aspirations. There is no guarantee that a repeat performance would fare any better. Kurds defended last month’s referendum with the argument that there is no good time for them to stake their claim given deep-seated Turkish, Iranian and Iraqi rejection of their aspirations for independence. That makes their current attempt and potential participation in covert operations against Iran no less risky.