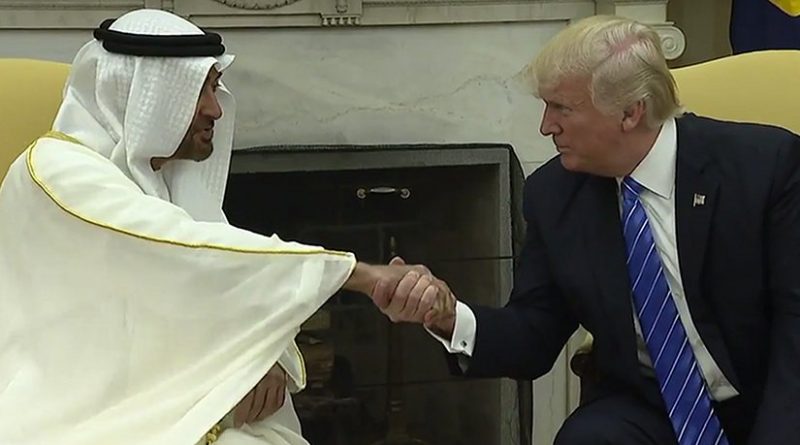 During his speech at this year’s annual meeting of the United Nations General Assembly in New York, the foreign minister of the United Arab Emirates (UAE) mounted a stern verbal attack against the Islamic Republic of Iran. Sheikh Abdullah bin Zayed al Nahyan accused Tehran of making efforts to destabilize the region and violate the nuclear deal with the P5+1 group of countries, known as the Joint Comprehensive Plan of Action (JCPOA).

Now, the question is why the UAE adopts such sharp positions against the Islamic Republic of Iran? In response, one can claim that although the UAE has extensive economic relations with Iran, when it comes to political matters, it has consistently adopted a policy, which has been against Iran. The main reasons behind adoption of that policy include profound differences that exist between the two countries, the UAE’s alignment with Saudi Arabia and the United States, and finally, the differences that Tehran and Abu Dhabi have over three Iranian islands in the Persian Gulf.

Following the victory of the Islamic Revolution in Iran, the United Arab Emirates emerged as an active member of a group of regional Arab states, which subsequently established the (Persian) Gulf Cooperation Council [GCC]. This country considered the Islamic Revolution in Iran as a major threat to its political stability, because a country like the UAE, which follows conservative policies, could not tolerate a country with revolutionary positions in its neighborhood. After the Iraqi imposed war against Iran started, the UAE, along with other member states of the GCC, rushed to help Iraq. In return, the former Iraqi dictator, Saddam Hussein, clearly asserted that the three Iranian islands in the Persian Gulf, including the Greater and Lesser Tunb islands and Abu Mousa Island, belonged to the Arab nation and had been occupied by Iran.

Dubai gradually turned into an important trade hub in West Asia as a result of the economic policies adopted by the rulers of the United Arab Emirates. Part of that prosperity, however, was owed to extensive trade with Iran, whose volume kept incessantly rising. As a result, the UAE has been following two contradictory policies with regard to Iran. On the one hand, Abu Dhabi, which is the biggest emirate in the UAE, has been following hostile policies against the Islamic Republic of Iran and its hostility against Tehran has been increased in parallel to the rise in its power as a function of the rising global energy price. On the other hand, the emirate of Dubai has had better relations with the Islamic Republic due to the high volume of trade between that emirate and Iran.

Following major upheavals in the Arab world, which started in 2011, the UAE’s anti-Iran policies were further strengthened, because this country, like most other Arab states along the southern rim of the Persian Gulf, blamed actions taken by the Islamic Republic of Iran as one of the reasons for those developments.

This trend led to downgrading of political relations between the two sides in the early 2016 following escalation of tensions between Saudi Arabia and the Islamic Republic of Iran. The UAE officials intensified their verbal attacks against Iran. They also took further steps against Iran, which covered a wide range and included anti-Iran measures within the international bodies, increasing media propaganda against Iran, making anti-Iran efforts through the UAE’s lobby groups and its embassy in Washington, harassing Iranians living in the UAE, refraining from issuing visa to Iranian teachers working in the UAE, and conducting provocative military drills in the Persian Gulf. On the whole, the following instances can be enumerated as the most important reasons behind rising tensions between the United Arab Emirates and the Islamic Republic of Iran:

3. Differences over the issue of Yemen: The United Arab Emirates has been an active member of the Saudi-led coalition that has been engaged in a military invasion against Yemen to suppress the country’s Ansarullah movement. As a result, the Emirati forces have been working along with the Saudi military to help those Yemeni forces, who are still loyal to Yemen’s former president, Abd Rabbuh Mansur Hadi. On the opposite, the Islamic Republic of Iran has taken sides with the popular government ruling Yemen and has been throwing its weight behind Ansarullah. This issue has been a bone of contention between the two sides.

4. Convergence with Saudi Arabia: Another variable, which has greatly affected the UAE’s anti-Iran policy, is increasing convergence between the interests of the United Arab Emirates and Saudi Arabia. During recent years, there has been a special convergence between these two countries, the highlight of which was probably severance of both countries’ relations with Qatar. It seems that whenever these two countries have common norms and ideas about international issues, some sort of convergence followed by increased cooperation takes shape between them. In this case, common factors between the UAE and Saudi Arabia include the need to further bolster the GCC, a feeling of threat from the Islamic Republic of Iran, both countries’ conflict of interests with Qatar, common oil policies as well as a common mentality shared by Sheikh Mohammed bin Zayed Al-Nahyan, the crown prince of Abu Dhabi, and Mohammad bin Salman, the crown prince of Saudi Arabia.

5. Territorial disputes between Iran and the UAE over three Iranian islands: The United Arab Emirates has a claim to ownership of three Iranian islands in the Persian Gulf, including the Greater Tunb, the Lesser Tunb, and Abu Mousa. Iran, however, has persistently rejected the UAE’s claims while asserting its sovereignty over these islands. During recent years, and in parallel to increasing economic and military power of the UAE, the country has been insisting more on its unrightful and illegal claim. The United Arab Emirates is apparently trying to take advantage of the opportunity provided to it by the conflict of interests between Iran, on the one hand, and the West – especially the United States – and Saudi Arabia, on the other hand, and give legitimacy to its claims by getting more countries in line. However, due to lack of adequate evidence to prove the UAE’s claim and also because of the Islamic Republic of Iran’s political and military power, it has not been able to do anything in this regard yet.

The United Arab Emirates is one of the Persian Gulf countries, which while having extensive economic relations with Iran, also suffers from powerful and serious conflict of interests with the Islamic Republic when it comes to regional and international policies. As a result, it has teamed up with the United States of America and Saudi Arabia in taking various measures against the national interests of the Islamic Republic of Iran. On the other hand, Iran has tried to avoid any reciprocal actions against the UAE in line with good neighborly relations and also due to various trade and economic advantages that Dubai has for Iran and in a bid to protect the interests of Iranian businesspeople and other nationals that reside in the UAE. However, the Islamic Republic of Iran must warn officials of the UAE not to sacrifice the existing political and economic relations between the two countries as a result of the perceived threat of Iran, which has been cooked up by Saudi Arabia. Iran must advise the Emirati leaders to adopt policies, which would facilitate good neighborly relations through a better approach to the existing realities in the Persian Gulf region. At the same time, the Emirati officials must note that the Saudi hegemony in the Arabian Peninsula, which has so far led to the war in Yemen and severance of relations with Qatar, may turn into a threat to them in the future as well. This is true because continuation of Saudi Arabia’s policy will gradually strip all Arab states of the Persian Gulf region of their independence.