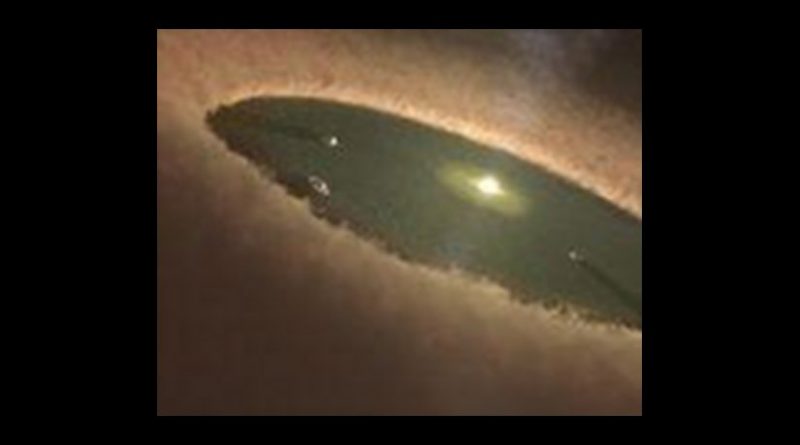 This is an artist's conception of planets forming in a transition disk like LkCa 15. The planets within the disk clearing sweep up material that would have otherwise fallen onto the star. Credit: NASA/JPL-Caltech

An international team of scientists in Australia and the United States has captured the first-ever images of a planet in the making. The accumulation of dust and gas particles onto a new planet – the process by which the planet continues to form and grow – has been directly observed for the first time.

None of the nearly 1,900 planets previously discovered and confirmed outside our Solar System (called exoplanets) are in the process of formation.

The findings of the scientists, led by University of Arizona graduates Steph Sallum and Kate Follette and including the University of Sydney’s Professor Peter Tuthill, are published today in Nature.

A star known as LkCa 15, located 450 light years from Earth, has been observed exhibiting all the trappings of an expectant parent: it is surrounded by a vast disc of dust and gas, making an ideal environment for planets to grow from; the dust shows distinct signs of disturbance – something within has eaten away part of the disc.

Co-author of the paper, Professor Tuthill, said the images provided unambiguous evidence. “This is the first time we’ve imaged a planet that is definitely still in the process of forming.”

The photo provided the proof: “The difficulty had been that when you have indirect evidence, there are always alternate explanations that might fit the data,” Professor Tuthill said.

Researchers are just now being able to image objects that were close to and much fainter than a nearby star, thanks to specialised instruments. These include the Large Binocular Telescope – the world’s largest telescope, located on Arizona’s Mount Graham – and the University of Arizona’s Magellan Telescope and its Adaptive Optics System, MagAO, located in Chile.

“When you look through the Earth’s atmosphere, what you’re seeing is cold and hot air mixing in a turbulent way that makes stars shimmer,” Professor Close said. “To a big telescope, it’s a fairly dramatic thing; you see a horrible looking image.” The breakthrough was possible because the Large Binocular Telescope was purpose-built, incorporating a novel imaging technique to sharpen the images.

When cosmic objects are forming, they get extremely hot, and because they are forming from hydrogen, those objects all glow a deep red, which astronomers refer to as H-alpha, a particular wavelength of light.

That single shade of red light was emitted by both the planet and the star as they underwent the same growing process, Dr Follette said.

“We were able to separate the light of the faint planet from the light of the much brighter star and to see that they were both growing and glowing in this very distinct shade of red,” she said.

Professor Tuthill said the results were only made possible because of the application of a lot of very advanced new technology to the business of imaging the stars.