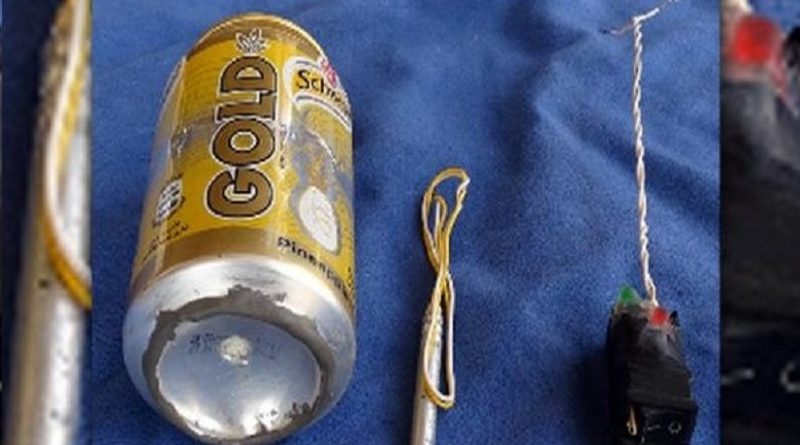 On Wednesday, an Internet message allegedly from the Islamic State of Iraq and Syria (ISIS) showed a photograph of the alleged bomb — improvised explosive device (IED) — that brought down a Russian airliner in the Sinai Peninsula killing more than 220 passengers and crew.

The picture was published in the radical Islamic English-language magazine, Inspire, with the caption “Image of the IED used to bring down the Russian airliner.” The photo shows an empty can of Schweppes Gold, a non-alcoholic beverage sold in Egypt, as well as other components used to create the IED.

More than 16,500 improvised explosive devices were detonated — or discovered before detonation — against U.S. military personnel deployed in Afghanistan in 2011 proving that the improvised explosive device (IED) is the current terrorists’ and insurgents’ weapon of choice, according to a government report obtained by the National Association of Chiefs of Police’s Explosives and Incendiary Devices Study Group.

According to officials at the Department of Defense, IEDs will most probably be encountered in present and future conflicts due to being relatively inexpensive to develop while their effectiveness is proven by the number of military deaths and casualties, as well as the destruction of military vehicles and other assets. And that doesn’t include those IEDs developed by domestic terrorists on the U.S. mainland that will be encountered by police bomb squads.

A number of DOD divisions, including all of the military branches, have been pursuing counter-IED (C-IED) efforts leading up to June 2005 when DOD established the Joint IED Defeat Task Force, followed in 2006 with the creation of the Joint IED Defeat Organization (JIEDDO) to lead and coordinate all DOD actions to defeat IEDs.

“From fiscal years 2006 through 2011, JIEDDO has received over $18 billion in funding, however, DOD has funded other C-IED efforts outside of JIEDDO, including $40 billion for Mine Resistant Ambush Protected vehicles,” states the Government Accountability Office report.

GAO analysts reported in February 2012 that DOD does not have full visibility over all of its C-IED efforts. DOD relies on various sources and systems for managing its C-IED efforts, but has not developed a process that provides DOD with a comprehensive listing of its C-IED initiatives and activities.

In response to a GAO recommendation that the Secretary of Defense direct JIEDDO to develop an implementation plan for the establishment of DOD’s C-IED database including a detailed timeline with milestones to help achieve this goal, DOD officials said that a revision of DOD’s Directive No. 2000.19E will contain a new task requiring combatant commands, the military services, and DOD agencies to report C-IED initiatives to JIEDDO.

GAO analysts stated in their report: “This would include programming and funding pursued by a military service, combatant command, or other DOD component, in addition to activities funded by JIEDDO. In January 2012, DOD estimated it would complete draft revisions to DOD Directive 2000.19E in early 2012, but as of July 2012, Office of the Secretary of Defense (OSD) officials stated that the revised draft was under review at the OSD level, and therefore, not issued.