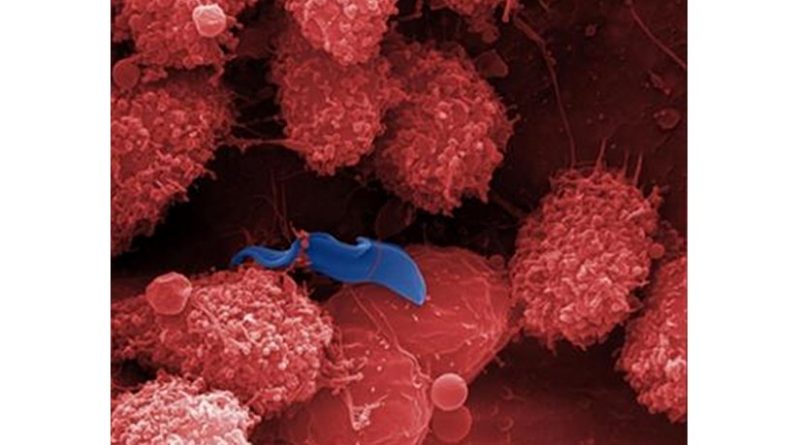 An old mystery as to the cause of especially smelly camel urine, with implications for the millions of people affected by African parasites called trypanosomes, has been solved by biochemists from Trinity College Dublin. These parasites frequently cause fatalities via sleeping sickness.

The biochemists have unearthed a metabolic by-product of trypanosome activity known as indolepyruvate, which may offer excellent possibilities for developing anti-trypanosome drugs and therapies because inhibiting its production may be key in fighting the parasite.

Additionally, because this by-product modifies the behavior of important immune cells and prevents them from becoming fully active, it has potential as an inhibitor of common inflammatory diseases.

Professor in Biochemistry at Trinity, Derek Nolan, and his team collaborated with Professor of Biochemistry, Luke O’Neill, and his inflammation research group to make the discovery. Their findings have just been published in the journal PNAS.

Trypanosomes are parasites of the mammalian bloodstream that rely on biting flies – like the tsetse fly — for transmission. They must constantly evade their hosts’ immune defences through waves of infections, while simultaneously prolonging the survival of their hosts, so as to ensure life-cycle completion and future transmission via other biting flies.

Neither vaccination nor prophylactic intervention is possible, and all current treatments have associated limitations that restrict their application. Although cases of human infection have declined recently these parasites still represent a major societal burden across 36 sub-Saharan countries that are within range of the tsetse fly vector.

According to Professor Nolan, “Camel herders have long known that the urine of camels infected with trypanosomes has a pungent odour, and is reddish brown in color. We found that this is directly attributable to parasite breakdown of aromatic amino acids, such as tryptophan, in the host, and to the excretion of the novel by-products into the bloodstream.”

“The advantage for the parasite of excreting indolepyruvate is that it modulates the inflammatory and immune responses of the host — especially at the peaks of infection. This prolongs host survival and thereby potentiates the transmission of the parasite to the tsetse fly, which ensures it can complete its life cycle.”

“We are hopeful that by solving the riddle of the putrid camel pee, these new insights have unearthed a potential target for anti-trypanosome therapies, which are badly needed as sleeping sickness continues to claim a huge number of lives in sub-Saharan Africa,” Nolan said.