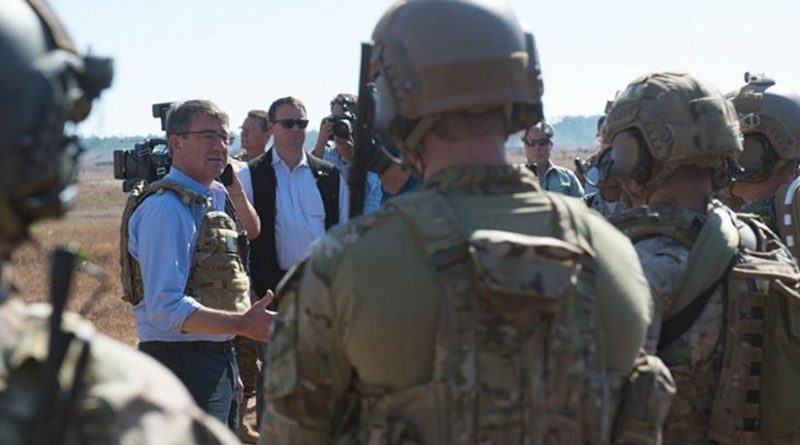 America’s special operations forces are a potent part of the “Force of the Future,” Defense Secretary Ash Carter told reporters Thursday in Florida.

Carter visited Hurlburt Field and Eglin Air Force Base as part of a four-day trip that also included stops in California and Texas. Both Florida installations are critical to national security, he said, adding that he’s grateful to the local communities for the support they provide to service members.

Carter noted that Hurlburt Field is home to some of the nation’s most elite warfighters.

“Very specifically, today we were looking at a number of the special operations forces’ assault capabilities,” he said. “This is a kind of capability that we use nearly every day, somewhere in the world.”

Carter said his most important responsibility as defense secretary “is to approve those operations, and obviously I do that with the greatest care, because there’s risk associated with them — but we do them with professionalism and skill unrivaled anywhere else in the world.”

Carter said special operators play a key role in the campaign against the Islamic State of Iraq and the Levant. He added that he is encouraged at “all the cities in Iraq and Syria that have already been seized from ISIL” and the envelopment of Mosul in Iraq and Raqqa in Syria “with motivated and capable local partners.”

“We will have a victory that sticks,” he said. “ … We’re obviously trying to accomplish that as quickly as possible, and the forces I was visiting with today are an essential part of that. … We’re working them very hard; their op-tempo is extremely hard. That is necessary, but it’s also difficult for them and their families.”

Carter said he wanted service members and their families “particularly to know that we were thinking of them … at this holiday time.”

Carter said Eglin is important as home to platforms like the F-35 Joint Strike Fighter and “the most lethal, the most precise” advanced munitions capabilities.

“That is one of the themes in our investments in both our 2017 budget and our 2018 budget,” he said. “It was important to see the progress that those programs are making, and they’re doing very well. But they’re absolutely necessary.”

The secretary responded strongly to a reporter’s question about the prospect of a continuing budget resolution.

Stop-gap funding under continuing resolutions is an inefficient use of taxpayer dollars and is unfair to troops, the secretary said.

“They deserve budget stability and the knowledge that Congress is supporting them with the funding that they need,” Carter said.

“There’s nothing good to say about the absence of a budget,” he said. “And the troops deserve better.”