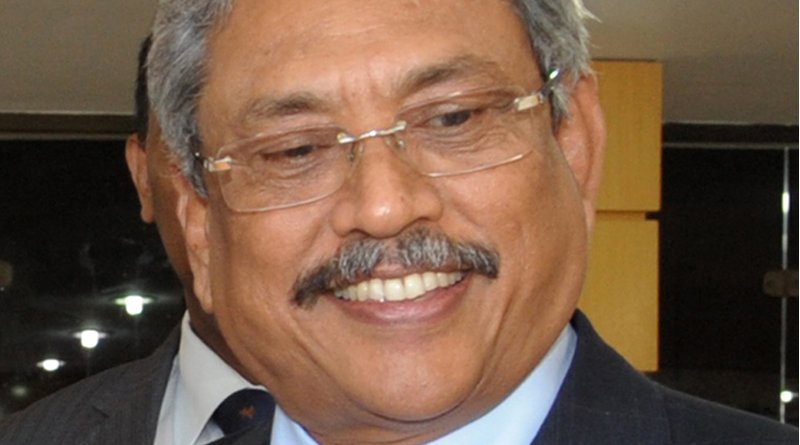 The emphatic win by former Defense Secretary Gotabaya Rajapaksa at the Presidential elections held in Sri Lanka on November 16 could herald in a new era for the strategically-placed South Asian island that could be modeled on the successful economic path of the Asian Tigers such as Singapore.

The electorate seemingly voted on ethnic lines with the Tamil and Muslim dominated areas in the north and east voting heavily for his challenger Sajit Premadasa, housing minister and son of former President Ranasinghe Premadasa, who was ironically assassinated by the LTTE (Liberation Tigers of Tamil Eelam) in 1993 and the Sinhala majority areas in the south voting solidly for Gotabaya, ensuring his victory with a large majority.

The majority Sinhalese and mainly Buddhist community that comprise 70 percent of the population have been alarmed by moves by the government led by President Sirisena and Prime Minister Wickremasinghe in the past 5 years to appease Tamils – driven by their expatriate populations who have taken asylum in the West – and  supported by some western governments, human rights agencies and the media, to divide the country. The attacks by Muslim extremists in April further added to their insecurity.

Gotabaya, is credited with having master-minded the successful military campaign to wipe out one of the most feared terrorist outfits in the world – the  LTTE – in 2009 and end a 30 year civil war. Thus, he is adored by most Sinhalese. He renounced his U.S. citizenship earlier this year, to qualify to contest the presidency. His campaign theme song had the lyrics that say a true patriot has come back to his homeland to serve the people.

In setting the stage for his presidential run, about two years ago he set up a movement called ‘Vyathmaga’ (Professionals for a Better Future) consisting of academics, professionals and entrepreneurs that promotes a development model very similar to Singapore’s. His inauguration speech hinted at such an approach to development.

Addressing the nation on November 18 after taking his oath of office at the iconic Ruwanveliseya Buddhist temple in the historic city of Anuradhapura, he pledged to protect the Sinhalese Buddhist heritage pointing out that this stupa epitomize this great civilization that was built over 2500 years ago.  He pointed out that though he invited the Tamils and Muslims during his election campaign to join hands with him to build a prosperous nation, judging from the voting they haven’t done so. But, he pledged to serve all people “even those who did not vote for me”.

Pointing to his election manifesto, he outlined the priorities of his administration to encourage professionalism and efficiency as the cornerstone. Pointing out that he did not respond to serious mudslinging against him during the campaign he said “ I will try to follow that attitude in running government, respecting the law, protecting social harmony, without indulging in abuse and dishonesty, but committed to moral values”.  He warned that corruption will not be tolerated under his administration, and he  will not hesitate to “use my executive powers to protect the nation”.

Sri Lankans have been deeply disappointed with the ‘yahapalanaya’ (good governance) regime that they voted into power in January 2015. They came to power to rid the government of corruption and abuse of power that they claimed was endemic under the regime of President Mahinda Rajapaksa, Gotabaya’s elder brother.

But, within six months they were embroiled in the biggest Central Bank scam in Sri Lanka attributed to a close ally of Wickremasinghe, who has since fled to Singapore. Lack of will to bring him to book has haunted the regime ever since, along with economic mismanagement and their subservience to the West in foreign relations.

However, during the Sirisena-Wickremasinghe regime, there have been marked improvements in democratic rights, freedom of the media and judiciary, due to a constitutional amendment moved by the government.

Making his farewell address to the nation immediately after the polls closed on November 16, President Sirisena claimed credit for it. “It is the responsibility of the newly elected President to further strengthen democracy and media freedom restored during my tenure in office,” he told the nation.

“During my tenure, full democracy and freedom were restored in the country. I believe I could ensure full media freedom and democracy to an extent never enjoyed by the people before. However, that media freedom and democracy restored later boomeranged with serious allegations, character assassinations and insults directed against me via social media. However, I was not demoralized by any such acts” Sirisena said.

Human rights organization, both in Sri Lanka and abroad, have accused the Rajapaksas of widespread human rights violations during their previous rule, especially between 2008 and 2015, which they have denied. However, Gotabaya’s promises made during his inaugural address, are in sharp contrast to these accusations.

Parliamentary elections are expected as soon as possible, and as expected, if his party SLPP (Sri Lanka Commonman’s Front) wins, Mahinda is expected to become Prime Minister. He is even a bigger hero to the Sinhalese people.

Former senior journalist and currently a freelance translator Janaka Perera told IDN that the Rajapakses would need to clean the ranks of the SLPP by the time parliamentary elections are held.

“The crooks and other dubious characters in the SLPP must be marginalized. Their past track record is all too familiar,” he noted, adding, “I do not mind a bit of  authoritarian rule, provided there is least corruption and the country is clean, disciplined and peoples’ basic needs are effectively met”.

The Island newspaper in an editorial on Monday welcoming Gotabaya’s win, noted that he conducted himself admirably in a business-like manner in not responding to mudslinging in the final phase of the election campaign.

“His approach was a breath of fresh air in our electoral politics vitiated by effrontery, name-calling, etc. Thus, he endeared himself to the voters who are fed up with the present state of affairs,” said the Island hailing November 16 election as a “victory for Sri Lankan democracy, in that it was free and fair, and above all, peaceful”.

In his speech after the formal announcement of the results by the Election Commission, Premadasa acknowledged the same and appealed to Gotabaya to uphold these gains.

“We have just witnessed the most peaceful presidential election in the history of our independent republic. This was a result of the democratic gains and institutional reforms that have taken place over the last five years, that empowered an independent elections commission and restored the rule of law,” noted Premadasa.

He added: “My appeal to the incoming President is that he take this process forward and strengthen and protect the democratic institutions and values that enabled this peaceful election.”