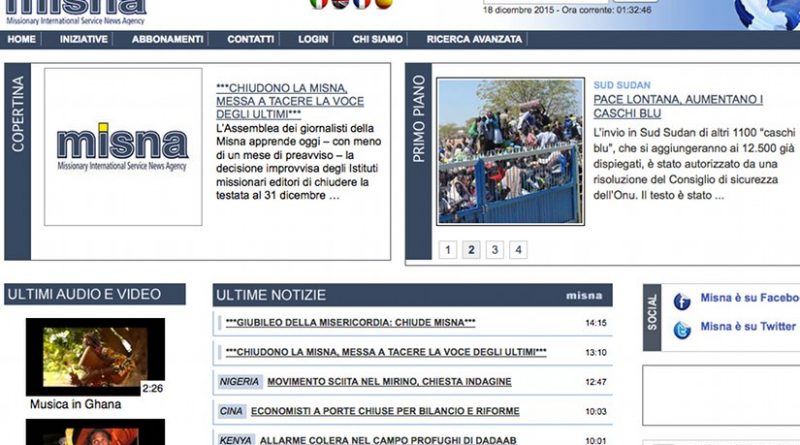 The Assembly of MISNA journalists learns today – with less than a month notice – of the sudden decision of the editors, the Missionary Institutes, to shut down the news service as of 31 December 2015. The staff, collaborators and translators are outraged over such a serious mistake, made in such a very delicate moment for information from and for the World’s South. The staff strongly calls on the editors to assume their responsibilities toward a news agency that for 18 years has reported and told the realities of the “outskirts” of the world, not only geographic, and so dear to Pope Francis.

The journalists firmly disapprove of the lack of concrete proposals from the editor, as also its rejection of the staff’s availability to consider solutions to the crisis through available social incentives. This, in addition to other signs, confirms the complete lack of will that reflects an even deeper and more serious crisis, because dependent on ideals and motivations.

It is also impossible to ignore blatant errors that progressively undermined the editorial future of the agency. From the misconceived evaluation of a market in evolution to the sluggishness in intervening in the budget sector, always and however in absence of any kind of dialogue requested repeatedly by the staff.

To add to these grave responsibilities and questionable vision, a crisis is now in particular hitting the Catholic publishing industry, sweeping away small ‘non-aligned’ realities – magazines, newspapers and radios – dedicated to giving voice to people and contexts otherwise marginalized in the mass media.

In a stand against this increasingly concrete prospect also for us, we call for all to join us in urging the editor to take every possible measure to save the ‘voice of the voiceless’ that risks being silenced.

Home » MISNA Being Shut Down: Voice Of The Voiceless To Be Silenced – Statement