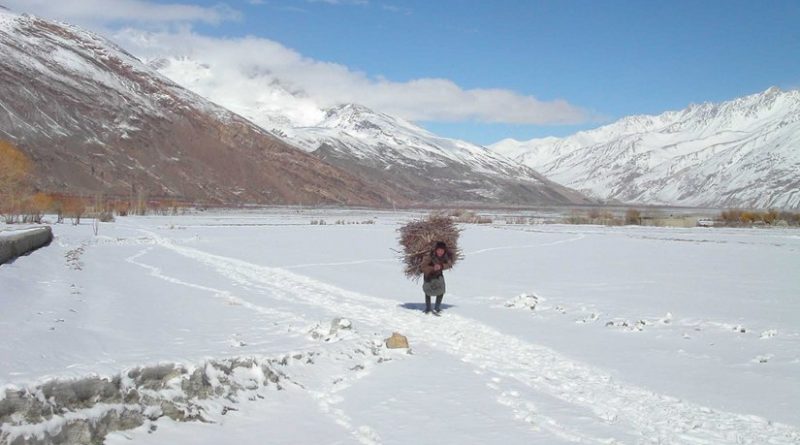 A product of an 1894 treaty to separate the Russian Empire from British India, the Wakhan Corridor is a thin panhandle in North Afghanistan. The Emirs of Badakhshan once leveraged on the region’s control over mountain passes on the Silk Road to China to build a wealthy domain extending as far as Kashgar. Today the border to China is closed, the tracks are desolate, and only sheep roam where rich caravans once plied. Yet, if challenges can be overcome through bilateral cooperation, this ancient trading route may provide old advantages and new opportunities for both China and Afghanistan

Reopening the Wakhan seems increasingly viable in these exciting times for intra-regional trade; the impending lift of Iranian sanctions; growing convergence between Russia, China and Pakistan, together with India’s Connect Central Asia Policy precipitates a shift in economic attention to the region. China’s One Belt One Read (OBOR) development plan, convergent with President Ashraf Ghani’s transit country proposal and Pakistan’s new found emphasis on Gwadar Port, could lead to the integration of Afghanistan into a cohesive economic area bridging the maritime and land routes of the Silk Road. In 1991, intra-Central Asia trade accounted for 20 percent of all trade in the region; today, due to the disintegration of joint production processes, that figure has shrunk to 3.5 percent. Reinvigorating intra-regional trade with access to Chinese inputs would be an efficient strategy to restore productive capacity for value-added manufacturing in a region now characterised by primary exports.

Its proximity to the Karakoram Highway (KKH) would see the Wakhan connected to the US$46 billion China-Pakistan Economic Corridor (CPEC), a massive mesh of Chinese infrastructure investment designed to transform the region into a strategic energy nexus through pipelines, power grids and railways. This provides not only a market for Afghan oil and energy products, but provides electricity imports to a country where, according to the World Bank only 43 percent of the population has reliable power grid access. Most importantly, Wakhan offers a route bypassing Pakistan and reducing Afghan dependency on a neighbour it barely trusts which accounts for a third of all trade, a much-needed boon considering Afghanistan’s perennial trade deficit, currently valued at 37.4 percent of GDP.

For China, Afghanistan itself boasts bountiful resources of rare minerals and oil, which the Chinese have demonstrated a keen interest in by signing oil contracts in Faryab and Sar-e-Pul and by purchasing the MesAynak mining lease for US$4.4 billion in 2009, which remains the single largest investment to Afghanistan to date. Afghanistan’s central position allows China to link up with various infrastructure projects in the region, including the Turkmenistan-Afghanistan-Pakistan-India (TAPI) natural gas pipeline, the Central Asia-South Asia Electricity Transmission Project (CASA-1000) and the Asian Development Bank’s Afghan Ring Road Initiative (see Figure 1). Fostering regional economic interdependency increases the attractiveness of China’s own Silk Road Economic Belt project, while prosperity will lead to stability in Afghanistan and surrounding polities.

With 2.6 million tons of trade in 2014, China’s existing trade with Central Asia through the well-established Alashankou port-of-entry with Kazakhstan is booming , while trade with South Asia through the Karakoram Highway (KKH) is poised to take off. Compared to these, the Wakhan offers China the opportunity to bridge South and Central Asia, profiting from the streamlined production networks that lower the barriers to trade and result in a coherent economic region, under Chinese leadership.

On a grander platform, with all roads leading to Beijing, China will gain a major boost in its endeavour in the New Great Game for the Central Asian Republics. Energy, oil and trade nexuses concentrated to the East will leave China’s greatest adversaries in the New Great Game excluded and frustrated. Afghanistan is the final key for China to completely encircle India, allowing Central Asia unimpeded trade southwards to Pakistan’s Port of Gwadar on the Arabian Sea. The completion of the OBOR project with Afghanistan as a crucial linchpin would likely see the cost and barriers of trade from Central Asia to China decrease relative to excluded, peripheral countries like the USA and Japan, who are also conveniently China’s rivals. In one bold stroke, China has the capability to take victory in the New Great Game.

Nonetheless, the current infrastructure situation in the Wakhan makes all these opportunities moot. From Fayzabad, the largest city in Badakhshan, primary earth roads vulnerable to inclement weather run 160km as far as Ishkashim, while 190 kilometres of dirt tracks provide access up to the village of Sarhad. From there, no roads exist until the Chinese border 100 kilometres away, where the closest major city of Tashkurgan connects to the Karakoram Highway (see Figure 2). A loaded truck from Fayzabad would take 19 hours to travel just 160 kilmetres to Ishkashim, and there would be no means to get it any further. As a result, trade has remained non-existent since the border was closed in 1949.

In a bid to ease the military logistics situation and encourage commerce, both American and Afghan authorities have issued requests to open the border in 2009. Since then, in response to an appeal by the Afghan ambassador in 2013, China has only pledged a feasibility study. Yet, a preliminary proposal made at the Pak-Afghan Joint Economic Commission meeting in November 2015 suggests that countries in the region may be moving to resolve outstanding challenges.

Despite key cultural differences, China has remained consistent in its stand of keeping the border closed in order to limit influences from Afghanistan on domestic Uyghur religious-nationalistic terrorism and other socio-political implications. Once considered insurgent-free, Badakhshan Province has seen increasing spates of Taliban and ISIS activity.Notwithstanding the Badakhshan Massacre in 2010, August 2015 saw the Islamic State conduct a suicide attack and July 2015 saw the Taliban overrun a joint military base. In September 2015, the Taliban captured swathes of Raghestan district. These incidents continue to threaten the security of any passage through the Wakhan Corridor. Nonetheless, as the province and the Wakhan in particular are still among the safest regions in the entire country, the chief security threat will likely be opium smuggling. Badakhshan experienced a 77 percent increase in opium cultivation from 2013-2014, making it a major opium nexus on the Golden Crescent, and Tashkurgan’s rich water resources coupled with China’s may make it a convenient heroin production area. Enforcing anti-smuggling measures in the remote region may prove to be an exercise in fruition, and China’s 20% rise in drug abuse rates from 2013 to 2014 means 0.3 percent of the population are now registered drug offenders, no doubt already a headache for Beijing.

Considering China’s infrastructure building track record, constructing the road will not be an unsurmountable challenge. However, low human development will remain an endemic problem to providing the logistics support required to sustain the route. Civilisation in the Wakhan consists of 10,000 people living in tiny Wakhi villages or among Kyrgyz shepherding tribes, hence running water, electricity and even food supplies will need to be built from scratch. Landslides, avalanches and rockfalls threaten to obstruct the pass, while the 2015 Hindu Kush earthquake with its epicentre near the Wakhanis a reminder of the risks associated with mountainous infrastructure construction.

To overcome these challenges, partnership must extend beyond inter-governmental cooperation. Well-established and experienced organisations like the Aga Khan Foundation should be courted to spearhead and buttress Chinese and Afghan efforts to secure the region. In-depth anthropological understanding of regional demographics can also go a long way towards harmonising the region and pulling it out of its isolation. Building a socially stable region will be a long, complex process, requiring the education of the population bereft of education and the provision of public and private investment to build access to services and food security. Funding for such infrastructure could come from the nascent Asia Infrastructure Investment Bank (AIIB), from the ADB, or even from the China Export-Import Bank with its stunning track record in African infrastructure investment.

Recent developments suggest that China is committing to improving security on the border: a newly built road leads up to 10kilometres from the border on the Chinese side (shown in pink in Figure 2), a supply depot operational since 2009 provides logistics support to border guards, and a mobile communications center provides optical cables for internet connection to the remote region. Tashkurgan’s company-sized county garrison provides first-level security. However, it would be naïve to expect the overstretched Afghan military to provide anything like Pakistan’s 12,000 man Special Security Division for the Karakoram Highway. Instead, a softer approach seems to be the key. China has excellent relations with the Taliban, having hosted direct Afghan-Taliban talks in July 2015, with a second round expected in December 2015. In January 2015, Taliban spokesman Zabihullah Mujahid even made a visit to China to ‘enhance ties and making (sic) relationships’ between the two countries. This alongside a general ambivalent mood towards Chinese people among Afghans may go a long way towards defusing security tensions.

As part of the Xinjiang Work Conference, the city of Tashkurgan has been paired with Shenzhen, granting it 0.5% of the annual budget of the thriving metropolis of 10.6 million people, alongside human resource and technological assistance. This money has gone to the creation of a 100 million RMB Border Trade Zone intended to boost trade and tourism, with plans to boost the transport infrastructure through rail connections, upgraded highways and even an airport. Private investment reached US$15 million in 2009, including a mineral water plant by Spring Capital Hong Kong. While these investments are designed primarily to support the KKH on the Khunjerab Pass to Pakistan, Tashkurgan’s development as a regional trading hub would provide China with the infrastructural capital required to push towards the Wakhan.

Sceptics would be wise to remember that developing the Wakhan Corridor, while ambitious, is the resurrection ofan ancient, tried and proven trade route. A successful project in the Wakhan will be far more than an economic measure; it will simultaneously be a domestic and foreign confidence-building mechanism, a geostrategic manoeuvre to outflank both America and India, and a stabilising force in the region. China has done nothing for the Wakhan thus far, but it is for these reasons that China is right to exercise patience and caution to ensure the project fulfils its maximum potential.

*Boh Ze Kai is a project intern with Mantraya and is a lead researcher in Mantraya’s Borderlands project.

Home » Road To The Dragon: Overcoming Challenges To The Wakhan Corridor – Analysis

One thought on “Road To The Dragon: Overcoming Challenges To The Wakhan Corridor – Analysis”