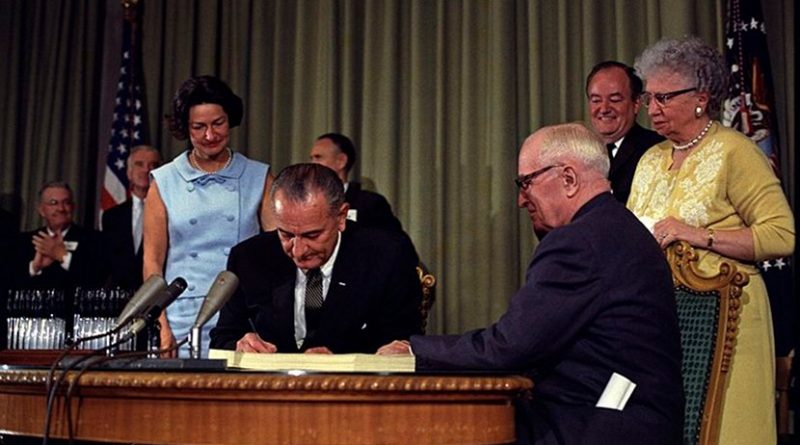 In July of 1965, President Lyndon Johnson was done kidding around. Fresh off the campaign trail, LBJ was basking in the glory of his recent presidential victory, having obliterated Republican Senator Barry Goldwater by a historic margin just a few months before. Sweeping both Houses of Congress, the crude Texan had finally gotten the partners in government he’d been searching for. Johnson had the momentum, and the Republicans were sadly mistaken if they thought he was going to squander it on a few mundane infrastructure maintenance projects.

Johnson was an imperialist in the most forceful sense of the word, an idealist who’s distinctly rural personality complemented the extravagance of his ideas and goals. From the outset, Johnson was determined to enact a series of reforms that he envisioned as a second New Deal. His talent had won him the number two spot on the democratic ticket in 1960, but his unabashed ambition alienated many prominent members of his party, most notably former Attorney General Robert Kennedy. Yet through shared aspirations, it also united the rising liberal coalition around his leadership. For the first time in the decades-long struggle between the conservative and liberal wings of the party, the latter held the upper hand, giving them immense power over the direction of the DNC.

Johnson, as much as he tried, could never emulate the persistent charm of his slain predecessor, a fact made all too clear to him by progressives who were reluctant to trust him. So Johnson elected to show them his strengths through more than just talk. In a matter of months after his election, he passed the most aggressive and sweeping liberal reforms in the history of the United States. A change was at hand, and it was colored dark blue.

But it’s important to not let the significance of his victory overshadow the real threats that once vowed to oppose it. Holdover Dixiecrats may have been outsiders in the party of Johnson, but they clutched to their power with renewed energy in the face of extinction, guarding it with a selfish piety. Most of them hailed below the Mason-Dixon, claiming solid holds on districts that practically operated with a one-party system, designed to consolidate power for their political overlords. But 1964 proved to be the beginning of the end for that antebellum dynasty.

Although Johnson’s electoral fortunes had energized Democrats across the country, southerners weren’t so receptive. While usually reliably Democratic country, the south had been put off in recent years by President Kennedy’s push for a Civil Rights Act. So while Democrats might have scored big in 64’ nationally, they did so while being deserted by the one group that had consistently supported them since the age of Lincoln. Democrats failed to carry a single county in Alabama or Mississippi that year, where they had trounced Republicans just four years earlier with the help of independent candidate Harry F. Byrd.

This was the peril of a southern democrat; at the time, America’s most politically endangered species. Abandoned by their counterparts, shunned by the opposition, and bordering on traitorous in the eyes of a nation. So realistically speaking, these developments weren’t the worst of Congressman Wilbur Mills’s problems, but surely, they were near the top of the list.

A Dixiecrat from Arkansas who chaired the powerful Ways and Means Committee, Mills managed to survive his re-election with the help of liberals like Johnson, but everyone in Washington knew better than to see this as proof of an improved relationship between the two. For two years now, Mills had consistently blocked dozens of Johnson’s Great Society projects from going through his committee. The election added two new liberal democrats as well as a pro-medical care Republican, effectively deciding the fate of the chamber. Now, outnumbered by liberals from his own party, Mills had no choice but to concede the inevitable. The first order of business? A little-known government insurance program that needed approval for a vote, otherwise known as Medicare.

Medicare wasn’t anything new to America, at least theoretically. Progressives had been chasing some sort of national healthcare system since Theodore Roosevelt, and while it was eventually manifested through the Affordable Care Act, the steps that were taken on the path to that day in March of 2010 can be traced back to the early 1950s; oddly enough, under a Republican President.

Dwight D. Eisenhower might have filled his cabinet with businessmen, thundered down judgment on government overreach, condemned the New Deal, and accused his predecessor of being a neo-socialist; but when it came down to it, the Kansas native was a soldier, and that always trumped his ideology no matter the circumstance. He entered the White House riding a wave of conservatism built on the ideas of small-government, privatization, and economic freedom. But that didn’t stop him from lobbying Congress to create a federally funded government welfare program aimed at providing free healthcare for U.S. veterans and their families.

While the purpose of such a program was partially to stimulate the meager ranks of the post-World War army, many small-government fiscal conservatives in both the House and Senate expressed their disinterest in pursuing such a political paradox that the program would assuredly create. Undoubtedly, the conservative medical lobbying group known as The American Hospital Association spoke for all of their Republican supporters in Congress when they ardently declared in a news communique that such a program would lead to “socialized medicine without necessity of specific legislation for it” In their mind, the limited support that veterans received was sufficiently supplemented by charitable organizations, which simply wasn’t true.

In 1952, Defense Department officials reported that out of the 200,000 expected births that would happen in military households, only about 75,000 would be covered by limited government resources. Furthermore, the Red Cross had informed the government that it could only provide about 10,000 military families in the same predicament with maternal assistance. The rest, sadly, would be fending for themselves squeezing every last penny out of very modest military salaries.

Despite the evidence, Republicans and the AMA succeeded in blocking the legislation for many years. President Eisenhower, being all too familiar with the struggle military families face in times of service, proved a persistent advocate for the program. Three separate times, the man who had liberated Normandy took to Congress to demand the bill get the attention it deserved. Finally, in early 1956, Rep. Carl Vinson, a Georgia Democrat, adhered to the President’s call for action and proposed the Dependents’ Medical Care Act.

“Today it is estimated that only about 60 percent of the dependents of our servicemen have medical care available to them in military facilities. The remaining 40 percent must shift for themselves.” Under the bill, “the medical facilities of the uniformed services would continue the present practice of providing medical care to dependents…. In addition, and this is the important new feature of the bill, provision is also made for supplementing and augmenting this program through the use of civilian medical facilities.” The senior congressman declared in the chamber.

Labeled a “very liberal bill” by the Kilday Subcommittee, it finally passed both houses of Congress with a few changes and was signed by a proud President Eisenhower in June.

Mill eventually withdrew his opposition to Johnson’s bill but quickly realized the scale that the program would amass in federal funds. With the intent of satisfying the fiscalist that lay at his core, the crafty congressman knew he couldn’t contain the damage from outside the negotiating room. His position as chairman ensured that he’d be involved somehow, and he was determined that if he couldn’t stop Medicare, he was going to limit its prowess.

Over the course of the next couple of months, conservative Democrats and Republicans alike began proposing competing versions of a Medicare-like program. Some were genuine attempts at improved, others an obvious ploy at dividing the vote. Eventually, Mills and fellow lawmaker Wilbur Cohen came to a suitable compromise that combined three of the largest competing versions.

The fact that it suited a small-government conservative politician like Mills tells you how much the congressional liberals liked it. Still, the road to history is paved with sacrifice. A Medicare proposal passed the House 313-215 on April 8th. After passing the Senate, Johnson enacted Medicare and her sister program, Medicaid, on July 30th. The historical bill signing took place in Independence Missouri, with a proud former President Harry S. Truman looking on.

Born out of compromise and ambition, America’s grand experiment with government healthcare began. Its conception was anything but pure, and its infancy anything but fair. However, the tenacity of its proponents and the irrefutable success of the program over time secured it a permanent spot on the national political stage, for better or worse. However it’s done more than just survive, it’s changed us in ways we still truly haven’t grasped.

Today, over 55 million Americans rely on Medicare to cover their medical needs, making it the biggest insurance provider in the United States. It’s been well over 50 years since the program’s inception, and it still plays a powerful role in our political system at both the local and state level. In fact, in some ways, it’s more prevalent of an issue today than it was when Lyndon Johnson sat in the Oval Office, as the ‘Medicare for All’ movement led by Sen. Bernie Sanders (I-VT) has clearly shown. The partisanship that to this day surrounds these staples of American government breeds inaccuracy from Washington to San Diego, in both parties and all walks of life.

Americans have a tendency to regard historical monuments of the past to be excluded as a species from another lifetime. We are perpetually blinded by the cynicism of our leaders to the history being made right in front of us.

We can debate the scope and power of these types of programs, healthy change begins with genuine self-analysis. But to look upon Medicare from a human perspective is to look upon the institutionalization of kindness in modern governance. To realize that the welfare of the people will always be more important than stuffy philosophy. That an ideology which leaves the most vulnerable helpless has no place in a government by the people. It’s to value every citizen from every walk of life; something which we all can believe in.

Home » The Story Of Medicare – OpEd