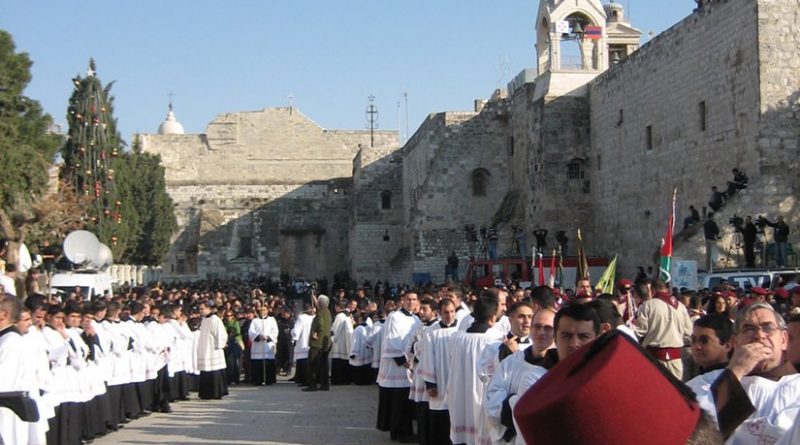 As Christmas approaches, the last thing likely to be on the minds of mainstream Christians in the West will be their fellow Christians who are suffering as a result of Israel’s apartheid policies.

This is tragic and exposes the flaws that exist today. What I mean is that Christians in the West live their lives oblivious to the continued suffering of the Christians who live either inside Israel as marginalized half-citizens, denied their equal rights, or try to survive under Israel’s harsh and brutal occupation in Jerusalem or the West Bank or under siege in the Gaza Strip.

There are an estimated 1,200 Christian Palestinians living in the Gaza Strip — which is known as the world’s largest outdoor prison — and they suffer equally with their 1.8 million Muslim neighbors. Haaretz, the liberal English language newspaper in Israel, reported this week that 951 of Gaza’s Christians have asked to be allowed to visit family members and attend Christmas Mass in the West Bank or Jerusalem this year, but Israel’s racist government has blocked them from traveling. Israel allows other Christians from around the world to travel to Bethlehem, but not those who have struggled to preserve the true voice of Christianity in the place where it was born.

If you wanted to knock the wind out of the dying Christian population in the Middle East, Israel’s refusal to allow them to leave Gaza to celebrate one of their religion’s most important festivals would be a good place to start.

While the Christians of the West sing hymns about the birth of Christianity 2,000 years ago and worship Jerusalem and Bethlehem as the source of their beliefs, Arab Christians are actually still trying to survive in those cities, both of which are under intense pressure to protect their deep Christian roots.

Israel claims — in its multimillion-dollar public relations campaign to control the busy minds of the West and especially the US — that Christians are better protected by Israel than they are in the Arab world, where they face daunting challenges to be fully accepted as equal partners with Muslims. They may be treated well but they are far from being equal, and they suffer as intensely from Israel’s brutality as Muslims do.

I have argued many times that the path to respect in America for Arab and Palestinian rights is through the US Christian community. But some Muslim activists only seem to pay lip service to Arab Christians and instead insist that Christians like me stop bringing these issues up. “Christians and Muslims are the same,” we hear Arab Muslim activists repeat over and over again. But Christian Arabs like me rarely see that camaraderie. It doesn’t exist outside of empty rhetoric.

But the failure of the Muslim world to make Christian Arabs fully equal doesn’t let Israel off the hook. However, Israel better recognizes how powerfully symbolic Arab Christians are, so it is waging an all-out PR war to convince Christians in the West that Israelis care more about Christians than the Arabs do.

Sadly, when we talk about the Middle East’s Christians, we speak about their diminishing numbers. Christian Arabs in the Middle East are vanishing. They are being pushed out by Israeli racism and the Arab world’s apathy.

Christian Arabs consist of many denominations: Maronite Catholics who are mostly Lebanese, Coptic Christians mainly thriving in Egypt, plus Protestants, Melkites and Orthodox. They are split on the most important of Christian holidays, with mainstream American Christians celebrating the birth of Jesus on Dec. 25, while many Arab Christians will mark Christmas on Jan. 7, 2020.

American Christians, in particular, have abandoned the Arab Christians who have been surviving — barely — in the Middle East since the religion was founded in the Holy Land 2,000 years ago.

The Arab and Muslim worlds should view Arab Christians as a secret weapon; one that, if used strategically, could turn the tide of public opinion against Israel and further empower their cause. Instead of using Christmas greetings to impress the West, especially American Christians, they should focus their attention on empowering the Arab Christians who live right under their noses.

Home » Arab Christians Easily Forgotten By Those In The West – OpEd