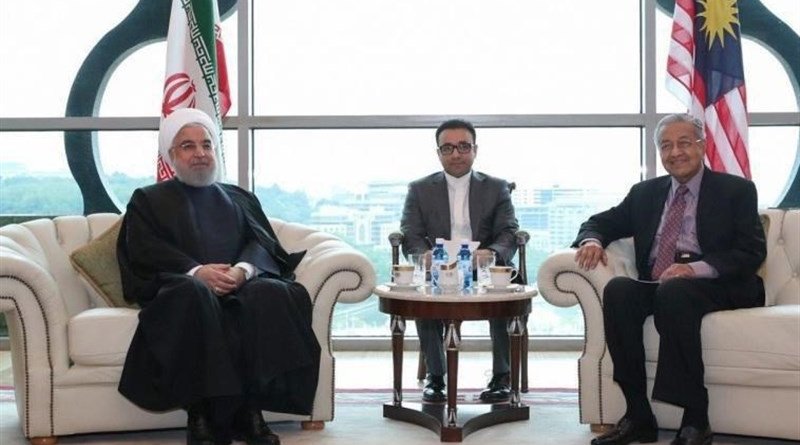 Prime Minister of Malaysia Mahathir Bin Mohamad expressed his country’s determination to continue economic and trade relations with Iran in defiance of the “illegal” sanctions against Tehran.

In a meeting with Iranian President Hassan Rouhani on the sidelines of the KL Summit 2019, which kicked off in Kuala Lumpur on Wednesday, Mahathir Bin Mohamad called for the expansion of ties with Iran in various fields.

Malaysia supports Iranians and is resolved to promote trade cooperation with the Islamic Republic, the Malaysian leader added.

Condemning the “illegal” sanctions imposed on Iran in violation of the UN regulations, he said efforts are underway to give a boost to the trade ties with Iran.

Iran is making progress despite pressures from the US and Europe, Mahathir Bin Mohamad said, adding that his country needs to learn from Iran’s experience of combating foreign pressures.

He also described the KL Summit as an opportunity for Muslim nations to share experiences.

For his part, Rouhani said the world Muslims are members of a single family that should behave responsibly towards each other.

“It is necessary for Muslim countries to cooperate in countering the pressure of big powers,” he said.

Denouncing the US move to intensify “cruel and unilateral” sanctions on Iran over the past two years, the president said the sanctions have been imposed in violation of the UN Security Council Resolution 2231 after the US withdrawal from the 2015 nuclear deal.

The Iranian president also called for efforts to enhance the relations between Tehran and Kuala Lumpur in various fields, such as energy, industry, tourism, maritime cooperation, and information technology.

The foreign sanctions would not undermine Iran’s determination to broaden cooperation with Malaysia, he underscored.

Rouhani also stressed the need for efforts to address the problems of Iranian expatriates in Malaysia and to hold a meeting of Iran-Malaysia Joint Commission on Economic Cooperation.

The Iranian president is in Malaysia to attend the Kuala Lumpur Summit 2019, attended by around 250 leaders, politicians, and thinkers from 52 countries.

After attending the KL Summit, Rouhani will pay a visit to Japan at the invitation of Japanese Prime Minister Abe Shinzo.