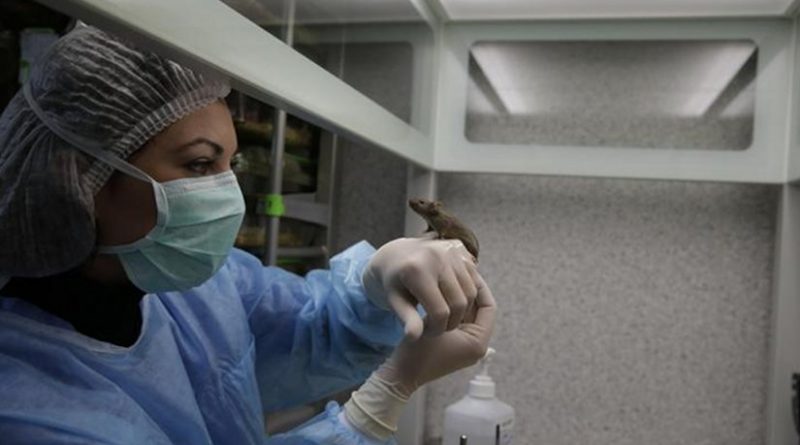 A genetically-modified mouse participated in the experiment. Credit: The A.N. Belozersky Institute Of Physico-Chemical Biology

A team of scientists are reporting that they have been able to slow down aging.

A group of Russian and Swedish scientists just published a breakthrough paper, reporting results of a joint study by Lomonosov Moscow State University and Stockholm university. The article was published in the US journal Aging.

The major goal of the study was to investigate the role of intracellular powerstations — mitochondria — in the process of aging of organism.

Importantly, scientists made an attempt to slow down aging using a novel compound: artificial antioxidant SkQ1 precisely targeted into mitochondria. This compound was developed in the Moscow State University by the most cited Russian biologist professor Vladimir Skulachev.

Experiments involved a special strain of genetically-modified mice created and characterized in Sweden. A single mutation was introduced into genome of these mice resulting in the substantially accelerated mutagenesis in mitochondria. This leads to accelerated ageing and early death of the mutant mice. They live less than 1 year (normal mouse lives more than 2 years). The mutation promotes development of many age-related defects and diseases indicating that the major defect of these mice is indeed ageing.

Starting from the age of 100 days one group of mutant mice was treated with small doses of SkQ1 (approx. 12 micrograms) added into their drinking water. Per scientists’ hypothesis, the compound must protect animal cells from the toxic byproducts of mitochondria — free radicals (reactive oxygen species). Another group of animals served as a control group receiving pure water.

Differences between the two groups became obvious starting from the age 200-250 days. Animals in the control group aged rapidly as expected. They were losing weight, their body temperature decreased, severe curvature of the spine (as a result of osteoporosis) and alopecia were developing, their skin became thinner, and in case of females estrus cycle was impaired. Finally their mobility and oxygen consumption were decreased. The development of all these typical traits of ageing was dramatically decelerated in the group treated with SkQ1. Some of the ageing traits did not appear in that group at all.

Professor Vladimir Skulachev, the creator of SkQ1 molecule design and co-author of this study, said, “This work is quite valuable from both theoretical and practical points of view. First, it clearly demonstrates the key role of mitochondrially produced reactive oxygen species in the process of ageing of mammals. At the same time our study opens the way to the treatment of ageing with mitochondrially targeted antioxidants. We are also very honored to cooperate within this project with such prominent Swedish scientists as prof. Barbara Cannon who has such title as the President of Royal Swedish Academy of Sciences in her CV and prof. Jan Nedergaard, Head of Wenner-Gren institute”.

Prof. Skulachev’s project is now developing a set of pharmaceuticals based on SkQ1 molecule. The first drug — Visomitin eye drops — is already approved and marketed in Russia, it also passed phase 2 clinical trials in US. The next pharmaceutical product in project’s pipeline is an oral form of SkQ1 (similar to the one used in the aforementioned experiments). It is now in the process of clinical trials in Russia. In case of positive results of these trials, such “anti-ageing” drug can be approved for systemic indications in 2-3 years.