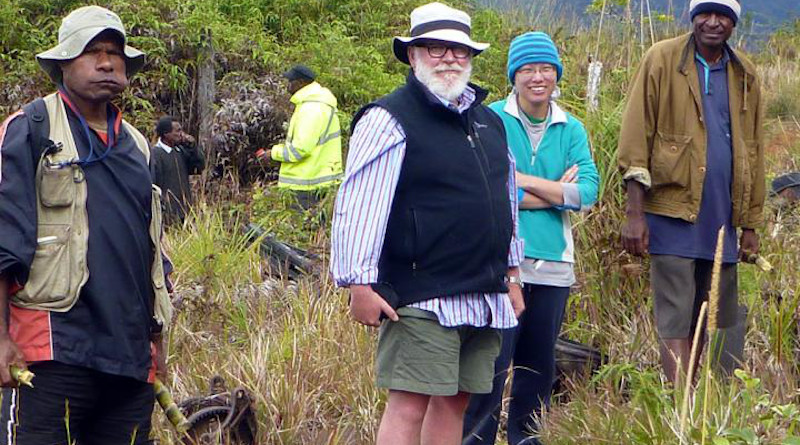 A new report published in Science Advances on the emergence of agriculture in highland Papua New Guinea shows advancements often associated with a later Neolithic period occurred about 1000 years’ earlier than previously thought.

University of Otago Archaeology Programme Professor and report co-author Glenn Summerhayes says findings in Emergence of a Neolithic in highland New Guinea by 5000 to 4000 years ago, provide insights into when and how the highlands were first occupied; the role of economic plants in this process; the development of trade routes which led to the translocation of plants and technologies; and an associated record of landscape, environment and climate change through time.

The report details the earliest figurative stone carving and formally manufactured pestles in Oceania, dating to 5050 to 4200 years ago, which were found at a dig site in Waim. Also found were the earliest planilateral axe-adzes uncovered in New Guinea to date, and the first evidence for fibrecraft and interisland obsidian transfer from neighbouring islands over distances of at least 800km.

“The new evidence from Waim fills a critical gap in our understanding of the social changes and technological innovations that have contributed to the developing cultural diversity in New Guinea,” Professor Summerhayes says.

The combination of symbolic social systems, complex technologies, and highland agricultural intensification supports an independent emergence of a Neolithic around 1000 years before the arrival of Neolithic migrants, the Lapita, from Southeast Asia. When considered together with a growing corpus of studies indicating expansion and intensification of agricultural practices, these combined cultural elements represent the development of a regionally distinct Neolithic.

The research establishes dating for other finds at the site, including a fire lighting tool, postholes, and a fibrecraft tool with ochre, possibly used for colouring string fibre.

The report suggests increased population pressure on the uneven distribution of natural resources likely drove this process, which is further inferred by language and genetic divergence.

The project arose out of an Australian Research Council Grant awarded to Dr Judith Field (University of New South Wales) and Professor Summerhayes.

“Former Otago postgraduate student Dr Ben Shaw was employed as postdoctoral fellow to do the “leg work in the field” and Dr Anne Ford (Otago Archaeology Programme) contributed to understandings of the stone tool technologies. As it worked out many of these rich discoveries were made by Dr Shaw. It was one of the best appointments Dr Field and I have ever made. I am proud of our Otago graduates who are some of the best in the world.”

Professor Summerhayes and his team had previously completed a Marsden funded project in the Ivane Valley of Papua, establishing the beginning of human occupation at 50,000 years ago. The results of this work were published in Science in 2010.

“This project is a follow-on where we wanted to construct a chronology of human presence in the Simbai/Kaironk Valley of Papua New Guinea by systematic archaeological survey with subsequent excavation and analysis of a select number of sites.

“This work tracks long-term patterns of settlement history, resource use and trade, and establishes an environmental context for these developments by compiling vegetation histories, with particular attention paid to fire histories, indicators of landscape disturbance and markers of climate variability. This will add to understandings of peoples’ impact on the environment.”

Professor Summerhayes received a Marsden grant in late 2019 for his project “Crossing the divide from Asia to the Pacific: Understanding Austronesian colonisation gateways into the Pacific”. This will involve work in the Ramu Valley, which was once part of an inland sea, and will tie in the developments of Highland New Guinea, with the movements of Austronesian speakers into the Pacific.