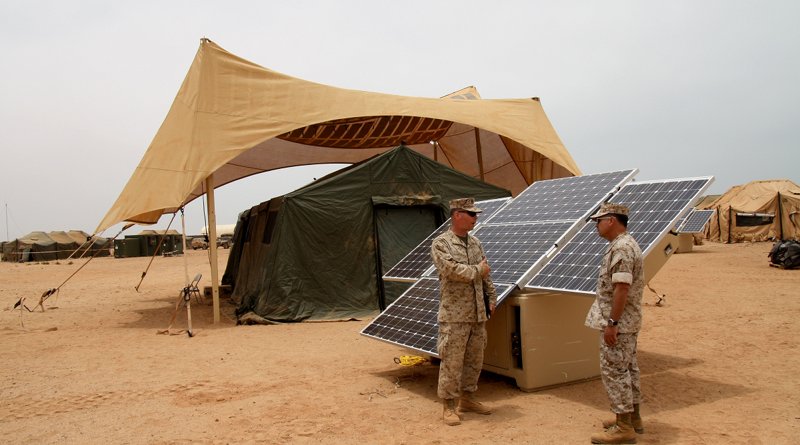 The world is on the cusp of energy transition, and the military innovates with energy efficiency, technology and renewables.

As the world demands more energy, nations face the often-competing pressures to increase energy access and affordability, protect the environment, and assure energy security.  The military, long focused on energy issues related to mission delivery, has often been at the forefront of technological innovation and deployment. The quiet innovations in the defense sector could help solve energy challenges nations confront today.

In energy policy circles, the conventional concept of energy security relates to economic prosperity and social harmony. In a globalized energy market, energy policies are designed to reduce the economic impacts of supply and price shocks through efficiency, diversified supplies, and fuel choice. In military energy decision-making, however, “security” focuses on achieving strategic objectives, and enables nearly everything the military does. In the defense domain, energy has the potential to be both an enabler of hard power but also a weapon of war via denial and willful coercion.

Energy has played a role in every facet of war. Many of the lessons learned during the world wars of the 20th century are still being appreciated and relearned in today’s conflicts. One of the most famous examples of energy influencing military strategy comes from 1911, when Winston Churchill, then First Lord of the Admiralty, converted the British fleet from Welsh coal to foreign oil. The gain in speed and decrease in logistical burden gave the British Royal Navy a critical advantage over the Axis powers. The policy brought further advantage as oil’s less smoky combustion allowed the Royal Navy to avoid coal’s telltale plumes  that revealed a fleet’s position.

As militaries shifted toward oil during the early 20th century as the main energy source, a scramble to secure oil supplies influenced events leading to and throughout WWII. Some of the greatest strategic decisions in World War II had their roots in a desire to access energy resources. The German military’s perceived need for oil created a two-front war, and its failure to take and hold Soviet oilfields spelled disaster at Stalingrad. The Japanese surprised the American naval fleet on December 7, 1941, an attempt to secure oil-shipping lanes and secure other natural resources, such as rubber, from Southeast Asia. Energy’s link to World War II conflict had as much to do with denial of resources to the enemy as securing one’s own oil supply chains. The stalling of General Patton’s Third Army following its campaign across France in summer 1944 is a telling example of fuel acting as “tether” to military operations.

The skill and technologies of logistics forces in providing fuel has grown significantly since World War II. Energy security has been a challenge in Afghanistan, NATO’s largest operation. In late 2012, more than 100,000 troops consumed more than 6.8 million liters of fuel per day, 99 percent delivered by truck, from Pakistan and later through a complex Central Asia route. The enduring criticality of energy logistics was highlighted when retired General James N. Mattis entreated the US Department of Defense to “unleash us from the tether of fuel.” The 2010 test deployment of portable solar-powered generation systems at US Marine forward operating bases in Afghanistan reduced the bases’ diesel generator usage by more than 90 percent.

These examples reinforce the primary objective of militaries – mission assurance and decisive advantage on the battlefield. Yet resupplying energy to combat theaters and the battlespace edge is a vulnerability, so minimizing the energy required for vehicles and forward locations and diversifying fuel use are among the economic considerations of military energy use. The US Department of Defense, for example, is the largest US government user of energy. Within constrained budgets, volatile energy costs represent a source of a risk to military operations. In response, the Pentagon initiated plans to measure, manage, reduce and diversify energy use on both installations and in ships, planes, and ground vehicles. The military has deployed microgirds on installations and in combat theaters that efficiently integrate solar power and energy storage, which has increased energy resilience and reduced the amount of fuel needed at the battlespace edge. The military has made similar investments and procurements that have advanced energy storage, improved building efficiency, reduced computing power requirements, and furthered propulsion electrification and efficiency. Defense procurement of gas jet engines in the 1940s and 1950s led to technologies that would also advance natural gas power plants. The need for nuclear deterrence and silent uninterrupted naval propulsion led the US Navy to develop the naval nuclear reactor, and innovations quickly spilled over into civilian use to kickstart the nuclear power industry.

UN Peacekeeping Operations are noteworthy for the explicit policy consideration to the minimization of environmental damage. The operations consisted of around 115,000 staff in 16 countries at the end of 2012, representing 55 percent of emissions of the entire UN system. Until recently, the decisions regarding adoption of renewable-energy sources and energy-efficiency measures were handled at the individual mission level, lacking general UN-wide policies despite the potential for cost-savings. In recent years, the United Nations shifted to a broader policy of reduced energy consumption and environmental sustainability with operational guidance for all field missions. As an example, a UN mission in Timor-Leste monitored energy use and included solar applications, with annual cost savings of about US$335,000.

In 2006, NATO debated “energy security,” determining it as a priority and mandating member countries to define its role. In 2012, a NATO Energy Security Centre of Excellence was founded in Lithuania, joining other NATO centers that provide strategic analysis and research, development of standards and procedures, and education and training. NATO members collaborate in exchanging smart-energy solutions.

The US Department of Defense has long acknowledged the threats posed by climate change, recognizing that sea level rise, extreme weather and changing climate will drive political instability in trouble spots around the globe. Doughts, wildfires, storms, and flooding already impose significant costs for military installations

Military leaders have been at the forefront of energy innovation and resilience. DOD has increased deployment of renewable energy, preparing for outages due to hurricanes and other disasters. Renewable energy and microgrids augment diesel generators that need refueling and even the main electrical grid, which can prove unreliable in an emergency. Other energy initiatives – portable solar installations and waste-to-energy systems — reduce the amount of diesel fuel that must transported to troops operating in remote areas along with the costs and dangers of such operations.

The world is on the cusp of an energy transition, with dramatically shifting technology priorities, and the United States is not alone in the need to both solve energy challenges and advance military technologies. Another factor is protecting bases and facilities from the consequences of climate change. There may be a growing opportunity for a reverse flow, civilian to military, in energy innovation especially as one considers the greening of military operations. Longstanding vulnerabilities and challenges of fuel logistics spurred enormous progress in military technology. Increased energy intensity of conflict may encourage efficiency and development of renewable fuels, and winning or avoiding wars could depend on such innovations.

This essay is based on a working paper for the University of Cambridge Energy Policy Research Group.

Constantine Samaras is an associate professor in the Department of Civil and Environmental Engineering at Carnegie Mellon University.

Morgan D. Bazilian is professor of public policy and director of the Payne Institute at the Colorado School of Mines.

Dr. William J. Nuttall is professor of energy at The Open University, based in Milton Keynes, UK.

Home » Energy And The Military: Leading By Example – Analysis